Unclean Jobs for Women and Girls: Stories (Art of the Story) 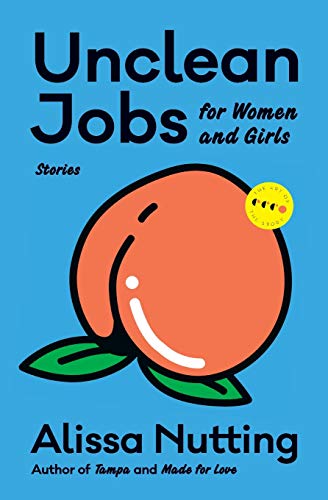 Alissa Nutting’s second book, Tampa (2013), shocked readers with its story of a middle school teacher who regards her male students as sexual prey. Yet the novel never became unreadably sad or horrifying; instead, she brought a sly, sharp humor that ran like a knife through the whole piece, cutting protagonist and reader alike.

Readers who were familiar with Nutting’s debut short story collection, Unclean Jobs for Women and Girls (2010), were undoubtedly better-braced for Tampa’s dark humor. Unclean Jobs has recently been re-issued as part of Ecco Press’s The Art of the Story series, which puts Nutting in the distinguished company of literary masters such as Anton Chekov, Joyce Carol Oates, and Tobias Wolff. Nutting steps into this party laughing and on fire, disturbing generations of style and finely honed observations and devouring the party-goers along with the hors d’oeuvres. Her characters leap from her forehead to gnaw on the waitstaff’s horrified limbs.

It’s the best party in years.

Unclean Jobs for Women and Girls subverts generations of moral guidance by dives into possible female “professions”: Model’s Assistant, Deliverywoman, Gardener, Ant Colony, Trainwreck. Each story spews forth alarming possibilities of what women can do and what they can be. All previous expectations break down.

Other contemporary writers have worked with this surrealist approach, but none have done it so well as Nutting. Karen Russell allows the implied to become vividly real, and George Saunders breaks the ordinary world into magical melancholy, but neither achieves Nutting’s sharp wit and clear purpose. America is not just uneasy in its sleep. Nutting writes of a world on the brink, or already on fire, or screaming joyously towards apocalypse.

This re-issued version of Unclean includes an introduction by the author, wherein she discusses the childhood roots of her unease. In her introduction, and in each of her stories, Nutting asks, “What’s more nonsensical than mistaking danger for safety? Indifference for love? Worse for better?”

Each story is an individual, character-driven piece narrated by its protagonist. The women explain not only their place in the universe but their fears and desires. They know what they want, or examine their motivations, even as their worlds crumble around them. Self-delusion runs rampant, but it also rules the universe: if anyone here saw themselves clearly, all hell would break loose. (Hell does break loose. They build a roller-coaster. Hordes of hell-bound nurses assemble to care for the mangled and undying, dedicated to their profession even as their fury threatens to drive them to sadism.)

Why shouldn’t hell break loose? Nutting’s stories ecstatically break down realist boundaries. She suggests, in the architecture of her worlds, that the realist story is impossibly restrictive. Two centuries of male dominance have reduced women’s narratives to wife, mother, and whore.

To fully exist, Nutting’s women break the walls of reality. They pursue romance with cannibals and fall in love with garden statuary. Their longing for children drives them to steal baby pandas and television child stars. They have sex on the moon and boil up for dinner. They pursue a quiet romance in hell.

Men still exist. Their lives intersect women’s, but Nutting exposes male fragility in all its defensive ugliness. A male reality star, under his co-star’s gaze, is only “not completely repulsive. . . . The fact that he knows this, that he’s receiving ‘hottie billing,’ makes him so much more sleazy and disgusting than the others. He is in no way actually attractive.”

Women, so often reduced to their beauty, strut their allure with confidence: “My haircut looks like the wigs men don when they want to pretend they are living in the era of Shakespeare. The bangs are totally harsh. I have wanted to tell cashiers, Slit your wrists on my bangs, harlot! when they are rude to me, especially when they give me an amused look as I’m buying prophylactics. I know what they’re thinking: That I have no use for them.

Many story collections provide charm without resilience. Almost ten years after its first release, Unclean Jobs for Women and Girls revels in its longevity. It settles into the bloody mess of American literature with a smirk and strokes its obese, disabled cat while the audience struggles for composure.

It is a disgusting, disturbing, magnificent book.