The Unbroken Thread: Discovering the Wisdom of Tradition in an Age of Chaos 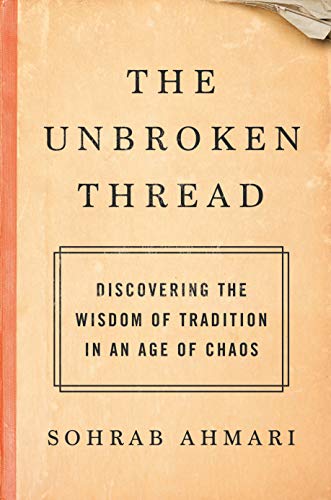 “The Unbroken Thread . . . is a book of philosophical questions, and the answers to those questions, Ahmari believes, are to be found in the ‘great traditions’ that Western modernity has abandoned in the pursuit of individual happiness and hedonism.”

Whittaker Chambers began his great autobiography Witness with a letter to his children in which he told them that in the book he was leading them to Golgotha (the site where Jesus was crucified), so they could understand that “life is pain, that each of us hangs always upon the cross of himself.” Wisdom, he wrote, is learning and understanding this eternal truth.

The young conservative writer Sohrab Ahmari, who emigrated from Iran to the United States at age 14, ends his book The Unbroken Thread with a letter in which he advises his son Maximilian to cling to the best of tradition, make big decisions “in light of sound authorities, above all of the Holy Church,” to seek the “moral way” and to act upon traditional moral precepts, and to be guided by the Blessed Virgin Mary: “She will tell you everything that truly matters to a happy life.”

The Unbroken Thread, as the author tells us, is a book of philosophical questions, and the answers to those questions, Ahmari believes, are to be found in the “great traditions” that Western modernity has abandoned in the pursuit of individual happiness and hedonism.

In the book’s Introduction, Ahmari presents the example of Father Maximilian Kolbe, a Catholic priest in Poland who, while imprisoned by the Nazis at Auschwitz, willingly sacrificed his life for another. Ahmari writes that Kolbe “climbed the very summit of human freedom . . . by binding himself to the Cross, by denying and overcoming with intense spiritual resolve, his natural instinct to survive.”

Kolbe’s “form of freedom,” Ahmari explains, “is at odds with the account of freedom that prevails in the West today.” “We have abandoned Kolbe’s brand of freedom—freedom rooted in self-surrender, sustained by the authority of tradition and religion—in favor of one that glories in the individual will,” he writes.

We live today in the West in what Ahmari calls an “anti-traditional age.” Western contemporary philosophy based on the European Enlightenment that “sought to liberate man from the dead hand of tradition” has led us astray.

Ahmari uses C. S. Lewis to answer the question: How do you justify your life? Lewis in his fiction examined the danger of “scientism,” which Ahmari defines as treating humans as raw material and objects of scientific inquiry. Scientism is amoral. It claims to have “an exclusive monopoly on knowledge” and made eugenics fashionable. Lewis warned that “if man chooses to treat himself as raw material, raw material he will become.”

The author has Thomas Aquinas answer the question: Is God reasonable? Many scientists and others who deny the existence of God often contend that God’s existence is an act of faith divorced from reason. Aquinas disagreed. Aquinas, Ahmari writes, believed that God was the source of both faith and reason, and he used Aristotelian logic to argue that “the philosopher, unaided by revelation and without appealing to feelings, could prove God’s existence.” Aquinas in his writings established “the existence of a necessary being, on which hangs quite literally the existence of everything else.”

Ahmari’s other dissident thinkers add to the corpus of great traditions:

*Rabbi Heschel explained the importance of the Sabbath as a day of rest and paying homage to God.

*The Turners, who studied African tribal rituals in Zambia, came to understand the congruity of rituals and religion.

*Thurman, a black man who grew up in the Jim Crow South, saw how religion was used by men to uphold racism, but learned from the study of Jesus’ public ministry that human dignity derives from God.

*Augustine of Hippo rejected Roman notions that religion should be banned from the public square and set forth the ideal of Christian statesmanship.

*Confucius taught that honoring parents and elders “is the root of virtue and the wellspring of instruction.”

*Newman believed that an objective moral law and authority formed individual consciences and decried the “cultural rupture between conscience and authority” so prevalent in the West today.

*Solzhenitsyn by his courageous example as a political prisoner and dissident in Communist Russia showed a more profound appreciation for freedom under tyranny than many in the free West. And in his famous Harvard commencement speech, he scolded the West for failing to distinguish between freedom for good and freedom for evil.

*Dworkin, although not a traditionalist, shared traditionalists’ abhorrence of unlimited sexual freedom and the ubiquity of degrading pornography.

*Jonas rejected Gnosticism and nihilism, and believed that humans should submit to “limits, norms, and responsibilities.”

*Seneca, a Roman philosophical stoic, showed us that the quest for immortality is futile, and that the certainty of death enables us to fully appreciate sacrifice, heroism, love, beauty, and virtue.

Ahmari’s book is an appreciation of what Russell Kirk once called “the permanent things,” the great traditions of Judeo-Christian and Western civilization that have too often been surrendered at the altar of modernity. He reminds us that “[t]he realm of progress can’t fulfill our soul yearnings or satisfy our urge to put ourselves right with the sacred.”