The Tyranny of Dead Ideas: Revolutionary Thinking for a New Age of Prosperity 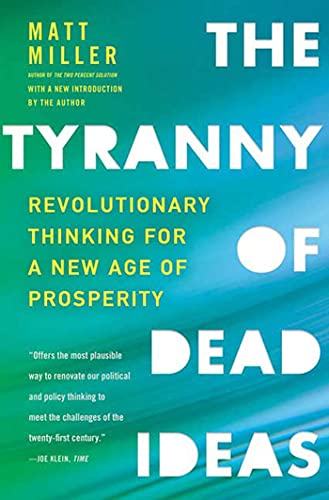 Ideas are profoundly important, yet many are innocent of the phenomenal power of ideas. Renowned economist John Maynard Keyes proclaimed:

“The ideas of economists and political philosophers, both when they are right and when they are wrong, are more powerful than is commonly understood. Indeed, the world is ruled by little else. Practical men, who believe themselves to be quite exempt from any intellectual influence, are usually the slaves of the ideas of some defunct economist.”

Ideas guide decision rules and inform strategies. To this end, Harvard Business School anchors its curriculum on the proposition of imparting essential “currently useful generalizations” to its students who would master business administration.

But what if these decision rules, generalizations, and strategies are anchored in ideas that are no longer relevant, currently useful, or even “alive”? What if not just those who originally advanced the ideas are dead but the very ideas themselves are dead?

According to Mr. Miller, our contemporary society rests on dead ideas, which are no longer valid. So long as society and the economy it supports operate as if those ideas were still alive, visible, and useful, the inevitable consequences, Mr. Miller suggests, are frustration, performance shortfalls, economic un-competitiveness, social dissatisfaction, and worse.

The author argues in the United States that thinking is today dominated by the tyranny of dead ideas, reflecting the failure to adapt. His thesis is that “our old ways of thinking are preventing America from adapting to the challenges now posed by globalization.”

• Our kids will earn more than we do.

• Free trade is “good”—no matter how many people get hurt.

• Your company should take care of you: Business rather than government should be responsible for your healthcare and pension.

• Taxes are always too high.

• Schools are a local matter.

In his view, these ideas are no longer valid. These dead ideas have effectively been destroyed by four primary forces:

2. Rush for the exits—Business moving away from providing increasingly expensive health care and pensions.

3. Gray boomer fiscal squeeze—Growing pension and healthcare needs, because of demographic forces that impose burdens on government, at the very time fewer people are working to pay these costs.

Mr. Miller observes that the impacts of these forces will only accelerate in the next decade. Skillfully illuminating his policy analysis with stories and case studies about the six dead ideas and primary forces, the author provides a trenchant commentary on the consequences of institutional thinking lagging contemporary, changing societal realities.

The challenge is to understand the accepted ideas, assess their viability or “aliveness,” then craft strategies and employ decision rules appropriate to those ideas. And, to the extent the currently dominant ideas of society reflect a failure to adapt to—and therefore are not congruent with—the new realities, the challenge is magnified. This magnified challenge, which aptly characterizes contemporary times, is to proceed in ways that recognize the constraints and risks of a society dominated by old thinking and institutions anchored in that old thinking.

In some ways, the challenge is analogous to driving aggressively in a car race but during brief pit stops, devoting attention and resources not just to changing the tires and taking on new fuel but concurrently to rebuilding the car itself. If you do not drive the old car fast, you cannot keep up. But if you do not design and build an even faster, very different new car, you may not be in a position to contest for a high place, let alone even finish the race.

While Mr. Miller advances the premise that globalization is the primary challenge the country faces, the issues are more nuanced, complex, and multifaceted than he outlines. Nonetheless, the message and implications of this book merit a wide audience.

Individuals, executives with managerial and leadership responsibility for enterprises, and policy makers are influenced by the ideas that they embrace and rely on. To the extent those ideas are premised on old, no longer relevant thinking, then the actions that follow must inevitably disappoint.

The importance of new thinking on many issues of the day cannot be overemphasized. Mr. Miller’s call to thinking, specifically new thinking leading to new ideas, echoes Albert Einstein’s insight: “The current problems we face cannot be solved at the same level of thinking by which they were created.”