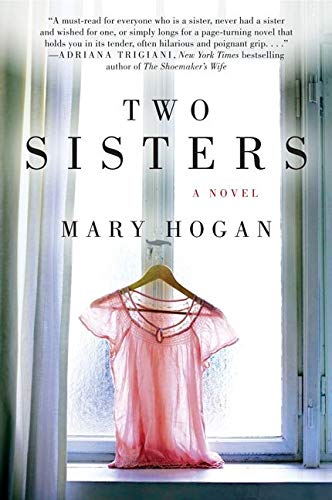 “. . . digs deep into emotions getting to the heart of family dynamics.”

Sharing the same DNA does not make a family, as is evidenced in Ms. Hogan's debut adult novel, Two Sisters.

Rhode Island native Owen Sullivant meets Lidia Czerwinski, who sweeps him off his feet with her charm and beauty. Already involved in a stifling relationship where he is expected to propose, he instead asks Lidia to be his wife. Her pious Polish parents reject the Irishman especially after learning Lidia is pregnant.

Several months later, Lidia gives birth to daughter Pia, a beautiful, mesmerizing child who captures her mother's heart. Embarrassed by his granddaughter's early arrival, Lidia's father pulls strings to get Owen employment in New York City, away from them so they will not be the ridicule of their friends.

The young couple settles into their life with Lidia totally besotted by her infant making her relationship with Owen strained. When Logan is born, Lidia sighs with relief; now Owen has his son, and she has her daughter, and they center their lives on their children and not each other.

Years later, unwanted Muriel joins the family, becoming the fifth wheel. Much younger than her siblings, Muriel gets ignored by Logan while Pia constantly bullies her. Worse is the constant indifference and ridicule she receives from her mother.

Things seem to turn around for Muriel when Lidia escorts her on weekly outings to Broadway shows. For once, Muriel feels wanted and loved, and sharing special "girl time" with her mom is the highlight of her life. Lidia feigns different excuses to leave Muriel alone in the theater: headaches, the need for fresh air, etc., until one day Muriel finds herself deserted after the play. She wanders outside seeking Lidia only witness to a shocking scenario, which brings their weekly excursions to an end.

Lidia's escalating revulsion toward her daughter is shown in the following passage:

"Aside from her trembling, Muriel remained still. . . . Steely eyed, she didn't back down, only fixated on the jet plume of red smeared across her mother's lips and the bloodshot bulging of her eyeballs. For the first time, she saw hatred in those eyes. Where before she'd seen indifference, impatience, even disgust, she not recognized the unmistakable blackness of a contempt so deep it had probably been there all along. . . . Once you see darkness like that in a mother's eyes, it's hard to ever again find light."

Muriel, understanding she will never have the family she envisions, moves into the city and seldom contacts her parents or siblings. The few times she is in their presence, her mother and sister recount all her faults, whereas Lidia praises her adored Pia.

One day Pia arrives at Muriel's apartment unannounced and drags Muriel out to lunch. Muriel senses something is amiss; Pia's actions are out of character. Pia confides some distressing news, begging Muriel not to reveal her secret to anyone. Muriel, always the keeper of confidences, does not know if she can comply.

To say the Sullivants are dysfunctional only bumps along the surface of their situation. Secrets, hurts, distrust, and disloyalty abound, and one can't help to recognize the anguish, not just for Muriel, but for all of them.

Several plots elucidate each character's situation showing the gut-wrenching existence they endure. Though chapters hop between the current day and the past, as well as offering differing points of view, the prose flows with ease so as not to disjoint or complicate the story.

Gripping and thought provoking, Two Sisters digs deep into emotions getting to the heart of family dynamics.