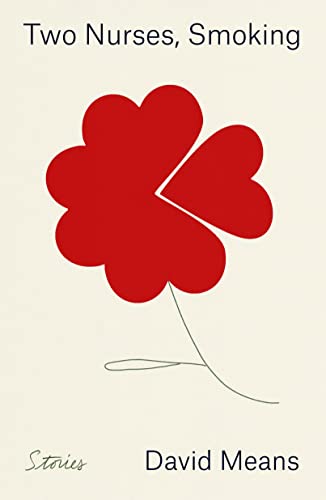 “We’re in the presence of an author both wholly assured and tentative, both nagged by the complexities of narrative and able to exploit them.”

David Means has long been acknowledged as a present-day past-master of the short story. And in this, his seventh volume, he extends his range. Two Nurses, Smoking consists of ten short fictions that both demonstrate and expand upon his particular skill: the focused examination of a small-scale crisis that enlarges till the reader shares its private triumph or woe. Means laments and exults in the human condition; he’s both microscopic and telescopic in the scenes he shows.

This collection’s characters are mostly middle-aged. Mostly, they live in or travel to rural New York (the author teaches at Vassar College in Poughkeepsie); they love to ski and have failed marriages or troubled childhoods and have lost a child, either through a mortal accident or via alienation. The title piece, “Two Nurses, Smoking,” tracks the slow courtship of two troubled souls, and does so with tact and precision. There are cigarettes and drinks and drugs in many of the stories, a modicum of financial prosperity, a situational poverty, an exacting love of nature, and very few last names. Often, there’s an epiphanic moment of delight at action’s end. Here’s a representative passage, and the last sentence of “Vows”: “In an average life lived by a relatively average soul, what else remains but singular memories of astonishingly framed light?”

Characteristic, too, is the yoking of physical action to spiritual perception. Here, from
“Stopping Distance: “On the way to the lodge, holding her skis, she was aware that she was putting everything into a single symbolic basket, making way too much of the fact that on the way down the hill in the exhilaration of movement, in her concentration on her legwork, she had forgotten to think about anything at all except reaching the bottom without a spill.”

The stories are not always simple to follow or track in terms of throughlines. Routinely, the narrator jumps back and forth in memory, and memory is digressive; the reader moves from present action to remembered conflict, and we’re likely to fast-forward and then retreat in time. As Means writes, in “First Encounters,” “You grant yourself the grace of a story, but then it goes away. People spin stories around your loss. The unimaginable is the most fearsome thing.”

One or two of the pieces here—most notably, perhaps, “I am Andrew Wyeth!”—strain toward the “unimaginable.” We never are quite certain when the author throws his voice—if the first person should be taken at face value, or if the narrator is delusional and following the actual painter’s lead. But mostly these fictions move seamlessly from overheard speech and gestures observed to comments on human behavior writ large, as in “Are you Experienced?”:

“From upstairs there came a grunt, the clearing of phlegm, a cough or two, more grunting, and then a voice that said, Who’s that? Who’s there? It was a tart, central-Michigan, farmhand voice, confined within the nose. (Meg didn’t know it at the time, but she was hearing the intonations of a widower, the voice you’d hear from someone interrogating himself in the mirror with total contempt: a voice that made complete sense when the old man finally came down the stairs, dressed in a tattered old maroon robe, and presented a toothless mouth set in a gaunt face). Staying on the bottom step, he looked at Billy, coughed twice, and said, What the hell do you want from me?”

Here the narrator shifts from close description of the voice to colloquial spoken language—Who’s that? Who’s there?— to a parenthetical fast-forward where we enter Meg’s mind and know what she has not yet learned, then see in detail what she sees, then watch the “old man” watching Billy and asking, in the real time of the tale’s encounter, What the hell do you want from me? It’s masterful, really, and characteristic of the way Means moves—from the specific to the general and back again, without a hitch in his stride.

A certain amount of the prose here deals with the matter of prose fiction as such and constitutes a master-class in how to tell a tale. In the final story, “The Depletion Prompts,” the author advises:

“Write a rant inside the story against the concept of prompts as a tool, as a way to write, and in doing so explain that the prompt itself is always a form of limitation, a matter of forcing the writer into a prefabricated box, into an imitation of some other voice . . . Use as an example the idea of instructions as a prompt, explain that someone—a writer you admire—originally wrote a story (several stories, actually (that took the form of instructions, or how-to (avoid naming her name, for the sake of propriety). And then lament the fact that when you were reading stories by other writers, you couldn’t help but feel her prompt lurking offstage—a shadow, maybe even a presence brushing the curtain fabric, revealing a shoulder, or am arm—and breaking the dream apart, although you’ll admit in this story that you’re too sensitive and prone to grandiosity when it comes to these things, detailing an aesthetic belief system before you let the story peter out into a formality that is horrifically stiff, letting go of any intention at all you might have to tell a story, and leave it at that. Let it go.”

Here the writer references—or so this reader assumes—the trend-setting collection, Self-Help, published by Lorrie Moore as long ago as 1985. He manages at one and the same time to praise and lament the idea of “prompts,” to give you “a shadow, maybe even a presence brushing the curtain fabric, revealing a shoulder, or an arm,” then to break “the dream apart.” We’re in the presence of an author both wholly assured and tentative, both nagged by the complexities of narrative and able to exploit them. Note how the story becomes one in the very act of descrying its own strategy; note how the second person address involves both “You” and, implicitly, “I.”  Leave it at that. Let it go.