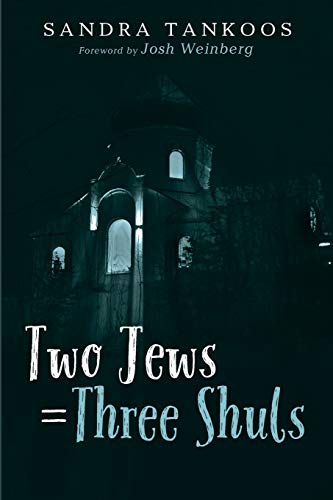 “Two Jews = Three Shuls is a small book, and Sandra Tankoos does a good job of guiding the reader through twists and turns until the real murderer is uncovered.”

“Who would kill a beloved rabbi?” That’s the question that keeps getting asked throughout the novel, Two Jews = Three Shuls by Sandra Tankoos. As the story unfolds, a question arises: “But was he beloved?” It is a question that is never quite answered, at least not overtly.

It is 1992 and Deborah Katzman, President of Beth Torah Synagogue, is rudely awakened by an apparition. Rabbi Saul Levinson hovers over her bed, speaking to her, but she is unable to understand his words. She considers this a disturbing dream until she receives a telephone call from Leon Feldman, the Administrator of the synagogue. He is in a state and can’t be calmed down as he announces the rabbi’s death. Making it worse, the rabbi was murdered!

Deborah is the person who instills calm in the congregation, and it now falls to her to get to the bottom of this horrific event. With the assistance of her husband, Dr. Carl Katzman, she dives into the chase. But as she begins her search, the question returns, “Was he beloved?” To her surprise, she’s finding the answer may be negative.

The search comes close to home as Detective Brody, working with Deborah, directs her to the possible suspects right in the community rather than outside. For a short moment the question of suicide arises, but they cast aside that possibility very quickly.

Tankoos does a good job of unfolding the story and following the clues that arrive, but it is clear that Two Jews = Three Shuls is more a story that is character driven than plot driven. She develops her characters with their clear reasons to, and to not, be the final suspect.

Each of her characters has a backstory that brings out their issues with the good rabbi: Leon Feldman, the administrator; Joyce Kaplan, a leader of the YCC (Young Couples Club); Esther Levinson, the Rabbi’s wife; Rita and Lester Calderon, supporters of a modernized synagogue; Simmy Monash, the president of the Synagogue Brotherhood; Joey Miller, a young attorney.

Joyce Kaplan wants to see the synagogue become more modern with regard to women’s roles in its services, but Rabbi Levinson over the years has moved further and further toward traditional and more conservative activities. No, women have their place in the community, and he will see no changes. Could her desire to modernize women’s roles drive her to murder?

Fred Kaplan, Joyce’s husband, agrees with her goals, but then again, he agrees with everything she does and says. Could he murder the rabbi in to achieve his wife’s goals?

Simmy Monash, president of the Synagogue Brotherhood, is a fierce advocate in finding the rabbi’s murderer—and the quicker, the better. To her horror Deborah discovers dirty little secrets that Simmy has been hiding for years. Could the rabbi have also uncovered these secrets? And what would be the outcome for Simmy if he had exposed them? Does Simmy complain just a little too much?

Leon Feldman is a great defender of the rabbi; but as Deborah digs further into the character of the community, she begins to uncover issues, and Leon is right in the middle of them. Could he have murdered the rabbi to cover up his sins?

Esther Levinson, the rebbetzen, is devoted to her husband early in their marriage, but her inability to conceive a child drove a wedge between them. In public, her devotion is not questioned, but in private, the marriage is riddled with despair. Is murder the way out of the marriage for Esther?

Rita Calderon, an officer of the YCC and her husband, Lester, a “popular matrimonial attorney” agree with Joyce and Fred about modernizing the synagogue, but they have their own dirty little secrets to keep from becoming public. Is murder the answer to sustaining their privacy?

Rabbi Levinson refused to conduct a traditional marriage ceremony for Joey Miller because his fiancé was Buddhist, in spite of the guarantee that their children would be raised Jewish. Surely this is a good reason to commit murder?

Tankoos gives the reader a virtual feast of characters and enough backstory on each to create great suspects. The backstories abound in this novel, and while that tool can often move the story off track, in this instance, because Two Jews = Three Shuls is character driven, the backstory for each character provides more evidence for the reader to decide who is guilty, while at the same time flipping those decisions. This solidifies the story as a good mystery.

There is, however, an issue of side stories that do tend to drive the tale off track. Deborah and Carl’s sons and their band get a good piece of the story but have nothing to do with the rabbi’s murder. And in the middle of the murder investigation, Deborah is approached by Joey Miller to to navigate through the sale and purchase of a local golf club by his parents, Oscar and Monica Miller. Tankoos devotes a lot of time to this process, and although there is a connection to the rabbi’s murder through Joey, it is slim at best.

Two Jews = Three Shuls is a small book, and Tankoos does a good job of guiding the reader through twists and turns until the real murderer is uncovered. It is a fun book to read, and an educational one for everyone, despite one’s religion or lack thereof.