Twilight Warriors: The Soldiers, Spies, and Special Agents Who Are Revolutionizing the American Way of War 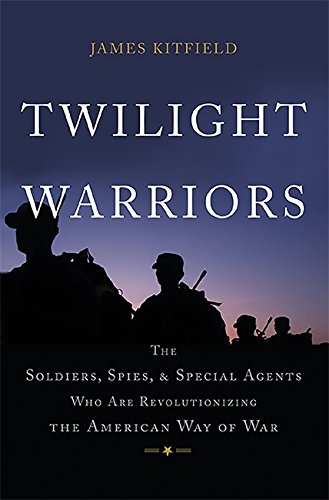 “Twilight Warriors is a textbook on the modern world’s gravest infliction.”

Like any good adventure story, James Kitfield has decided to tell his tale by focusing on the exploits of a merry band of brave warriors. These hardy men even have a catchy name: The Irish Brigade. Unfortunately, Twilight Warriors is not some Tolkien-inspired jaunt through Middle Earth, but rather a sobering depiction of the U.S. war machine in action.

The men of Kitfield’s in-depth reportage are General Martin Dempsey, Lieutenant General Michael T. Flynn, General Stanley McChrystal, General David Petraeus, and Brian McCauley, a former deputy assistant director for the FBI’s international operations. Not all of these men are “Irish” per se, but all share the Celtic race’s predilection for pluck, rebelliousness, and tragedy. More importantly, the men Kitfield profiles all share a unbreakable bond—a brotherhood of titanium that was forged during the bloody counterinsurgency operations of Iraq and Afghanistan.

For a novice, Twilight Warriors offers a crash course in the history of American anti-terrorism operations. Beginning in 1998 with the FBI’s investigation into the deep connections between the Boston underworld, a certain commercial fishing boat in Gloucester, and gun-hungry terrorists in the Irish Republican Army, Twilight Warriors goes on to chronicle the rise of Islamic terrorism before and after the Al-Qaeda “spectacular” of 9/11.

All the major villains are present: Osama bin Laden, ISIS, Al-Shabaab, Al-Qaeda in the Arabian Peninsula, Anwar al-Awlaki, the Taliban, Ansar al-Sharia, and the Haqqani Network. Well-known and well-publicized terror attacks, from the Westgate shopping mall in Nairobi to the Bataclan in Paris, are also present. In sum, Twilight Warriors is a textbook on the modern world’s gravest infliction.

Incredibly, at every scene, Kitfield’s men are there to piece together parts of the puzzle left behind by the terrorists. Such attentiveness to detail was learned the hard way after IEDs and suicide bombers in Iraq and Afghanistan threatened to turn those wars into America’s second and third Vietnam.

In those crucibles, the Irish Brigade and others developed what Kitfield’s subtitle terms “the American way of war”—a new, multifaceted and multi-agency approach to intelligence gathering and execution.

Composed of numerous acronyms, including JSOC (Joint Special Operations Command), F3EA (find, fix, finish, exploit, analyze), and ISR (intelligence, surveillance, and reconnaissance), this thoroughly American approach to counterinsurgency begins first with the notion that intelligence is key, then proceeds with the understanding that targeted raids and well-orchestrated interrogations are major structural supports to the larger battle for taking and keeping territory and winning “hearts and minds.”

As inspiring as Kitfield’s accounts is, it is also extremely angering. For every accomplishment of the Irish Brigade, there is a setback. When General McChrystal looked like he was on the verge of achieving a major breakthrough against the Taliban in Afghanistan, Michael Hastings’s story in Rolling Stone, “The Runaway General,” quoted nameless subordinates who let off steam about President Obama, Vice President Biden, and others. Within days of publication, McChrystal was no longer the commander of US and ISAF forces in Afghanistan.

Lieutenant General Flynn, who was brought in as the head of the Defense Intelligence Agency in order to ruffle some feathers, was next on the chopping block because he had the gall to tell the Obama administration the truth about the increasing threat of international terrorism, even after the death of bin Laden. All told, as much as Twilight Warriors focuses on the stupid interagency squabbles between the CIA, FBI, NSA, and others, it highlights the even bigger divide between America’s civilian leadership and its military.

Because it is so thorough, Kitfield’s book at times treads over well-worn ground. Twilight Warriors has a problem with repetition and an even bigger problem with short-term memory loss (it’s not uncommon for Kitfield to repeat whole phrases in the same paragraph or to talk about the same event in the exact same way on two different pages). It’s likely that these kinks will be corrected before the final release date, and it’s just as likely that the book’s noticeably bad grammar will likewise be altered for the better. Either way, any concerned American citizen can find something worthwhile in Twilight Warriors, even if that something is a cold shudder of fear.