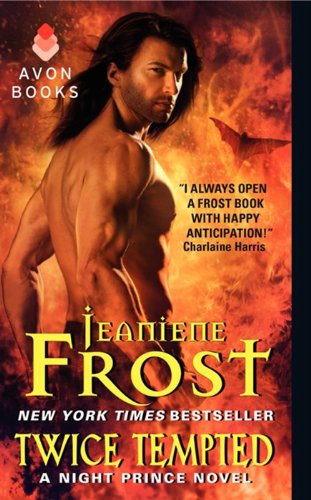 Twice Tempted is the second book in Jeaniene Frost’s Night Prince series, an extension of her Night Huntress series.

The prince in this series is vampire Vlad—don’t call him Dracula—Tepesh. He wields the power of fire and can read minds, and is among one of the more powerful vampires that exist in this universe.

Vlad’s love interest is Leila, a young woman with extraordinary powers of her own. In the previous book, Once Burned, Vlad and Leila met and began a relationship that Vlad very honestly told Leila would never turn to love, at least on his part.

As Twice Tempted opens, Leila admits to herself, and to Vlad—thanks to his mind-reading abilities—that she’s fallen in love with him, but he remains reticent and distant. When she wrongly thinks he’s going to propose, and is subsequently embarrassed, she ends the relationship, knowing he will never give her the one thing she most wants from him: a declaration of love.

“‘I can’t be with you,’ I summarized. ‘It hurts too much to be close to you, but continually pushed away.’

His expression changed to disbelief. ‘You’re leaving me?’

From his tone, the idea was more shocking than hurtful.”

Striking out on her own, she returns to the job she had before she met Vlad and was whisked off to Romania: circus performer. Soon, though, her life is in danger and she relies on an associate of Vlad’s to find out who’s trying to off her. In the process, she begins to question whether it may have been Vlad himself, in a fit of anger over her leaving, who tried to have her killed.

The rest of the book revolves around Vlad and Leila coming back together, and them trying to figure out who is trying to have her killed.

Unfortunately the book suffers from being told in first person. While not knowing what Vlad is thinking somewhat adds to the mystery, especially while he and Leila are apart, at no point would anyone think Vlad tried to have Leila killed.

And when Vlad finally does admit his feelings for Leila, it feels abrupt and forced. Vlad recounts the previous few weeks to Leila, and how he’d been feeling while they were apart, but it doesn’t feel natural. It feels like a speech meant to fill the reader in on information they would have known had the narrative been told in third person.

Leila’s life is in jeopardy no fewer than four times during the course of the book, and while she manages to save herself more often than not, a plot device used over and over in the same book starts to feel tired after a while.

Ms. Frost’s books are generally very enjoyable, but Twice Tempted often felt predictable and dry. The characters don’t go through much development—simply acting on feelings they’ve had all along, and the plot, though it moves quickly, is never particularly surprising.