Twelve Tribes: Promise and Peril in the New Israel 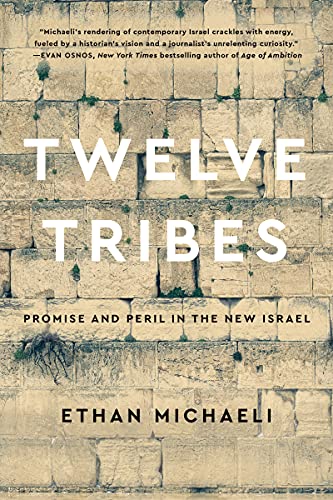 Ethan Michaeli offers a rich and varied portrait of Israel through the many kinds of people who live there, groups he calls “tribes,” both as a reference to the biblical tribes and to the tight-knit communities within the broader Israeli state. He’s well-situated to act as a guide, with Israeli parents and a range of connections that allow him access to a wide variety of people:

“utilizing my Hebrew skills to gain access to Israelis, and my American-ness to cross internal borders between Israeli ‘tribes’ as well as between Israelis and Palestinians, abjuring pundits, politicians, and thought leaders in favor of those who could more forthrightly comment and reflect on the realties of daily life.”

The book opens with the demographic difficulties facing the country, with the highest birth rates among the Haredi (the ultra orthodox) and the Palestinians.

“Where some imagined that Palestinian Israelis could be transferred out of Israel, or that they could dilute the numbers of Haredim by forcing them into military service, he [President Rivlin] dismissed these ideas as not only unworkable but unconscionable. . . . instead of banishment or discrimination, Rivlin proposed distributing resources and opportunities more equitably in order to create a level playing field, that, respecting the integrity of each ‘tribe,’ would allow them all not only to benefit but to contribute.”

The rest of the book tries to answer whether this solution could work and what would it look like, what does each “tribe” want? From the ultra-orthodox to Israeli Arabs to Druze and Bedouins, Michaeli interviews everyone he can find who has a distinctive view on the complicated problem the modern state of Israeli presents. Along the way, he gives capsule histories of Jerusalem, Jaffa, Haifa, showing the different forces that have interacted over centuries in the tiny country. His short paragraph on Jaffa is a good example of a lot of information quickly and clearly conveyed:

“The great general Saladin and Richard the Lion-Hearted fought bitterly over Jaffa, but it was finally absorbed into the expansive Ottoman Empire in 1515. In the first few centuries of their occupation, the Ottomans kept only a small garrison there, but after those troops were overwhelmed and massacred by Napoleon’s expeditionary force, it was fortified with soldiers and settlers, Arab Muslims as well as Jews, Armenians, Turks, and others from throughout the dominions. Jaffa thrived, and at the end of the nineteenth century, a trickle of European zionists began to arrive as well. Tel Aviv, adjacent to Jaffa, was founded in 1909 as a suburb for those Europeans, and remained smaller and dependent on Jaffa in these years. This was a bloody period, with mob murders of Jews by Arabs in 1920–1921, and again in 1936, and then, during the 1948 War of Independence, a mass expulsion of Arabs, followed by military control for those who remained until 1966.”

If there’s a fault in the book, it’s the lack of female voices. There are some, but nowhere near enough, especially on the Palestinian side. The conversations with the different groups of the ultra orthodox skate over the issue that a woman writer would not have been granted the same access, the same courtesy, the same information that Michaeli could get as a man. Of course, he couldn’t talk to Haredi women, but that’s also not mentioned.

Despite this lack, there is otherwise a wide variety of voices, and Michaeli introduces the reader to an interesting group of people, a compelling landscape, and some delicious-sounding meals. He finishes the book on a hopeful note, that the diversity of voices he profiles will be heard, that each tribe will find a basis for a “pragmatic solidarity . . . allowing individuals to take pride in their heritage while living in peace with their neighbors, collaborating to maximize their collective resources while expanding their mutual opportunities.”  This is the vision Rivlin suggests at the book’s opening. It’s one that Americans could look to as well in these highly polemical times of deep partisanship, which is, after all, yet another kind of tribe.