The Trustworthy One (The Walnut Creek Series #4) 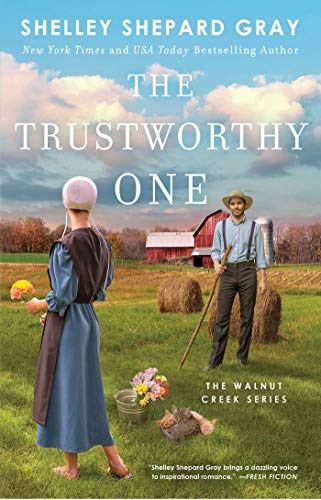 Kendra Troyer spends most of her young life caring for her younger siblings and protecting them from their abusive father and submissive mother. She bears the scars of many beatings received for no other reason than her father is easily led to violence. All she wants is to get out of her Amish community in Walnut Creek and find freedom and peace, but she's afraid to leave her brothers and sisters to her father's wrath.

When her siblings are old enough, Kendra does manage to escape the horrors of her life as they are either on their own or relocated to live with grandparents, as is the case with the youngest, Naomi, whom they lovingly call "Nanny."

Kendra is ecstatic to be accepted into design school in Columbus, OH, and is relieved to depart her dysfunctional family. She no longer is forced to deal with her father or the boy from school named Nate Miller who humiliated her in front of her peers.

Columbus doesn't prove to be an easy getaway for Kendra, as she deals with her depression by getting hooked on drugs and alcohol. Lucky for her a school counselor takes pity on her after hearing her sad story and finds placement for her at a rehab facility where she regains her faith in the Lord and is able to get back on the right track.

Upon learning a good friend of hers has died, Kendra returns to Walnut Creek and to the friends she left. She buys a little cottage and starts her own design business vowing to never see her parents again. The hatred she feels for them has caused a huge scar in her heart, and she realizes she can only depend on herself.  Old friends welcome Kendra with open arms, and for once, she is at peace. Then Naomi appears at her door asking to live with her and no longer stay with her stuffy grandparents. Happy to have her beloved sister again, she wonders if she is doing the right thing by allowing her to stay. But she accepts her with open arms and enrolls Nanny in her junior year of high school.

Meanwhile, when Kendra bumps into her nemesis, Nate, she wants nothing to do with him, but how can she avoid him when his hardware store is two doors down from her shop? Nate is surprised by Kendra's cool treatment of him, and when she tells him why she dislikes him, he is instantly repentant.

Kendra now is 25 and Nate, a year older, is determined to make amends; while doing so he finds he is surprised that he is falling for her. She has no reason to trust him, but he manages to worm his way into her heart. But can she trust him? She's never been able to trust anyone before, why should she now—especially after he was cruel to her when they were kids? He reminds her he was a callous teenager and determines to show her he is a different person and one she can learn to believe in and maybe fall in love with one day.

As Kendra's business begins to thrive, she reflects her current situation:

"Pleased with all of her accomplishments, she decided it was time to relax for a bit, especially since a new library book was calling her name. After cutting a slice of bread and placing it neatly on a plate, she sat down, feeling a tranquility that eluded her childhood.

"Of course, she wasn't even sure if she longed for peace in those days. Mostly, she just tried to take care of her siblings, avoid her father, and keep everyone fed. More often than not, she'd failed at all three things. Her younger brothers and sisters would go to bed hungry, she'd be sporting a welt from whatever her father had decided to hit her with, and she'd be overwhelmed with schoolwork.

"No, back then, her sense of peace had come from being around her friends or in the pages of a book."

The prologue commences a decade prior when Kendra is in middle school and desperately wanting to be a part of the clique known as "The Eight." The group consists of Amish, Mennonite, and English teens. One of them, Andy Warner, is an Englischer who befriends Kendra. Due to Kendra's abusive home life, the family’s poverty, etc. she is tormented by Nate, and this is when she decides she will hate him for the rest of her life.

The story segues to Kendra's life ten years later and her return to her hometown. Each chapter unveils some fact of Kendra's life at age 15 and the time she spent with Andy. However, throughout the novel, it is not known what happened to him and how he passed. These clips are a bit baffling until one gets further into the plot and can understand how this information relates to Kendra’s current life. This is book 4 in the Walnut Creek Series; maybe it would be helpful to read the prior issues.

The Trustworthy One is an apt title for all that Kendra suffers during her early years. Because one is a blood relative, it does not mean they are able to love and nurture family members, and this concern spans all cultures and classes of people. This tale exposes the sad topic of child abuse and how some deal with it. Through her faith and with the help of her good friends, Kendra learns to rely on herself to gain trust and banish the pain from her past to move on to a fulfilling new life.