Trump's America: The Truth about Our Nation's Great Comeback 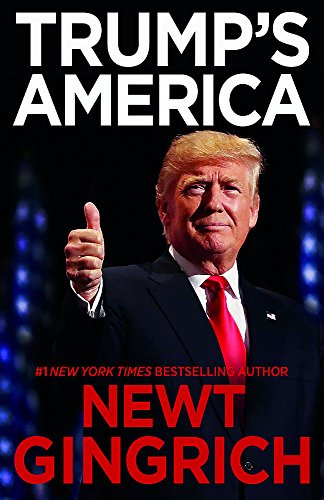 Former Speaker of the House Newt Gingrich is quite candid about his support for President Donald Trump. This fact will immediately turn off readers of a moderate, liberal, or progressive bent. Indeed, Trump’s America is one long polemic against the age of Barack Obama and a celebration of “Make America Great Again,” the slogan of Trumpism.

Trump’s America details all the ways in which Gingrich believes President Trump has already changed America for the better. He highlights the Trump administration’s elimination of federal regulations on small businesses, the Trump team’s support for infrastructure spending, Republican-backed efforts to dismantle “Obamacare,” and the passage of President Trump’s major tax cut in 2017. All of these efforts are held up and praised as returning the United States back to an older ideology of prosperity, unity, and independence.

The other major portion of Trump’s America features Gingrich’s proposals to serious problems facing our country. In Chapter Thirteen, Gingrich tackles the issue of America’s opioid epidemic. As he notes, Americans make up four percent of the world’s population, but America accounts for 27 percent of the world’s drug overdose deaths. Most of this can be blamed on the opioid epidemic that claimed more American lives in 2017 alone than did the entire Vietnam War. This is a serious issue, and Gingrich suggests that President Trump and his administration should fight this crisis by destigmatizing addiction and mental health, abandoning abstinence-only drug recovery programs, and using the private market and Medicaid to expand public access to opioid recovery drugs like methadone.

Gingrich similarly says in Chapter Fifteen that collaboration between the government and the private sector is needed in order for Americans to conquer space. Gingrich believes that the Department of Defense (DOD) should be encouraged to finance asteroid mining and the deployment of new satellites in order to counteract Russian and Chinese space colonization attempts. Also, as he says in Chapter Fourteen, renewed American involvement in space could help to open up new job opportunities for millions of Americans, many of whom would be graduates of the federal job training schools that Gingrich wants the Trump administration to support.

The other sections of Trump’s America are far more controversial. Here, Gingrich accuses the special counsel investigation of Robert Mueller as a hunt for evidence, not a search for criminal activity. Gingrich points out a majority of Mueller’s investigators have donated and/or represented Democratic politicians (this is objectively true), and that Mueller was only called in because of an irate and petty former FBI Director by the name of James Comey.

Gingrich also states with passion that President Trump and his supporters are not only locked in battle with a regulation-heavy federal bureaucracy, but they are at war with far-left professors and media elites who have a radically different vision of America and the world. Trump’s America is fighting back, Gingrich contends, and its enemies are legion.

Trump’s America will not convert anyone, and it is indeed preaching to the choir. At times, Gingrich skimps on historical analysis in favor of gross generalization about historical figures like Martin Luther King, Jr., Abraham Lincoln, and Franklin Roosevelt. However, this work of mass media political science should be read, for it highlights that, in the age of President Trump, American conservatives have finally come to understand what Carl Schmitt once called “the political.” Rather than see Democrats as an opposing team playing by the rules of the game, many Trump supporters have come to see their political enemies as their spiritual and existential enemies.

As Gingrich writes at the end of this book, “This struggle is profound and deeply felt. It is a countrywide cultural civil war . . . This is a time of winning or losing.” This may sound ominous to many, especially those who seek moderation and compromise, but this view, which echoes Schmitt’s contention that politics is war and conquest and will always shed blood, is fundamentally more realistic than any kumbaya lie we like to tell ourselves.