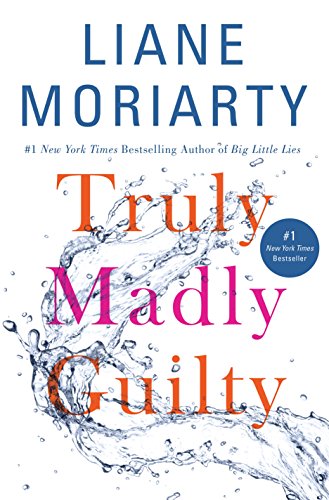 “a well-written story by an inventive writer.”

“She thought about secrets and the damage they did.”

Sam and Clementine are parents of two little girls. Their relationship is easy most of the time, if a little banal. They are invited to tea by Erika and Oliver, their uptight, driven friends with an agenda for the afternoon. That plan goes by the wayside when both couples are shanghaied into a barbecue in Vid and Tiffany’s swanky backyard.

Erika and Clementine’s lifelong friendship is fraught with tension, so Erika and Sam gravitate toward the slightly wild host couple. Alcohol and sexual tension flow freely, until catastrophe strikes and all three families find themselves in free fall.

Coming off the wild success of The Husband’s Secret, Moriarty faces a challenge in keeping her mystery loving readers satisfied, while broadening her reach to include readers of straight contemporary fiction. She approaches the task by creating fully fleshed characters with believable relationships. Even before Erika interacts with any other character, her inner monologue makes it plain what sort of woman she is: before two pages are turned she’s had snide thoughts about the cab company, her friend’s job, appearance, and speech, and even about her raffle ticket: “She couldn’t be bothered putting it in her bag and then having to find it when they drew the raffle. Blue, E 24. It didn’t have the look of a winning ticket.”

Clementine, when she in introduced in her turn, is nearly as unappetizing as a protagonist. “Wherever she went, whatever she did, part of her mind was always imagining a hypothetical life running parallel to her actual one,”—in this quote, Clementine is referring to the events of the fateful barbecue, but further reading reveals that dissatisfaction and self-involvement are her way of life. The other characters are not as thoroughly introduced as Erika and Clementine, but each has their own lesser backstory and character strengths and weaknesses.

Moriarty has chosen the increasingly common narrative structure of contrasting timelines. The action shifts back and forth from the day of the barbecue to real time, about 10 weeks after that evening. Much of the story is told from the perspectives of Erika and Clementine, but other characters have a chance to view the day and the relationships of the other couples through their unique perspectives.

Moriarty does a fine job of giving each character his or her own personality and voice—even without dialogue tags, it is never unclear who is speaking, which can be an issue with multiple narrators. She also succeeds wildly in her gradual revelations about each character, not only in their actions the day of the fateful barbecue, but also in the forces which shaped each of them before they knew one another. Tiffany and Vid, as the newest couple in Erika and Clementine’s lifelong dance of friendship/enmity, are the least developed couple, but even they have their quirks and fascinations—they are the most likable couple of the three.

By the end, Erika and Clementine have been changed by circumstance, it’s true. Moriarty’s real strength, though, is in not changing them beyond believability. They are still flawed people at the end, but in revealing their backgrounds Moriarty makes their less attractive traits understandable. Her trick of jumping back and for the between the past and the present peels back the layers of her characters gradually and enhances anticipation for their futures.

One unfortunate effect of the time shifting narrative and backstory layers, presumably meant to create a mystery to placate Moriarty’s fan base, is that the reveal of the actual events of the day falls somewhat flat when it finally occurs. That’s it? That’s what’s tearing three families apart? might be a common reader reaction.

The penultimate scene feels secondary to the laundry list of social issues from which each character arises: alcoholism, hoarding, socially engineered friendships, sex workers, kleptomania, overbearing parents, and lies, lies, lies. It would take a lot to overshadow all of these personal problems that exist before The Barbecue, and the eventual apex of the story doesn’t quite reach that height.

Even so, Truly Madly Guilty is an absorbing read. Liane Moriarty has a nice way with characterization and dialogue, and she’s taken great care to create layered characters whose personal growth is believable. Even such a slight character as the grumpy old neighbor is given a backstory that evokes sympathy without making him too good to be true. While this novel might not quite live up to the expectations of fans and the press, it is a well-written story by an inventive writer.