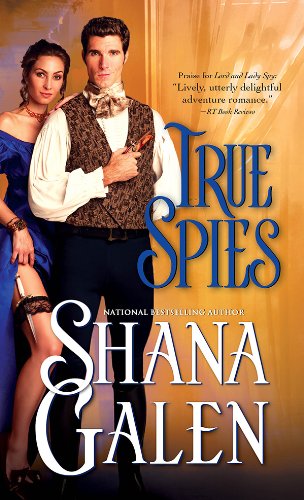 “True Spies is a treat of a novel.”

Winslow, Lord Keating, is a little detained in taking his wife to Lord and Lady Ramsgate’s ball . . . by several men wanting to kill him. Winn is a spy known as Baron and that’s a fact he’s hidden from Elinor for the 14 years of their marriage, as well as the reason he’s absent from home so much.

This time, however, his disappearance is the last straw. Elinor does an unheard-of thing: she goes to the ball on her own.

“She was done living as a hermit. Because her husband cared more for anything and everything . . . than he cared for his wife and family . . . Elinor almost wished Winn had a mistress. It would make him more interesting, more human.”

Defiantly, Elinor allows herself to be attracted to a man who professes to be a spy. Winn and fellow spy Blue soon put the fellow in his place but now Elinor is on their trail. As a genuine spy, her husband becomes very interesting indeed but that’s no reason for him to lie to her.

“Before she could even think what she was doing, she slapped him hard across the face . . . It had not hurt him, not literally, but it had hurt his pride . . . he’d always thought if she learned his secret, she’d be proud and pleased . . . Clearly, he’d been deceiving himself.”

Elinor now has second thoughts. Now she’s decided she wants to be a spy, too. A little late, Winn tries to exercise his husbandly prerogative of putting his foot down. “For once, his personal life would take precedence.” He’s suddenly seeing Elinor in a new light—and he’s not altogether certain how he feels about that.

“The shot of lust he felt when he saw her all but knocked him over. And before he had a chance to feel guilty for lusting after a woman who was not his wife, he realized it was indeed his wife, and quickly anger replaced lust.”

Too late. His superior agrees with Elinor. His people are in short supply right now, what with his other female spy suddenly finding herself in the family way and her husband wanting to hang around for the birth. Napoleon may be imprisoned and the world appears at peace but it isn’t. The Prince Regent is threatened with assassination. His only other married pair now find themselves in some pretty tight spots and the escapes are just as hairbreadth. Sometimes Winn actually has to depend on his wife for assistance, and Elinor doesn’t let him forget it, either.

“All you’ve managed to do is get yourself captured, beaten within an inch of your life, and rendered unconscious for the last six hours or so.”

“Oh, don’t worry about the inches of my life,” he said through clenched teeth. “I have a few left.”

Spousal bickering continues, but somehow, in spite of Elinor or perhaps because of her, Winn saves the day as well as the Prince Regent and the British Empire. In the midst of it all, he realizes a few truths:

“ His perfectly forgettable wife had become . . . unforgettable . . . In the last few days he could not seem not to think of her.”

When all’s said and done, however, he’s only sure of one thing:

“He was either extremely dedicated to his work, a complete idiot, or madly in love. Probably all three.”

Any Regency story is fun, and one with spies and spouses at odds and mistaken identities is guaranteed to be moreso. This novel is typical of the genre in its flippant tone providing more than a chuckle or three.

It’s a spy caper for certain, but it’s also a romantic romp between two people who didn’t start out loving each other and only realize they do when danger closes in on all sides.

True Spies is a treat of a novel.