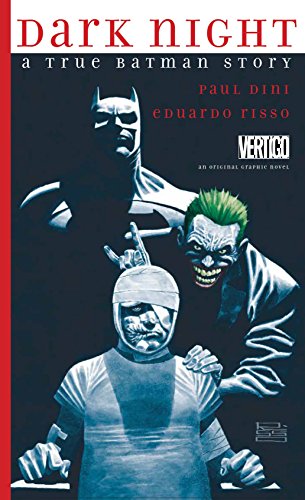 At least as frustrating as a bad book—which, after all, can be tossed aside and forgotten—is a good book that could have been even better. You want it to be more than it is because you see how it might have been. Dark Night: A True Batman Story, a graphic novel written by Paul Dini, with art by Eduardo Risso, is just such a book.

But before we discuss its problems, we must acknowledge that Dark Night is the well-told story of Paul Dini being violently mugged, as well as the story of that mugging’s lingering aftereffects. The sections that deal directly with Dini’s history—his childhood, his work on Batman: The Animated Series, his flirtations with both self-harm and alcoholism—are generally effective, filled with humor, pathos, and a rare amount of self-awareness.

Additionally, Batman, Joker, Scarecrow, Penguin, Two-Face, and even Harley Quinn, among others, are made wonderful use of, operating not so much as a Greek chorus, but as various facets of Dini’s personality, speaking to him throughout the action like the proverbial angel and devil on the shoulder, personifications of his best and worst thoughts and feelings.

Eduardo Risso’s art is beautiful, helping to create the mood(s) of the piece while also being playful and clever, changing style and tone as the story itself shifts from childhood to dating anecdote to violent encounter. The color work is also fantastic.

The problem with Dark Night is the framing device used to tell the story. Rather than being immersed in the traumatic, dramatic events depicted in the book, we are guided through them by present-day Dini, who appears on page two, and intermittently throughout, telling us the story of his own past and offering the perspective of hindsight. This creates distance between the reader and the focus of the graphic novel, and makes the book feel a bit like an essay.

As a reader, you want to be inside the story, to be in Paul Dini’s head as he is mugged, to feel what he’s going through in that moment. But the always-present teller of the tale makes that impossible; he is always standing between you and the events of the story, telling you what he thinks about the things happening behind him while blocking your view of them.

It’s the difference between seeing a fistfight and hearing someone tell you about the fistfight that he or she saw. The former affects you—you see the fear in the eyes, hear the tremor in the voice, sense the hesitation before it begins, and when the violence erupts there’s nothing else in the world—while the latter is just something you heard about.

Which isn’t to say that Dini didn’t have at least one good and practical reason for writing the story in this way. Dark Night jumps between time periods, and folds back on itself, and in order to tell seemingly—and only seemingly—disjointed vignettes in this way, you need some sort of glue to hold the pieces together. Present day Dini contextualizing everything is that glue.

But even acknowledging that, you can’t help but wonder about the book this might have been had Dini found a way to tell this story without putting himself between the reader and the events being depicted, had he found a way to make you feel each of the moments rather than merely understand them. Because, in the end, Dark Night is the story of a man finding redemption in life and in art after nearly giving up on himself, and that is wonderful material to be working with.