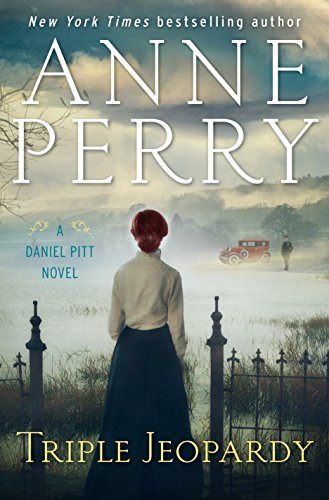 Last year Anne Perry introduced her third crime fiction series set in England, and Triple Jeopardy is its second title, set in 1910. The book features Daniel Pitt, the son of investigators Charlotte and Thomas Pitt from one of her earlier series. Acting as what Americans would call a defense attorney, Daniel’s caught up in an international scandal that involves his sister Jemima and her husband Patrick.

One of Jemima’s friends from her years in America suffered an attempted sexual assault there and the theft of a personally important necklace. The blame falls on British diplomat Philip Sidney and migrates with all of the group to England. Daniel’s original plan, to yield to his sister’s wishes and defend Sidney only far enough to force revelation of the assault, goes out the window when one of the witnesses is murdered and an underlayer of profit and loss begins to be revealed.

Soon Daniel is compelled to seek direction from his direct superior, the estimable Mr. Kitteridge:

“‘The murder must be part of the whole business, but if Thorwood framed Sidney, and he’s innocent of the assault and the embezzlement, how does the murder of Morley Cross fit in with that?’

‘God, you’ve got a devious mind, and you want to understand everyone!’ Kitteridge said, but it was awe he expressed, not denial. ‘I see why you’re going all shades of pale,’ he went on. ‘What is Patrick Flannery’s part in this? … Could Morley Cross have attacked Rebecca?’ Kitteridge said with disbelief. ‘Then he set up Sidney with the embezzlement change?’

‘I hadn’t even thought of that,’ Daniel admitted, a wave of nausea coming over him.”

Perry’s adroit handling of matters of law and crime creates an intriguing skein of tangled motives and court case potential in this fast-paced and likeable novel. In addition, she spikes the action with a slowly growing attraction and daring whiff of romance between Pitt and his other boss’s brilliant daughter, forensic expert Miriam fforde Croft. When Pitt and fforde Croft follow a hint of evidence out to the Channel Islands, the entire set of available motives shifts in a heartbeat. All Daniel Pitt will have to do is maneuver the progress of the legal case to force the unlikely admission of the crimes involved.

“The judge looked exasperated. ‘Mr. Pitt, my patience is not endless, and you have tried it further than most. I hope you know what you are doing?’

‘Yes, sir,’ Daniel replied. He hoped more than anyone else that, indeed, he did. They all seemed to be here. His parents, Patrick and Jemima, Miriam, all those he cared about. This was going to be a triumph . . . or a disaster. He could feel his heart beating, as if it were trying to break out of his chest.”

Anne Perry’s long career has labeled her as an “English author of historical detective fiction.” But Triple Jeopardy shows emphatically that Perry’s best writing exhumes the motives of the human heart. This is, in the long run, the finest characteristic of well-written fiction, and sets readers looking for more from this promising new series.