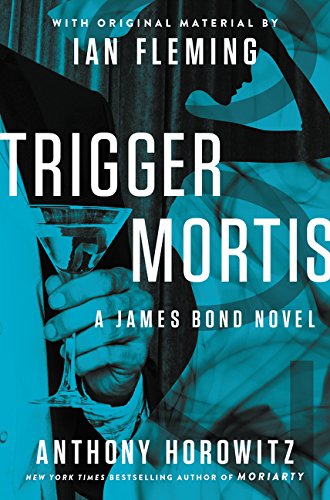 With publishers and estates loath to say goodbye to lucrative brands, the death of the author is no longer the end of a string of bestsellers. It’s now commonplace to find a new, albeit highly regarded author’s name on the cover of the latest outing of an old favourite, and Ian Fleming’s iconic spy James Bond is no exception.

Billed as containing “original material by Ian Fleming” and with a writer as accomplished at “period” as Horowitz, fans of boyz own adventure stuff are in for a real 007 treat with Trigger Mortis, the latest addition to the Bond stable. But you can forget the whizz-bang techy treats; Horowitz’s Bond is back in his 1950s roots.

The story is set in the Cold War and of course, the Russians are at it again. The trail begins when Bond is dispatched to protect the life of Britain’s top motor-racing driver who, it seems, is being targeted by those pesky Russians. We wont go too deeply into this low-stakes area of the plot as it seems this material was incorporated from an original TV treatment written by Ian Fleming.

By coincidence Bond stumbles on a curious alliance between the Russians and Jason Sin, a wealthy Korean with a penchant for a deadly game of cards. The death of a German rocket scientist working on the US space program sets the reader’s mind ticking and before you can say Jeopardy Lane (the name of Bond’s archetypal bumbling femme fatale) we are up and running with a thriller centred on those heady days of the race into space. This aspect of the story lends a very nice sense of retrospective wisdom as we all understand the significance today of satellites in our day-to-day lives.

Horowitz has turned his hand deftly to combining old and new material, and took quite a risk reprising Pussy Galore from Goldfinger fame. For Bond fans there is plenty to be excited about with this read, but it is surprising how dated Bond’s attitude towards women feels. No doubt in their own minds, many men do view a woman as Bond does— by the curve of her figure, or the fullness of her lips—but while it can work on the screen it’s harder to pull off on the page.