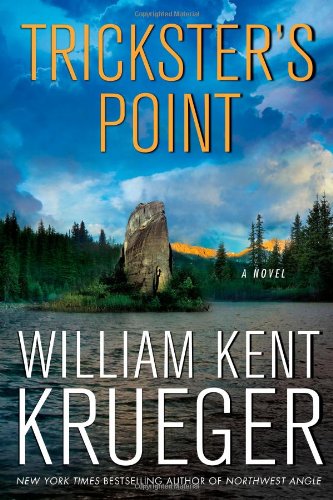 William Kent Krueger’s Cork Corcoran novels can be described as “dark,” in that they are somber in tone and delve deeply into the ugly side of human nature and harshness of life. Mr. Krueger keeps his stories from being depressing, however, by balancing dark with light.

Throughout the twelve books in this series, Mr. Krueger’s characters are cowardly and brave, good and evil, aggressive and passive, law-abiding and criminal. Such black-and-whiteness combines into shades of gray, with which the author also paints his setting: the Boundary Waters of northern Minnesota, where “low clouds seemed to breathe gray into the water” and “The wind was out of the west, carrying snow like ash from a distant fire.”

In Trickster’s Point, Mr. Krueger continues to explore another gray area—the cultural mix of white and Native American. Cork himself is part Irish, part Ojibwe, and he walks pathways in both cultures while juggling a position between law enforcement (he’s a former sheriff) and private citizenship.

This often leaves him on his own in resolving conflicts between opposing interests who speak different languages and hold different values. In this volume of the series, he’s caught in the knot of many tangled threads and becomes prime suspect in the murder of his childhood friend—the first Native American governor-elect—who gets shot through the heart with Cork’s own deer-hunting arrow.

Mr. Krueger tells this story through alternating scenes of past and present, showing how old experiences and youthful friendships ripen—or rot—into redemption or tragedy. Readers following the series learn much about Cork’s childhood that explains why “Corcoran O’Connor attracted death the way dogs attracted fleas.”

Indeed, the book’s theme is how a man’s actions arise from who he really is. Cork’s son nails it by saying, “That’s what Mom told me once. She said trouble’s like this wind that blows and blows and there have to be windbreaks to keep it from sweeping everything away. She told me you’re one of the windbreaks. It didn’t make her happy, but it’s who you are.”

It doesn’t make Cork happy, either, but in this book he comes to terms with it more thoroughly than in the past, and pursues the murderer with greater confidence and resolve than in previous volumes. As in those stories, he finds yet another gray zone, that very murky place between justice and law where homicide sometimes is the only solution.

Cork’s mentor and spiritual adviser, the Ojibwe healer Henry Meloux, explains “. . . that there were spiritual bonds connecting certain people, that they were two sides of the same leaf, two halves of a broken stone, and that it was not about love, as most people thought of that word, but about a wholeness that was there when the two parts came together.”

These insights lead Cork to who killed whom and why on the remote rocky prominence called Trickster’s Point. The personal issues he wades through along the way involve traditionally masculine concerns about sons and fathers and manhood and heritage, in a tough, man’s world where women represent beauty and solace, home and family.

This is not to say that Mr. Krueger’s women are helplessly feminine. His Minnesota North Country is an equal opportunity environment in which most women can do anything a man can do, often better; in fact, the sheriff who replaced Cork is a woman, and she does the job just fine. Nevertheless, the story is told from a male perspective that while rich in love is neither soft nor romantic.

Just another gray area the author explores. He’s particularly adept on presenting the intersections between white man’s and red man’s realities. Cork learns, for example: “To kill a deer . . . was a shockingly intimate experience, and after he’d brought down his first buck, he understood why it was necessary for his own spirit that he sing to the spirit of the animal he’d killed, that he explain the violence and promise the beautiful creature that his body would feed The People, and they would be grateful.”

Through Cork’s perception, Mr. Krueger allows readers to understand different worlds and how their rules arise and apply. His stories in general, and Trickster’s Point in particular, make these genre mysteries literary in quality by showing how one man’s experience reflects a larger whole.