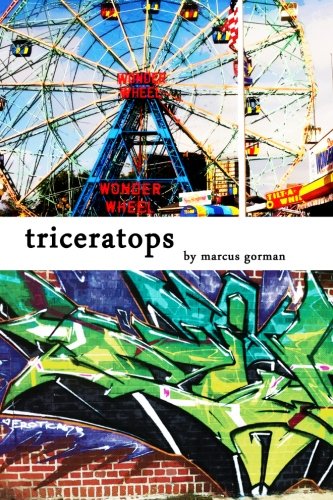 “An exploratory exercise into understanding the human condition, Triceratops is an introspective, thought-provoking, debut.”

Charlotte, a 27-year-old Seattle transplant living in New York City squats in a condemned building with Xavier, a tortured artist. Theirs is a mostly nonverbal existence that stops just short of a real relationship. As she listens to a random soundtrack Xavier made for her—seemingly for this very moment—she watches him violently slathering paint onto a canvas with both hands.

Just as the guitars streaming out of her earbuds hit their crescendo, Xavier stops painting with a satisfied look. Surprised at his impossible complacency, her unspoken questions are quickly answered when Xavier reveals a gun and proceeds to blow his brains out onto the canvas.

Across town, Henry, a resident of Seattle and visitor to New York City, is interviewing a young jazz quintet under the guise of writing a book when in reality he’s just looking for a bit of social interaction. Henry seemingly hits it off with Sophia, the trumpet player, who takes him out for a night on the town.

After a rather unnerving tromp through the city’s underground, Sophia jumps in a cab and is whisked away just as dawn breaks, leaving Henry to watch helplessly as the cab disappears into the distance. Considering the odd events of the past few hours it somehow doesn’t surprise him when he hears his name. As he turns, Henry sees Charlotte, and the memories of the single, calamitous night they spent together in Seattle come flooding back—the cherry on top of his already bizarre night.

Charlotte, her life reduced to a duffel bag and a brain-splattered canvas, sees Henry as a reminder of a life she’d rather forget, though at the moment she has few options. Reluctantly, the duo embarks on an alcohol-assisted, emotionally perilous journey filled with strange acquaintances and good music.

As past and present collide, Charlotte tries to avoid dealing with the circumstances of their previous interaction as she and Henry assess their tumultuous present that will lead them into an unknown future.

Marcus Gorman writes with solid self-assurance and clarity. The well-constructed plot unfurls with consistently paced action that provokes strong imagery and is infused with a tone and voice perfectly reflecting an uncanny authorly ability to create the oddest of situations.

Excellent story execution aside, the rendering and evolution of the characters are one of the areas where Gorman truly shines. Each one has a perfectly defined point and purpose that not only distinguishes them from one another, but also contributes an important function and cohesiveness to the story as a whole.

Charlotte is defined—or perhaps defines herself—by a dark and mysterious past. Though she has good intentions, she is rather directionless, and as each day melds into the next Charlotte fights to give them meaning, but eventually her past catches up with her.

Her polar opposite, Henry is a hopeless romantic. A knight in shining armor always poised to save the damsel in distress—whether she wants to be saved or not— Henry is also trying to make sense of his life, a searching openness contributing to his always finding himself in rather compromising and strange situations. Maybe if he could make sense of Charlotte that would help him understand himself.

Mr. Gorman’s depth and understanding of true life circumstances carefully balances the harsh realities and heavy situations his characters experience. Writing with heartfelt emotion and wit, he uses just the right amount of humor to diffuse serious situations—not as a way of hiding behind them or in an attempt to make the more visceral aspects more palatable, but rather to give them context and dimension.

In the book, Gorman uses a triceratops as a euphemism for something larger than life and so utterly incomprehensible that it holds you completely fascinated by its scope and magnitude—an unexpected yet perfect comparitive for unexpected and random evolution and experiences in a life.

Marcus Gorman beautifully executes a well conceived, darkly humorous look at twentysomethings about to enter their third decade who are just trying to find out where they fit in the world.

An exploratory exercise into understanding the human condition, Triceratops is an introspective, thought-provoking, debut.