Treyf: My Life as an Unorthodox Outlaw 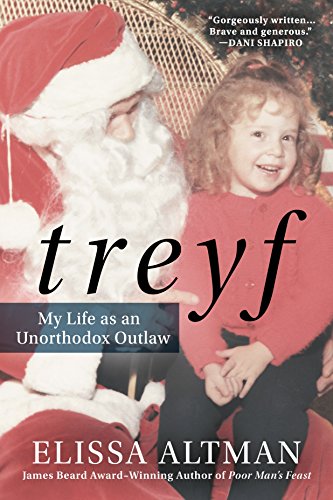 For anyone not familiar with the term, this book’s title will make little sense until a definition of treyf has been supplied. Treyf is a word used in Judaism to refer to a food that is not kosher and therefore prohibited. But author Elissa Altman shares an alternate definition commonly used in her family: “imperfect, intolerable, offensive, undesirable, unclean, improper, filthy, broken, forbidden, illicit, rule breaking.” She notes: “A person can eat treyf; a person can be treyf.”

Treyf is the story of Altman’s quest for an authentic personal identity* amidst numerous conflicting familial expectations regarding food, religious observance, and even sexuality. Some in her family observe Jewish law more strictly than others. Some keep kosher, others don’t.

Altman’s rendition is most engaging as her openness and confidential tone quickly draw the reader into her world where her early family life is always bordering on the edge of treyf. The only criticism is that the reader may occasionally lose his grip because Altman’s accounts have a tendency to flit back and forth without warning from one time frame to another.

Altman’s is a stormy and perplexing world. Her father was brought up in a violent home. Her mother was a depressed and food-obsessed fur model who had gotten married mainly out of the need to get out of her parents’ house.

The lifestyle of Altman’s Jewish but mostly nonobservant parents conflicts with the traditions followed by the more observant extended family. But even within the extended family, various people choose which Jewish customs to follow and which to ignore. The rules tend to flex and flow with the situation. Some will eat this, but not that. Some will keep kosher in one place, but not in others, and the way each person interprets the rules seems to vary over time.

As an uncommonly perceptive and introspective child, the young Altman winds up in the middle of many of these conflicts, which haunt her and serve as the source of her identity confusion. Is she a Jewish girl or not? To what extent will she adopt the practices and food restrictions of her heritage? Always present is the fear of eating treyf, or of actually being treyf. Being thrown out of Hebrew school after just one day did not help her to know who she is.

Altman’s colorful and dearly beloved grandmother, Gaga, plays a significant role. Forced into marriage at age 34 by family expectations, Gaga reportedly had consented to a single act of sex on her wedding night, and that is how Altman’s mother came to be born. But eventually her spurned husband was relegated to the attentions of a Catholic nun—of all things—while Gaga covertly took on a long-term gay lover.

Altman’s story includes hints about her own sexuality from a very early age. Disgusted with her ballerina outfit at age three, she quips, “I wanted to be Ken, not Barbie.” In her first and only Hebrew school class, the teacher Miss Kranowitz “put her hand on my shoulder, [and] I thought I’d pass out.” As middle school friends are discussing early sexual forays, Altman shares her personal reaction: “I achingly lust after something I can’t name; I know, instinctively, that it needs to be hidden.”

The summer working at the Sugar Maples Hotel in the Catskills among gentiles is transformative. Eventually the various life factors that contribute to Altman’s individuation become clear. Included are Gaga’s passing, and Altman’s passionate foray into cooking, despite her mother’s and her Aunt Sylvia’s disdain for this task. “Cooking became my religion, the key to my sacred, the path to sanctity and peace.” Also involved is her realization that her connection to her family will end with her father’s passing.

Altman finally finds herself when she becomes brave enough to venture outside the safety of family and religious expectations. After a long struggle and in a different part of the country, she finds an authentic identity defiantly filled with trayf food and what her family would consider a trayf lifestyle to boot.

“I am the real modern American, the who transcended my family’s genetic code of violence and disappointment, who broke every Talmudic law presented to us as though it was our job. . . . Belonging everywhere, I now belong nowhere. . . . I am safe—finally safe—even as I yearn for . . . all who came before me.”

In addition to its obvious human-interest value, this story is even more useful as an example of one person’s struggle to mature as an individual. To become thoroughly adult, a person must first step outside of the religious beliefs, cultural mores, and lifestyle expectations—even food restrictions—her tribe would impose on her, and critically analyze them for validity in her own life. Only once she has figured out who she is as an individual can a person begin to assess how those cultural beliefs and expectations fit in. Only then can she responsibly choose which ones to adopt and which to reject.

Unfortunately much of our conventional culture tries to make things work the other way around—tries to force the individual into the mold of various familial, religious, and cultural expectations. Some people engage more actively than others in the process of maturing as an individual; some reach wholeness more fully than others. The work of assimilating findings from this journey into an integral whole may be the task of a lifetime.

Altman was hurled into this struggle very early in life; her journey was one filled with more roadblocks than most. But Treyf, one person’s articulation of the process, is a gift to any who may still have this necessary maturation task before them.

* Treyf’s original subtitle was My Quest for Identity in a Forbidden World.