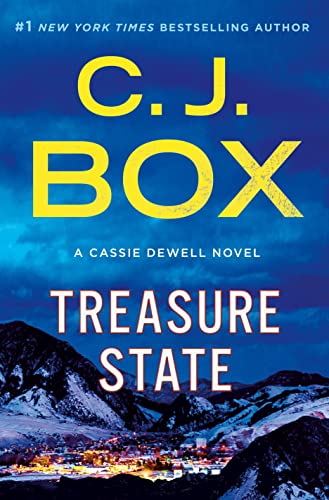 “Treasure State is an action-packed page turner, with enough peeks into the minds of the local villains that the threat level to Cassie Dewell rises swiftly. Box, a Wyoming author, clearly enjoys setting up his neighboring state in an irresistible treasure hunt.”

The sixth Cassie Dewell investigation from C. J. Box opens with a double death: first a porcupine crushed on the Montana highway, and then a blunt statement that Florida PI J. D. Spengler, making amazing headway on investigating a serial scam artist, is never going to leave the town of Anaconda alive.

Spengler’s not yet known to Cassie, however, who’s just wrapped up a neat little insurance job (guaranteed pay), missed catching a prowler in her office, and taken home with her the file for a case she’s working with high cash payments and no name for the man who’d hired her: the Sir Scott’s Treasure case.

Box’s plot in this crime novel of endless clever and often amusing twists riffs off one of Montana’s nicknames: not Big Sky Country, but the Treasure State, for all its deposits of gold, silver, copper, even sapphires. Cassie’s well aware of the hunt going on, based on a poem hinting at a major hidden treasure—an anonymous poem that appeared overnight in a noted steakhouse. Has the poet really hidden a fortune for the cleverest clue-solver to find? If he’s really the anonymous client who phoned her, then yes, maybe he has. “I want it to be found legitimately,” he tells her—not through snooping into the author (and hider) himself.

But treasure hunts, especially the real ones, generate greed and often death. While bodies pile up on the very public exploration, another call to Cassie’s office suggests a parallel private hunt. The woman who hired the Florida PI needs Cassie to track him down, since he’s vanished after heading into Anaconda.

“It’s a real place,” Cassie said. “It’s off the beaten path but I’ve been by there many times. It’s a little less than two hours away from me.”

Now this middle-aged PI mentally views her own memories of the famous mining and smelting region, and Box’s signature darkness pokes up through this otherwise easygoing mystery: “Anaconda’s colorful and tragic history. . . . Anaconda’s past was filled with labor strife, copper mining tragedies, federal occupation, and violence.” And as for the woman who’s hiring Cassie, she’s blunt about why she’s trying to track down not just her vanished PI, but the scam artist he'd been chasing and the seven million dollars he’d conned out of Candyce Fly:

“‘I want revenge,’ Fly said. ‘I want him to be humiliated like he humiliated me. If I can get my money back, all the better. But most of all, I want him brought down so he can’t do this to another woman in the future.’ Cassie doubted her sincerity on the last one, but it sounded good and she withheld comment.”

Treasure State is an action-packed page turner, with enough peeks into the minds of the local villains that the threat level to Cassie Dewell rises swiftly. Box, a Wyoming author, clearly enjoys setting up his neighboring state in a plot that threads together its mining history, its modern-day industrial power and crime, and an irresistible treasure hunt. When the cases all come clear at last, a highly satisfying conclusion wraps up this rattling good read.