Trailblazer: A Pioneering Journalist's Fight to Make the Media Look More Like America 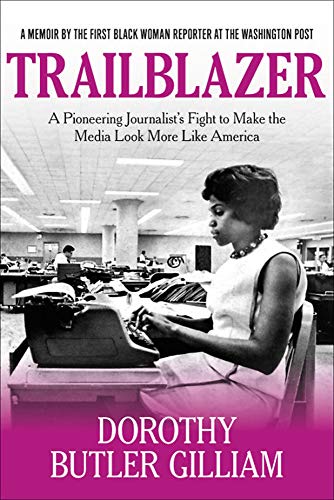 “In brisk, vigorous, precise prose honed over decades of daily newspaper work, Gilliam paints a vivid portrait of the obstacles she faced as a black woman breaking multiple barriers in the Washington Post’s white- and male-dominated newsroom, and her persistent efforts to reshape that workplace and its perspective on a black community whose existence it barely recognized.”

In her landmark 2018 work A More Beautiful and Terrible History, historian Jeanne Theoharis challenges a host of popular and prevalent misrepresentations and misappropriations of the civil rights and black freedom movements of the 1950s and ’60s. She even takes issue with Hank Klibanoff and Gene Roberts’ Pulitzer Prize-winning The Race Beat (2006) for celebrating the daring coverage of the southern civil rights struggle by white-owned major newspapers which, at the same time, blithely ignored parallel movements in their own cities.

After downplaying years of organized and persistent protest by African Americans outside the deep South, and dogged and prolonged efforts to effect change through the system, these news outlets, so attentive to the southern struggle, feigned shock when their cities exploded in racial violence in the mid- and late-1960s. In doing so, Theoharis argues, they contributed to the widespread misconception that southern Negroes met real race problems with disciplined and measured responses, while urban blacks raged and rioted for no good reason.

As a city newspaper aspiring to international stature, Gilliam contends that, at the time she arrived in 1961, the Post was failing on both counts. Still no match for the New York Times on the international political reporting stage, the Post also fell far short of adequately representing the majority-black “chocolate city” of Washington, DC. When it covered African American life at all, it treated blacks (as the Kerner Commission on Civil Disorders would find in 1968) as if they “were not part of the audience.”

Not only did the Post pay insufficient attention to the political aims and actions of its African-American citizens, it also barely acknowledged their existence. As a de facto matter of unspoken editorial policy, the Post ignored black DC residents’ daily lives, concerns, and cultural activities.

Fighting an uphill battle in a city that didn’t even have its own mayor, Gilliam devoted her professional life to transforming the Post into a newspaper whose coverage better mirrored its community. She also worked to bring more black reporters to the Post so it looked more like the city it ostensibly served.

The Post newsroom that greeted Gilliam in 1961 had three black reporters, none of them women. The paper literally treated the black majority in Washington as if their lives didn’t matter. It had a strict policy of not reporting on murders of black people, which one Post city editor, John Riseling, dismissed as “cheap deaths.”

Recognizing how little influence she wielded at the paper at the time, Gilliam writes, “This made me so angry I wanted to lash out, but I didn’t. Controlling my temper, I made a mental note that I would someday find a way to fight against such arrogance, ignorance and white supremacy. And later as editor and columnist, I did.”

In brisk, vigorous, precise prose honed over decades of daily newspaper work, Gilliam paints a vivid portrait of the obstacles she faced as a black woman breaking multiple barriers in a white- and male-dominated newsroom, and her persistent efforts to reshape that workplace and its perspective on a black community whose existence it barely recognized.

She recounts coming of age “Up South” in Jim Crow Kentucky. She also dramatically recreates her early experiences reporting on the violent resistance to black students attempting to integrate Little Rock Central High School in 1957 and the University of Mississippi in 1962.

But by and large, Trailblazer is more about Gilliam’s struggle to reform the Post’s mission and transform its work environment than an “I was there” account of the high points of the civil rights struggle. In this way it differs from Simeon Booker’s Shocking the Conscience, with its first-hand reporter’s view of the murder trial of Emmett Till’s killers, Little Rock, and the Freedom Rides. (Booker himself makes a cameo in Trailblazer when Gilliam recalls her early two-year stint at Jet, describing him as “welcoming, lively, and peripatetic.”)

Gilliam’s story also differs from Booker’s in that she spent most of her career working for a white-owned paper, while Booker plied his trade primarily at the African American magazines Jet and Ebony. She notes that Booker did work briefly as a Post reporter in the early ’50s, but found facing the challenges of a white newsroom in a segregated city “overwhelming.”

Gilliam’s remarkable efforts to reform and remake the Post, and to become the sort of black, female role model she lacked is the heart of her story.

“My dream was to work for a daily newspaper,” she writes, “and I took seriously Dr. King’s urgings to young people to enter corporate America and make a difference. For the nearly 100 years since emancipation, blacks had been so systematically and cruelly shut out from white corporations, that it took Dr. King’s soul stirring messaging to spark my faith that a career in daily newspapers was even remotely possible for a Negro woman.”

Achieving that goal wasn’t easy, especially at first, when a black woman in her professional role was all but unimaginable to most people she encountered. When working out in the field for the Post, Gilliam had difficulty convincing people she was a reporter—even after showing her credentials—and was often dismissed with a disdainful “the maid’s entrance is around back.” Even white women reporters at the Post likened the newsroom experience to “volunteer slavery.”

Gilliam acknowledges that the “bondage”-like atmosphere of her early years at the Post sent her into frequent bouts of undiagnosed depression. Like her failed marriage, she touches on these personal difficulties sparingly and gingerly in Trailblazer.

By contrast, Gilliam pulls no punches when challenging the racism and sexism in the Post’s newsroom and the myopia of its editorial coverage. She also focuses more on her own personal growth from a “go slow” approach to integration and the “mis-education” of her generation as upwardly mobile young black professionals trained to mimic white society.

One of the book’s most fascinating episodes occurs when Gilliam, relatively well established after seven years as a Style section editor, petitions Ben Bradlee to make her editor of the Post’s Sunday magazine section and let her reshape it with more substantial coverage of life in the city. Bradlee receives her warmly, but insists that the paper’s publisher wants to maintain the section’s lightweight tone to cater to readers “who moved their lips when they read.” Gilliam recalls, “I didn’t comment on that statement but silently reflected on the fact that such attitudes of superiority were why so many black Washingtonians still thought of the Post as a white newspaper in a black city.”

The meeting does eventually lead to Gilliam becoming a columnist at the Post, a role in which she found herself empowered to cover black life in the city as she saw fit. Being a columnist gave Gilliam the chance to fulfill the role she envisioned for herself while still in journalism school: “I thought my work for mainstream media, shining light on the history, culture and activities of blacks, could help open-minded white people begin to know and understand African-Americans and replace some of their fears with facts.”

Trailblazer continues that essential work, at a time when a press that’s accurate, accountable, and responsive to the readers it serves—rather than the anti-journalist powers that would attack, restrain, or co-opt it—is more vital than ever.