Trading Manny: How a Father and Son Learned to Love Baseball Again 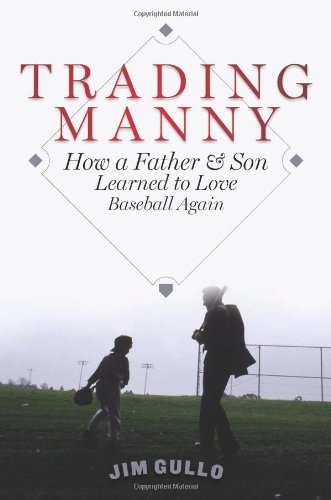 “Trading Manny is, of course, about the heartbreak two fans feel when their love for baseball is betrayed. But its more fiercely compelling story is about young Joe whose nascent ideas about heroes gets a distinct refining—and about his father who learns more from his son than he thought possible.”

Joe Gullo was just seven years old when he unwittingly set himself and his father upon a two-year journey—an adventure not so much of thrills and close calls but of learning—to get a solid answer to a straightforward question: If major leaguers took steroids then isn’t that cheating? And shouldn’t they be punished?

Author (and Joe’s father) Jim Gullo had his work cut out for him. As a dyed-in-the-wool fan of baseball he sorely wanted to wish the question away, but because his son was developing his own passion for the game he sought answers . . . and they wouldn’t come easily.

Trading Manny: How a Father & Son Learned to Love Baseball Again is the story about that long trek that began with the withering truth of a child’s observation.

Jim Gullo doesn’t set us up for another book-length rant about the travesties of drugs in America’s pastime. The road he takes unavoidably leads him to deeply consider his own perspective on the game and the issue, but the torch he bears the entire way is for his son, and ultimately, an almost desperate effort to soothe the betrayal that baseball committed against all its fans, young and old.

Father and son are the poignant thread that so compellingly pulls this story together. Any dad who’s a fan of baseball can’t help, as an adult, to at least give serious thought to the steroid issue; but how does a father answer such a question when he knows the answer is more complex in the grown-up world of professional sports—especially when you know the child is fundamentally right?

It’s not as easy as saying they did something stupid; Jim Gullo knew that, and so did his son. But he wanted to be able to get behind the reasons why these otherwise gifted athletes did something so obviously unfair.

But again, how to do it without crushing a boy’s admiration for the players he pins to his wall?

Most of us grew up in environments that allowed us a measure of comfort or inspiration from those we admired. It’s a pretty good bet we had posters and pictures of favorite bands, movie stars, or athletes (remember the Farrah Fawcett poster?) hanging upon our walls or pinned to the ceiling.

That connection, especially at a young age, is powerful. As we mature we accept the toppling of our idols, even expect it. But when we’re kids it stings because we can’t get our heads around the big “Why?”

This very moment is epitomized in Trading Manny in a poignant sentence evoking the sum total of our feelings when disappointed by those we once looked up to: “the Manny poster, once removed from Joe’s bedroom wall, wasn’t packed and didn’t make the move with us.”

These “heroes” lied, and for most of us when we got busted lying retribution was swift—but not so with Major League Baseball. Jim Gullo wasn’t satisfied to try and make his son understand the concepts of lip service and scales of economy, and his dogged pursuit for answers—for both he and his son—is what really makes the humanity of this story pulse with life.

The author makes no secret of his feelings regarding the use of PED’s at any level of athletic play—no eggshells survived this walk. He is only too happy to point out those named as violators, but is equally careful to toe the line and satisfy the legal eagles by pointing out “alleged abuses” when appropriate.

A fan can read numerous articles in sports and online magazines and blogs concerning the whole PED circus as it played out. But Mr. Gullo, despite his own growing misgivings about the game and its tainted nature, takes the higher road and uses his journalistic background to begin teasing out answers where he can instead of raging against the establishment.

He deftly accomplishes this task by attacking through the back door; baseball doesn’t expect (or perhaps even care) that its fans will give much passing thought to the scandal, but the author makes certain that Trading Manny asserts itself and makes major league baseball accountable to its entire fan base, to the extent it can be held so.

Entrenched fans of the game looking for telltale stats to bolster arguments will be dismayed by the overt circumvention of sabermetrics. The seven-year-old Joe is fond of tracking players via his baseball card collection, but the stats are largely ignored in favor of the infamous results.

Was an opportunity squandered to make examples of questionable players? Not at all. We Americans love the quick fix, we thrive on immediacy and convenience, but issues like those in Trading Manny don’t lend themselves to our more consumerist natures.

The more important life lessons, those which profoundly matter, take far more time than our gnat-like attention spans desire them to—and yet if we make allowances for these spans of time, as father and son did here, the results are well beyond what we could have possibly foreseen when we first stood at home plate.

On the upper deck concourse of Chase Field once hung a large picture, captured in the lower half of which were the silhouettes of a father and son standing and cheering, with the wide, awe-inducing expanse of the ball field before them. In the lower right corner were short lines of text:

Trading Manny is, of course, about the heartbreak two fans feel when their love for baseball is betrayed. But its more fiercely compelling story is about young Joe whose nascent ideas about heroes gets a distinct refining—and about his father who learns more from his son than he thought possible.