This Town Sleeps: A Novel 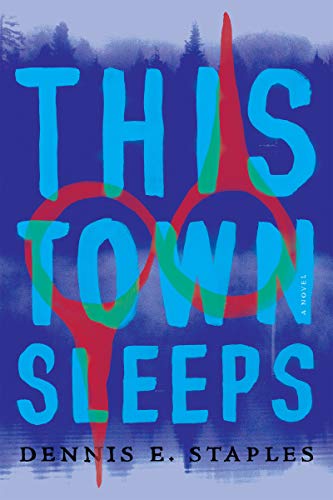 “This Town Sleeps is genuinely enjoyable. It has threads of mystery and romance. It combines humor and horror. It’s a good book . . .”

In Dennis E. Staples’ haunting first novel, Marion Lafournier is Ojibwe, gay, and very much at loose ends. Since finishing university, he’s worked in a dental office, lived without many connections in a town on his home reservation in Minnesota, and picked up men (mostly closeted ones) on hook-up apps. It’s a life, and not a bad one, but it lacks momentum. Like so many guys he went to high school with, Marion’s on the verge of a nothing life that will slide him monotonously into middle age.

Change seeps in when a mother and daughter offer him a puppy he can’t resist: “brindled, but with a white underbelly and piercing blue eyes.” He’s warned, “Good luck with the pup. He’s a rezdog.” The warning’s not entirely clear, but possibilities lie behind it: that rezdogs are difficult, that they’re feral, that they’re magical. Still, Marion makes room for the animal in his life. Basil the dog becomes his path to relationships with others. Marion might be a man on his own, but Basil is a dog that few can resist.

His emotional life shakes up when an anonymous hookup proves to be a high school crush. Shannon, deeply closeted and stand-offish, seems equally drawn to Marion, asking first, “Can we go back to your place?” then adding, “Maybe we could go for a walk first?” Shannon, who thinks of himself as straight, won’t be seen kissing in public, but he keeps coming back, diving into Marion’s world carrying all the wild emotions that he can’t express in his everyday life. He’s wrong for Marion: white, closeted, working a menial job, but he’s almost constantly present, and his life is so much harder than Marion’s, so much more miserable, that Shannon seems as much a rescue as Basil.

This Town Sleeps takes place on a reservation, where being American Indian is the default. The white residents are under economic pressures not to be racist, at least, since they work in largely Indian-owned business. Yet native identity remains largely undiscussed, perhaps because this is a book told from the inside. Daily life doesn’t need to be explained to those living it, and keeping the peace between characters means avoiding debates on history, politics, and race relations.

While Marion is the book’s anchor, he’s not its only narrator. The perspective slides from Marion’s first person to Shannon’s second to a third that encompasses individual memories and community knowledge. There are moments where this is useful: a twelve-year-old murder underlies the novel’s events, and its causes and aftereffects are community-wide. But the loss of Marion’s charm and immediacy mean that these shifts in subjectivity derail the narrative, leaving the reader to re-orient, chapter by chapter.

The accompanying shifts in time nearly create a structural haunting. This Town Sleeps is, in many ways, a ghost story, but that story keeps wandering away from its spectres. Compared to, say, Eden Robinson’s magnificent Native-gothic novel Monkey Beach (2000), Staples’ novel feels a little unpolished. But this is Staples’ first book, and there’s a deep pleasure in watching him find his voice in it.

Staples’ book carries the additional weight of representation. It’s not just a first novel, not just a queer novel or a ghost story. American Indian writing, read by a wider audience, always collides with the problem of representation. How much does the audience know, or need to know? Who is represented? How fairly?

Here, Staples shines. He weaves the quiet threads of spiritual life with the day-to-day activities of a modern community. There isn’t a single way to be Indian here. Traditional rules of gender and culture battle with changing attitudes: “Some reservations did not have this same sort of taboo [against women drumming], but to cover her ass, Cecilia asked permission from a medicine man to sing. Or so she claimed. Whenever she was asked who gave her the blessing to take a man’s seat at the drum, she gave a different name. There was no database of accredited elders or spiritual leaders in North America. If the name and the story sounded correct, who was to stop Cecilia Aysibohn from singing or teaching?”

In spite of the novel’s weaknesses, This Town Sleeps is genuinely enjoyable. It has threads of mystery and romance. It combines humor and horror. It’s a good book, and a preview of the better books Staples will certainly write.