Tough Sh*t: Life Advice from a Fat, Lazy Slob Who Did Good 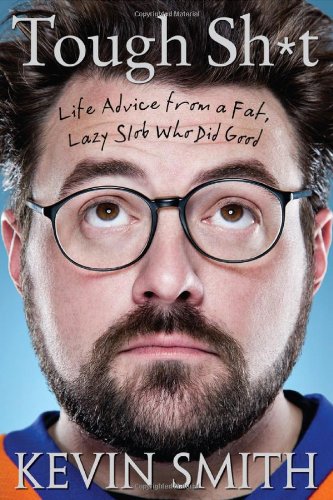 “When it comes to memoirs, things don’t get more heartfelt than this. And when it comes to storytelling, few could match the humor, passion, and humanity of these pages. It’s great that, after making films, producing podcasts, writing nonfiction books, and, most recently, appearing on television in AMC’s ‘Comic Book Men’ (largely taped in Kevin Smith’s own comic book store), he has finally turned his attention to the printed page. Hopefully, his memoir out of the way, he will turn his attention to fiction. One can only imagine what sh*t he will churn out next.”

Those already familiar with Kevin Smith as the creator of such films as Clerks and Chasing Amy will not be surprised that he has decided to name his memoir Tough Sh*t, as author/director Smith has never been one to shy away from the language commonly heard in convenience stores, parking lots, on subways or in shopping malls. Indeed, the language contained in the book is neither for the faint of heart nor the particularly pious.

What may come as a surprise, however, is the fact that, underneath all that sh*t—and Mr. Smith chooses to celebrate excrement in the title of each of his chapters, “Holy Shit,” “The Shit I Made,” “A Little Shit for the Road,” etc.—the message he is conveying to his readers could not be more conservative or fundamentally American.

Here is a man who, based upon his own words, loves his wife and family, is seeking success on his own entrepreneurial terms, and believes in teamwork as the means to the most successful conclusion.

This last bit comes to him from his own personal hero, hockey great Wayne Gretzky, whose name appears in the text at least as much as Mr. Smith’s wife, Jen Schwalbach’s name does, or film producer Harvey Weinstein’s, although he gave Kevin Smith his big break by Miramaxing his first film, Clerks, or even actor Ben Affleck’s, although he appeared in several of Smith’s films. Even Quentin Tarantino, the filmmaker most revered by Mr. Smith, is held in a position of less awe.

And so it is of no small import when, about Gretzky, Mr. Smith writes,

“And my brain exploded when I read the numbers and realized that the greatest hockey player who ever lived—a scoring genius like no other—had more assists on his record than goals. He didn’t need to score every time he was near the net with the puck; if you were on the ice with him, Wayne Douglas Gretzky would rather pass the puck to you—so you could score.”

This from the man who, a few pages before, had written, “We’re all hockey players at heart. We’re goal oriented . . .”

If hockey then is Smith’s chief metaphor for life—and what else can we conclude when, after describing the game in all its violent action, he writes, “Just like life.”—then what can we take away from this:

“It’s an exhausting but exhilarating game, best when played with heart. If you go out there unprepared, you’re gonna lose teeth. Actually, with age, you’re gonna lose some teeth regardless; might as well lose ‘em fighting for something. It’s a fun game, a brutal game, a beautiful game, the fastest game.”

Mr. Smith, while he never advocates a high school diploma, much less a law degree, insists on preparedness, consideration, and cooperation as means of coping with the brutality of life, making this a surprisingly good book to hand off to an alienated youth, troubled teen, or gamer/slacker—any or all of whom might well read the book given their likely respect for the man who wrote it.

More life lessons come from Mr. Smith’s work in film, from the moment in which, in 1991, he set out to make the movie Clerks by maxing out his own credit cards, to the time, 20 years later, when he decided, after morphing from being an independent film maker to becoming the guy that Warner Brothers would go to with troubled scripts (this after Mr. Smith managed to bring in the film Cop Out—written by himself, it was originally titled A Couple of Dicks—in on time and under budget, even with the bombastic Bruce Willis heading the cast) that the film business was no longer for him.

What had happened during that period of time was a shift in the movie industry itself. Miramax, which had courted and supported independents, had been sold to Disney, a company that was in the business of making sure bets. And film itself had shifted from being perceived as an art form to being considered a commodity.

This led Kevin Smith to a period of transition in which he reinvented himself from a filmmaker to a media personality. Where others, several generations ago, had placed themselves in front of the television cameras on nighttime game shows like “What’s My Line,” in which rakish celebrities exchanged snide looks and witty retorts, Mr. Smith instead grasped early on the value of the internet as both the medium of the day and the means by which any might take their product to the general public.

The story of how Kevin Smith took his podcasts and monetized them into his new career is a life lesson worthy of Oprah.

And better still is the story, told in the chapter titled “The Shit That Happened on the Plane” of how Kevin Smith ended up in the headlines only a couple of years back.

The story is simple enough: Mr. Smith, who has battled weight issues all his life, was asked to leave a plane because it was deemed that he was too fat to sit in only one seat, even though he was able to comfortably lower both armrests—the standard that airlines supposedly have set to determine the need for an extra seat.

Although the airline succeeded in removing him from the seat, they had not reckoned on the fact that Mr. Smith has more than one million followers on Twitter, that he had his smart phone with him, and he began to tweet about the incident the moment he returned to the airport waiting room.

What happens next, and, indeed, Mr. Smith’s courage in being willing to write about the entire mortifying event as well as his skill in telling the story (one tweet: “Diet. How it works: You’re publicly shamed into a slimmer figure. Crying the weight right off has never been easier!”) make this chapter the highlight of Tough Sh*t.

When it comes to memoirs, things don’t get more heartfelt than this. And when it comes to storytelling, few could match the humor, passion, and humanity of these pages.

It’s great that, after making films, producing podcasts, writing nonfiction books, and, most recently, appearing on television in AMC’s “Comic Book Men” (largely taped in Kevin Smith’s own comic book store), he has finally turned his attention to the printed page. Hopefully, his memoir out of the way, he will turn his attention to fiction. One can only imagine what sh*t he will churn out next.