Tough Luck: Sid Luckman, Murder Inc., and the Rise of the Modern NFL 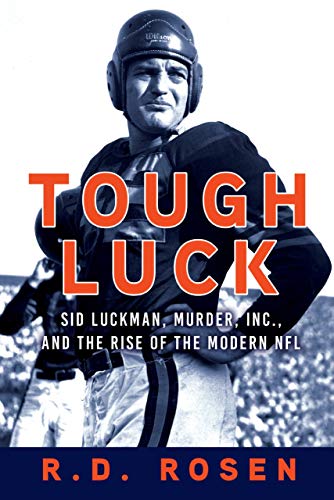 “Although interesting and well-written, Tough Luck toggles to and fro throughout, alternating between the worlds of professional football and organized crime, and this approach betrays a weakness in the narrative . . . Tough Luck is less a traditional biography and more a slice of time in the history of the country, when politics, sports, and crime intersected.”

Authors are always on the hunt for a good story and R. D. Rosen certainly found one, right in his own neighborhood, growing up as he did around the corner from legendary Chicago Bears quarterback Sid Luckman in the Highland Park neighborhood of the Windy City.

Of course that is not the entire story. The kicker is that Luckman’s father, Meyer, who ran a small mafia-connected trucking business, was convicted in the gangland murder of his brother-in-law while Sid was a teenager. As Sid Luckman’s star began to rise, his father was serving a long prison sentence in Sing-Sing. This dichotomy serves as the central conceit of Rosen’s biography of the great Chicago Bears quarterback, entitled Tough Luck.

Sid Luckman’s father was rarely mentioned by the press in conjunction with his son—even as Meyer Luckman’s trial and conviction was front page news in New York. Whenever Meyer Luckman was referred as a parent of his famous offspring, it was as a small business owner who had fallen on hard times and was no longer around the family. Although Meyer Luckman died in 1944, Sid would always refer to him as having passed earlier than that.

Luckman’s father was a small cog in the wheel of what became famously known as Murder Inc., an organized crime syndicate originally helmed by Louis Buchalter, better known to the public by his alias, Louis Lepke. Tough Luck is the story of how Sid Luckman navigated these scandalous circumstances, or perhaps better put, how the press allowed him to while he became a beloved public figure. This is something that could never happen today of course, which makes the story even more fascinating.

Although interesting and well-written, Tough Luck toggles to and fro throughout, alternating between the worlds of professional football and organized crime, and this approach betrays a weakness in the narrative. Luckman, a classic extrovert, rarely revealed his true feelings about difficult matters. Little if anything is shared from his internal voices. Therefore a central question about Sid Luckman’s feelings about his father, other than remembering fondly receiving a football from him at age eight, are unresolved. Did he ignore him, dislike him, was embarrassed by him, or attempt to help him? Or all of the above?

The author admits the answers remain a mystery since Luckman almost never spoke about his father, even in private, and provided only the sparest of details on those rare occasions when he did drop his guard. There are hints that Luckman attempted to have his father’s prison’s sentence shortened, but even those details remain secret, so what exactly those efforts entailed if they were undertaken at all are unclear.

It is interesting to note that Luckman’s own children did not know the story of their grandfather’s sordid past and murder conviction—of a family member no less—until told to them by the author.

The chapters about Murder Inc. are well-written and interesting, but have much less to do with Sid Luckman and the National Football League than the book’s title would lead one to believe. Luckman had nothing to do with his father’s business or Lepke, nor did these underground actors impact Sid Luckman and his career—although curiously, at times in his life he did associate with those on the fringe of the legal side of society.

As far as the football side of the story goes, the book makes clear that Sid Luckman was at the forefront of one of the biggest changes in the history of football, the “T” formation, an innovation that opened up offenses in a way that changed the game forever. Luckman’s athletic career began at Erasmus High in Brooklyn where he was a multi-sport star but at his best on the gridiron, leading his team to two all-City titles before matriculating to Columbia to play for a sub-par college team, where he was mentored by Coach Lou Little.

Despite his team’s poor showing, Luckman finished third in the 1938 Heisman Trophy balloting. But Luckman was reluctant to pursue professional football until George Halas convinced him that the “T” formation would exploit his talent. In the traditional “single-wing” formation, prevalent at the time a quarterback was primarily a blocker and therefore suffered a lot of punishment. Luckman was delighted to see that with Halas’ Bears the quarterback often handed off and was able to improvise.

Luckman became a Chicago institution during his playing days. He worked hard, and there are numerous stories of his long rivalry with Sammy Baugh of the Washington Redskins, topped by the Bears 73-0 shellacking of Washington in the 1940 NFL Title Game. Over a seven-year period, Luckman and the Bears appeared in five championship games, winning four as Luckman and his coach George Halas, who along with Lou Little served as Luckman’s surrogate father figures, helped revolutionize football offense by developing the forward pass into gridiron weaponry.

Luckman succeeded as one of the few Jewish star athletes of his time; he is regarded by many as still the finest Jewish football player in NFL history. After his career, Luckman became a rich and successful businessman, known for his generosity.

This is a good story, well written, and its portrayal of the infancy of professional football is interesting. But it suffers in the end by bouncing between unrelated worlds with only hints of connectedness. The story of Sid Luckman is fascinating, but he remains frustrating as a biographical subject because so much of his life was shrouded from those closest to him, a veil that Rosen is only occasionally able to pierce. Tough Luck is less a traditional biography and more a slice of time in the history of the country, when politics, sports, and crime intersected.