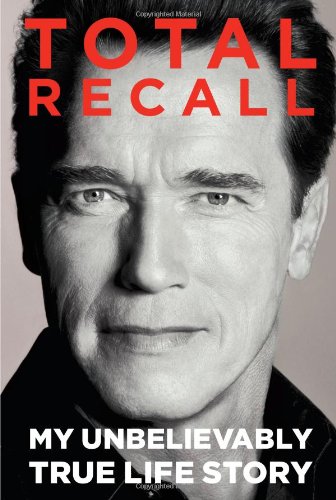 “. . . Mr. Schwarzenegger certainly knows something about pleasing his audience.”

“As every spouse knows, you have to pick the right moment to bring up a loaded subject. The recall of Gray Davis was just a maybe when I flew off to promote Terminator 3 at the beginning of July [2003], and Maria and I hadn’t talked about it or what it might mean for me during the three weeks I’d been away. At home, after the kids were in bed, we often took a Jacuzzi to relax, and that was the moment I chose.

“’This recall election is coming up,’ I said.

“’Yeah, people are saying that you are running, and I tell them they’re crazy,’ she said. ‘You would never do that.’

“’Well, actually, I want to talk to you about that idea. What would you think about me jumping in?’ Maria gave me a look, but before she could say anything, I said, ‘Look, what’s happening to the state! We’re becoming a laughingstock. When I came here, California was a beacon. I know I could go there and straighten it out.’

In the light of the things we have come to know about Mr. Schwarzenegger in the past few years, it is that last line, “Don’t do this to me”—whether said with wide eyed abandon or in a quiet whisper—that impacts.

Especially in considering how many times in the course of their long marriage she has had likely been given the opportunity to repeat them, up to and including the publication of the volume in question.

Most especially in the light of the next few lines of the memoir:

And we all know how that turned out.

In a book as big as his bicep, Arnold Schwarzenegger has set out to do more than just share the story of his life. With Total Recall, he seemingly is attempting to justify it, mostly through more or less endless variations on this, the riff he presented at the 2004 Republican convention in which he supported the reelection of President George W. Bush:

“’To think that a once scrawny boy from Austria could grow up to become governor of the state of California and then stand here in Madison Garden Square Garden and speak on behalf of the president of the United States—that is an immigrant’s dream.’”

Now perhaps Mr. S. has accomplished what he set out to do. Perhaps as he signs copies of his memoir to his various fans in various stops in his publicity tour, he feels good handing the signed copies back to their new owners.

Yet having waded through the book and having had an awareness of the author for some decades now—his scandalicious life, the True Hollywood Story nature of his rags-to-riches story, his endless morphing from scrawny (to use his word) boy born in post-war poverty in Austria to muscle-bound Mr. Universe and Mr. Olympia to full-fledged movie star to husband to a member of one of our nation’s most powerful political families to becoming California’s one and only “Governator”—the reader keeps coming back to a single central question: how the hell did this book end up being so deadly dull?

You’d think, given the subject matter, that the chapter titles alone would make for a compelling read.

Total Recall is largely representative of the worst sort of Hollywood memoir.

At their best, they can feature details the reader can happily consider salacious, along with some unknown details (“I’m from Ohio!” or “I thought she was my sister, but she was my mother!”), as well as large dollops of ego-satisfying retelling of personal triumphs (Oscars looming large) balanced out with all necessary admissions (bulimia, rehab, whatever) in order to achieve a sort of parity for the reader and the author by the last page, where we are reminded, as we consistently are by Us magazine, that celebrities are just like us after all!

At their worst, as here in Total Recall, upon beginning the book and entering the mind of the author/celebrity, the reader discovers that all thoughts have apparently been sucked away and replaced by his publicist’s.

Instead of details, admissions, and lots and lots of well-earned mea culpa, Total Recall is sort of a long, wearying investigation of all things Arnie, which, since they are presented strictly from Arnie’s point of view, makes for a long, tedious, even ponderous read—especially in his early years of struggling when he owned only one apartment building where he actually had to live in order to make ends meet.

Which is not to say the book does not contain a few inadvertent moments of dizzying glee, such as when Mr. S. blows director James Cameron away with his deep understanding of the subtext involved in playing a terminator—so much so that the poor guy who had the part all but sewed up found himself unemployed:

“I had a very clear vision of the terminator. I told Cameron, ‘One thing that concerns me is that whoever is playing the terminator, if it’s O. J. Simpson or whoever, it’s very important the he gets trained the right way. Because if you think about it, if this guy is really a machine, he won’t blink when he shoots. When he loads a new magazine in a bun, he won’t have to look because a machine will be doing it, a computer. When he kills, there will be absolutely no expression on the face, not joy, not victory, not anything.’”

Which make the reader wonder if perhaps our author himself was not more or less born to play the role. Because throughout his exhaustive retelling of his own life, little seems to have elicited any emotional response.

Not even Sharon Stone, about whom the author, missing what had to be an juicy anecdotal sure bet, merely comments, “Working with Sharon will always be a challenge.”

Not even about his much publicized marital infidelity. Knowing that it is likely the sole reason that many of us are reading (and buying) the book, Mr. Schwarzenegger dedicates an entire chapter to his long-term relationship with the family maid that produced an illegitimate child, only to sum his fall from grace up with:

“Mildred had been working in our household for five years, and all of a sudden we were alone in the guest house. When Mildred gave birth the following August, she named the baby Joseph . . .”

• Never, ever allow yourself to be alone with Arnold Schwarzenegger.

• And for someone claiming “total recall,” Mr. S. seems to have been inflicted with amnesia lasting about nine months.

Given the box office triumphs of his Hollywood heyday, Mr. Schwarzenegger certainly knows something about pleasing his audience.

And given the manner in which he rather quietly exited the political stage at the end of his last term as governor, he must certainly be aware of the cost of losing the respect, the admiration, even the interest of his audience.

Which makes it all the more odd that he would choose to write a memoir that, even in the hands of an ex-POTUS, would seem both self-serving and sadly deluded.

Instead of writing Total Recall, he might have done better to consider writing In Total Candor instead.