Total Memory Makeover: Uncover Your Past, Take Charge of Your Future 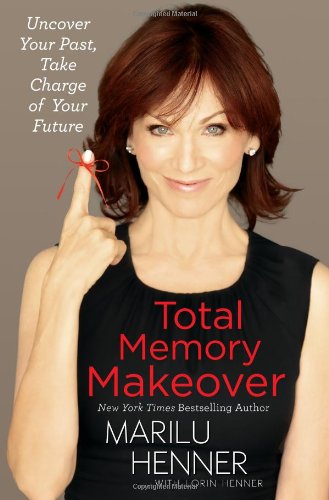 In a year in which the Pulitzer Prize committee decides that no work of literary fiction is worthy of its blue ribbon, how shall we rate the ancillary works of the publishing industry—the cookbooks, the “summer reads,” the how-to guides?

How, specifically, does one judge a self-help book called Total Memory Makeover, as presented by the actress-turned-author Marilu Henner, who has, in the past, authored such tomes as Marilu Henner’s Total Health Makeover and Wear Your Life Well?

Perhaps, as it is a guide to improving memory, the best and fairest way to critique her work is also the most basic one: by asking the question, “Is reading this book likely to help its reader to improve his or her memory?”

The answer to this is, perhaps surprisingly, yes.

The reader who takes the time and care to work through the book, to experience each of the exercises presented, will find it quite likely that the techniques offered by Ms. Henner will indeed not only increase their ability to recall specific moments in his or her life, but will also find that those memories are enhanced with remarkable sensual detail.

Snapshots of memories did indeed come into focus like the old Polaroid pictures used to fade into view, all in the back of my eyes as I worked through an exercise in sense memory (something rather akin to the Stanislavski Method favored by actors in the last sixty or so years): my six-year-old hand holding a mouse-in-the-house balloon, that I suddenly remembered was red, the smells of the animals and the wood chips, the sudden exciting sight of a woman standing on the backs of two white stallions, on foot on each, her left arm upraised, gesturing to the spangled woman riding the “silver slipper of a moon” (to get all Tennessee Williams about it) high above the center ring.

All from a night at the circus many years ago.

The thesis of the book was spelled out for both Ms. Henner and her readers, when, way back in the 20th century, essayist and philosopher George Santayana famously wrote: “Those who cannot remember the past are condemned to repeat it.”

But Ms. Henner has her own way of expressing it.

“Insanity is doing the same thing over and over again and expecting different results.”

And then she writes:

“When you are cognizant of your memories and can call upon them as needed, it keeps you from making the same mistakes over and over again and helps you avoid that pitfall Einstein called insanity. It also makes you better at sizing up situations and making the right choices, as well as understanding why you are the way you are . . .

“How much would your life change if, from this moment on, you had the ability to always make the right decision in everything you did? It goes without saying that your life, anyone’s life, would improve instantly and dramatically. For example, think of Bill Murray’s character Phil Connors in the film Groundhog Day. The movie’s premise is that Phil must relive the same day over and over again. Eventually, after many repetitions, Phil reexamines his selfish life and finally finds the wisest choices, best responses, and most helpful actions for every single moment within that isolated day. And in less than twenty-four hours (twenty-four hours for everyone else, that is) he becomes the most respected and beloved man in town, gets the girl of his dreams, learns what matters most in life, and sets a course to live happily ever after.”

While Santayana’s mot may be a bit more bon, author Henner does get major points for making us all see that, for lack of a clear vision based upon active memory of our life’s journey so far, we each of us are more or less trapped in our own versions of Groundhog Day.

Luckily, she also has devised a method by which we can all get on to the next sunrise in our own lives as well, which is the crux of the book.

In Total Memory Makeover, the reader learns about the different aspects of memory and how each impacts his or her ability to live life to the fullest. The reader is, however, also faced with the face that Marilu Henner is herself something of a “memory savant,” born with an ability that science has named HSAM, or Highly Superior Autobiographical Memory. Because she is one of a handful of people on planet Earth who are known to possess HSAM, she has been the subject of no less than a report on the newsmagazine “60 Minutes,” and has taken part in scientific studies, which only adds credence to her text.

As she puts it:

“I can’t tell you what combination of nature gives someone a superior autobiographical memory, but I can tell you that I have learned and retained my most important life lessons from having one. But this book is not just about my memory or the feat I can accomplish with it. It is much more about what this ability ahs taught me and how you can use these lessons to transform your memory, your past, and ultimately, your future.”

Thus, this is not a book that will, as many others do, teach you how to memorize the order of the cards in a deck, or long sequences of pi. It is not a book about improving one’s memorization skills, however helpful that might or might not be. Instead, this is a book about reclaiming what, in many cases, has been lost—the individual’s ability to recall the details of his or her own life. And as such, this is perhaps the most valuable book on memory to have been published to date.

This is therefore a book about revelations—the private, personal revelations that can come about when one is able to give context to a restructured and reinvigorated ability to recall.

To this, Ms. Henner, in her final chapter, digs into the same source material that informed her bestseller Healthy Life Kitchen and provides an excellent, concise overview of how diet and exercise affect memory (and general brainpower) and how the reader can best integrate his or her efforts on both the physical and mental planes to create the best and most healthful result.

It is always most impressive, in this reader’s opinion, when in today’s culture of dependency on “experts,” an individual chooses instead to blaze their own path to health and healing. Ms. Henner is just such an individual, and as her impressive track record of books old and new attests she gets remarkable results.