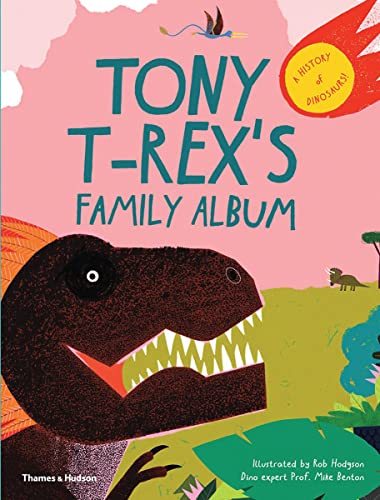 “Even with (or because of) the poop jokes, Tony T-Rex’s Family Album: A History of Dinosaurs is a keeper.”

This book is half fact, half fun. The author pretends to be a dinosaur, and the story is told in first person.  T-Rex dinosaurs lived during the Jurassic Period, which starts on page 10. But before that, Tony the T-Rex says, “If you don’t believe my version of the story, ask the scientists.”

Page nine explains that dinosaur bones don’t look like large lizard bones because “a dinosaur has a very deep socket for the thigh bone to sit it and a hole in its hip bone. Dinosaurs have an extra hole in their skull between their eye socket and nostril. What for? Nobody knows.”

Information is delivered in little sound bytes with paragraphs sprinkled over the double page spreads with plenty of art in between.

Benton shows his sense of humor with sound bytes such as Smell You Later. “Flipper could scan the water with her nostrils to find where certain smells were coming from. Trust me, if you/ let one rip she’d know it was you!”  Another example is XXL. “The diplodocus continued to grow even as an adult until it was extra-extra large. Any dino who fancied Dippy for dinner would have bitten off more than it could chew.”

The art is bright with bold colors and simply drawn dinosaurs. Sometimes the spreads are vertical instead of horizontal. The Cretaceous Period section shows a map of the continents at that point in time, just as the Jurassic page did.

The last part of the book explains how the dinosaurs were wiped out by a meteorite that crashed into the Gulf of Mexico and created enough dust to block out the sun. “75% of the species on Earth vanished and no four-legged animals over 55 lb survived. The temperature dropped, marking the beginning of a very long winter.”

Sometimes the black words on dark blue background make it difficult to read the text. The amount of information in the 64 pages is often overwhelming, but the good news is that back matter includes: The Great Hall of Fossils (where to find them), Where in the World (to find dig sites), Find Your Own Fossils, a glossary called Dino Words, and an index. The front has a cool table of contents which takes up two double-page spreads showing art of each dinosaur.

The book is a hit for kids and adults. It will become a regular check-out at every library that puts it on its shelves. The only thing one might want to know more about was the Triassic Period, which only had one sentence about it. “The Triassic mass extinction event had just killed off the ruling reptiles of the time, making room for us to rise up in the ranks.”

Even with (or because of) the poop jokes, Tony T-Rex’s Family Album: A History of Dinosaurs is a keeper.