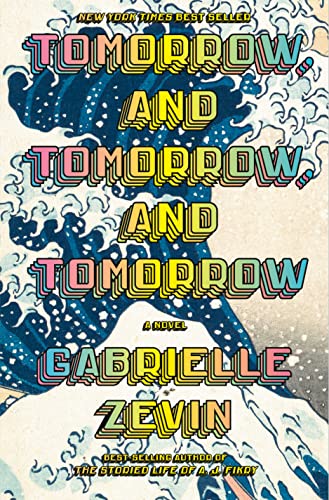 “a masterpiece that works on both a grand scale, and a minute, more intimate one.”

It’s clear from the premise alone that Gabrielle Zevin loves games, but readers don’t have to be gamers to appreciate this story (though there are many Easter eggs hidden for people who have played even basic-level games). Everyone can relate to the desire to lose yourself in a fictional world when the real one becomes too much to bear, and everyone knows what it feels like to wish for a do-over.

Sadie and Sam meet in a hospital as kids; Sadie is there with her sister, who has cancer, and Sam is recovering from an accident that has left him with numerous scars, both mental and physical. The preteens bond over games and soon form a strong friendship. But a falling out means they won’t speak again until they’re in college, nearly a decade later.

When they do meet by random chance as undergrads taking complex courses in math and computer design, they decide to take a run at designing a game together. With the help of Sam’s roommate, Marx, they push themselves to the brink and ultimately find great success.

Zevin explores this drive of creativity, and how it can lead to the detriment of relationships and even damage oneself. The characters ultimately desire different things—Sadie wants to be an artist, with all that heady word implies. “Sadie had willed herself to be great: art doesn’t typically get made by happy people.” Sam wants to be popular and well-liked, but he also uses the games they design as an escape from his “unreliable” body.

“He was tired of moving so carefully . . . he wanted to surf, and ski, and parasail, and fly, and scale mountains and buildings. He wanted to die a million deaths like Ichigo, and no matter what damage was inflicted on his body during the day, he’d wake up tomorrow new and whole.”

Who hasn’t dreamed of a world with limitless chances to get things right? Zevin draws parallel themes of the permanence of life versus an idyllic world full of fresh starts throughout the entire book. Sometimes it is an overt reference—there’s a whole section set within an Oregon Trail-type game, where the reader slowly figures out who is playing the characters—but it’s often more subtle.

The detailed descriptions of the games themselves are artistic and layered and will make readers itch to pick up a console, even if they’ve never played before.

The story continues after the achievement of their first game, with Sadie, Sam, and Marx forming a company, dealing with their newfound celebrity, and continuing to strive to make the next big thing. They experience the joy of stretching their imaginations and seeing what is possible, but there are inevitable lows playing the blame game with the shame of failure.

Marx is the glue holding Sam, Sadie, and their entire company together, and he often appears beatific when compared with the other two main characters, who are deeply flawed. Yet their faults only serve to make the story more human. Their yearning, betrayals, and ambitions morph and change over the years as they grow and mature into adults. Watching the complications between these three people emphasizes how hard it is to be in a long-term relationship with someone, whether it’s romantic or platonic.

Beyond all this, the book also covers themes of sexism, disability and pain, and loss and grief, somehow managing to tie everything together without ever feeling overly complicated. It’s a masterpiece that works on both a grand scale, and a minute, more intimate one.