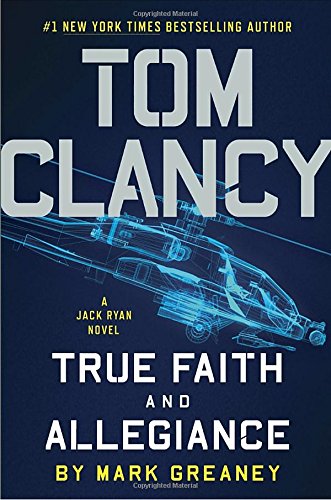 “an artful mosaic that converges with breakneck speed toward the end of the book, bringing the story to a climax and conclusion that are ultimately very satisfying . . .”

Mark Greaney has continued Tom Clancy’s iconic characters in his sixth novel featuring the Jack Ryan father and son duo, and it is a magnificent page turner.

The novel starts at 100 mph and maintains that speed throughout, weaving a compelling plot, plenty of tension and suspense, and the cast of characters that Clancy fans have followed for nearly 30 years.

The basic plot of the novel is both compelling and frighteningly realistic, and is, as the saying goes, ripped straight from today’s headlines. Needless to say, anyone who has worked in the defense or intelligence industry will shake their heads at Greaney’s twist to the story and ask themselves, “Wow, could something like this really happen?”

The mark of a good techno-thriller is that the technology and lingo compliment and not distract from the story, and this book handles this story challenge quite well. Readers expect high tech weaponry, techno heavy plots, and realistic actions scenes, and Greaney masters all of these, keeping the jargon down to the minimum while using it to augment the story.

Certainly there no anti-heroes nor no moral complexity to these booksthe good guys are good, the villains are villainous, although Greaney does grant that being a villain does not mean a character can’t be devious and cunning. A reader may certainly gnash their teeth at the ease with which the villain seems to be able to carry out the plan of mayhem and destruction.

Most importantly for a book like this, Greaney has mastered the art of weaving four or five different subplots and their associated minor characters into an artful mosaic that converges with breakneck speed toward the end of the book, bringing the story to a climax and conclusion that are ultimately very satisfying when the final page is finished.

For Tom Clancy fans, and now for those of us that have become Mark Greaney fans of Tom Clancy’s characters, this will make an excellent holiday page turner, providing just the right mix of plot, character, and pacing to keep you turning the pages by the Christmas tree lights.