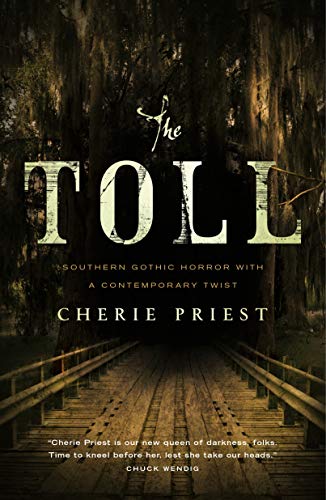 “The author has taken the isolation of the Okefenokee Swamp and magnified it into a story of dread, fear, and supernatural inevitability.”

At the time, it seemed like a great idea.

That’s what Titus thought when he suggested he and new wife Melanie honeymoon at the Okefenokee campgrounds in extreme southern Georgia. No, he’s sure it was a mistake. They crossed a bridge not marked on their map, and suddenly Titus finds himself lying in the middle of the road with Melanie nowhere in sight.

“He sat up, fast enough that his head swam and his vision fluttered. The SUV was behind him, both driver and passenger doors hanging open. The hood was warm, the engine was off. The bridge was gone, Melanie was gone, and Titus was all alone and he wasn’t sure where he was.”

Not far away is the little town of Staywater. It has a bar called Thirsty’s— referred to as “Dave’s,” because Dave operates and owns it—businesses (mostly empty), its own version of a police department, and assorted peculiar townsfolk, among them Cameron, a boy left on a front porch and raised by the two old ladies who opened the door.

“Those old ladies have lived here longer than anybody else who‘s still alive. If anybody knows what’s going on, it’s the pair of them. Or maybe one of the ghosts, but mostly them ghosts don’t talk.”

The police are sympathetic. They organize a search for Melanie, but no one is optimistic that she’ll be found.

“I hope she’ll turn up.” From a far table, the distant woman said, “But she won’t. People go missing, right before the park. Ain’t no human on earth had anything to do with it.”

Seems too many other people have disappeared on that road when that unknown bridge suddenly appears.

What Titus learns and the others already know is that something lurks in the waters of the Okefenokee, an age-old something that has to be appeased with victims, and if its cheated and doesn’t get what it wants, it becomes very angry.

Titus cheated it by not disappearing along with Melanie—who’s going to pay for that?

A certain reader who visited the Okefenokee in the days before it was transformed into the current Nature and Wildlife Area, was very impressed by The Toll. At that time, there was an eerie desolation about those miles and miles of brackish water whose surface was broken only by the stumps of dead, Spanish moss-hung trees that could throw a shiver into the staunchiest soul.

Nowadays that image has been no doubt been very much modified by the upkept and modernization of the area with “outdoor recreation, birdwatching, canoeing/kayaking, wilderness camping, and visitor services.”

Surely Cherie Priest was writing about that former image, for she has the description down pat, the reader commented. The author has taken the isolation of the Okefenokee Swamp and magnified it into a story of dread, fear, and supernatural inevitability.

Unlike the dark Southern Gothic, with inbred townspeople worshipping an age-old horror, the inhabitants of Staywater are a likable, if quirky bunch, and the town is a bit of a supernatural Green Acres, with a ghost dog who lives in a tree, another ghost who inhabits a specific stool in the bar named Thirsty’s and the mannequins in the store windows who swap clothes when no one’s looking. No one is in himself a threat to anyone.

In fact, the entire story could have easily become satirical and comic if it weren’t for the pall of dread hanging over the town, and the hints and insinuations everyone drops. It doesn’t take long to decide that these people know something, but they’re afraid to say it out loud.

In author Priest’s hands, it becomes a masterpiece of disquieted tension.

Reading this novel could be compared to stepping into thick mud that easily becomes quicksand; you take that first step, turn that first page, and things are fine. With the second step, it gets interesting, but maybe it’s a little difficult to move. With the third step, you’re thoroughly hooked and you can’t pull away. In fact, you may not want to, until you discover what is lurking in the swamp’s waters, demanding its due.

Don’t struggle; that only makes it worse.

Unlike real quicksand, after finishing The Toll, you can close the book and walk away—but the story will stay with you for a long, long time.