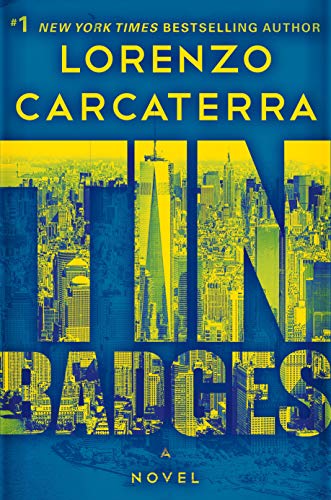 “Tin Badges is a tough and gritty crime novel with a feel-good layer you’re going to enjoy.”

Tank Rizzo is a tin badge, a retired New York Police Department detective paid through a discretionary fund to work cases the NYPD is too swamped to handle or are deemed too cold to warrant attention. The arrangement keeps Tank active and in the game, but when he accepts a case that seems simple enough on the surface—a break-and-enter topped by rape and assault—things quickly turn nasty in no time flat.

Working with a team that includes his best friend and disabled former partner, Pearl Munroe, Tank is pulled into a dangerous battle with Gonzo, a drug kingpin who’s determined to protect his empire at all costs. When Tank probes the connections between the break-and-enter case and the tentacles of a drug business spreading throughout the city, Gonzo quickly makes it personal, and those closest to Tank end up paying the price.

Tin Badges is Lorenzo Carcaterra’s latest crime novel. A former writer for the television series Law & Order, he’s perhaps best known for Sleepers (1995), which was made into the movie of the same name, directed by Barry Levinson and starring Kevin Bacon, Robert De Niro, Dustin Hoffman, and Brad Pitt.

The greatest strength of this novel lies in its characters. Tank is a solid protagonist who drives the first-person narration, but Carcaterra has surrounded him with an intriguing cast of eccentric specialists, including a street musician/fence who works as the team equipment wrangler and a Roma psychic who also runs numbers and handles intelligence chores.

Additionally, the author has not neglected the love interest, pairing Tank with Connie Tramonti, part-owner of an Italian restaurant/bar/jazz club two doors down from Tank’s Greenwich Village brownstone. That Connie’s father Carmine is a retired veteran of the law-and-order wars from the other side of the fence only serves to make the relationship that much more interesting.

To further complicate Tank’s life, his estranged brother and sister-in-law die in a car crash that may or may not have been an accident, and his orphaned nephew Chris moves in with him. A life-long bachelor, Tank’s not exactly trained in the fundamentals of raising a teenager, especially one with an active interest in online crime solving who wants to insert himself into his uncle’s latest case.

It’s easy to see why Tin Badges has already been optioned for a TV series by the executive producer behind Rizzoli & Isles, NYPD Blue, Longmire, and The Closer. With this cast of characters and a premise that allows Tank to step into any given case at any stage in its development, Carcaterra has constructed an attractive vehicle for an ongoing series.

In this particular novel, however, a tighter control of the plot would have helped, as the last third of the story passes through a few rough patches on its way to a fairly uneven climax. The novel reads as though it was pieced together over a prolonged period of time, with certain elements welded into place in subsequent drafts in order to hold the whole thing together.

As well, although the characters are varied and interesting, their dialogue is somewhat uneven, at times a little forced or clichéd, and they play a little too close to type. Next time out, hopefully, Carcaterra will take the time to explore various members of the team in more depth and with more subtlety.

At the end of the day, though, Tin Badges is a tough and gritty crime novel with a feel-good layer you’re going to enjoy. It’s the perfect reading material for a long weekend or a pleasant fall day at the cottage with your feet up and a glass of Italian wine close at hand.