Time Will Clean the Carcass Bones: Selected and New Poems 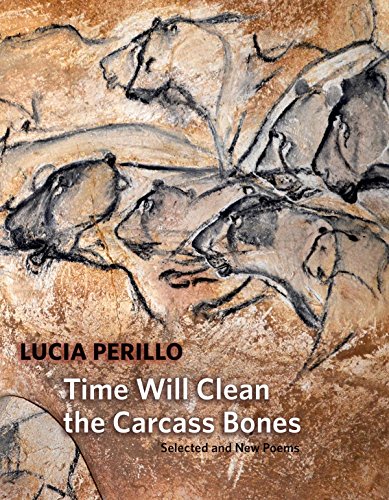 For readers who consider poetry the language of allusion, something to immerse in as transport to an image-soaked world, there is much to be learned from the lyrically practical narrative found within Lucia Perillo’s Time Will Clean the Carcass Bones, a book that will forever change the perception of the nature of narrative poetry. Look at how Perillo crafts the opening to “Message Unscripted”:

the plants on the porch gone leggy and brown, and moldy

from the damp. Don’t stick your head in a plastic bag

the spiders say, you think I’m being whimsical but I say

they say it in  these webs besilvered with rain, two

hanging side by side from the railing, another two

strung perpendicular, one from the dying potted peony,

one from the dying potted dahlia. ART SAVES LIVES

What is clear from this opening is that the accepted, often imitated and venerated Route 66 of narrative verse need not fear finding deviation from the well-traveled path. In fact, the lyrical approach that is evident in Perillo’s poetry makes a more potent narrative because it travels so far from the route. Her style infuses her narratives with strength and moment, opening a reader’s view to things often lost outside any kind of literary landscape, like the place of spiders in the playing out of everyday life. Or the reason for quitting medical school in apposition to the burning of a Girl Scout sash with badges, as detailed within her poem, “Dangerous Life”:

had book 9 of Paradise Lost and the lyrics

to “Louie Louie” tattooed on her thighs.

That morning as the wind was mowing

little ladies on a street below, I touched a Bunsen burner

to the Girl Scout sash whose badges were the measure of my worth:

But I kept the merit badge marked Dangerous Life,

for which, if you remember, the girls were taken to the woods

and taught the mechanics of fire,

around which they had us dance with pointed sticks

lashed into crucifixes that we’d wrapped with yarn and wore

on lanyards round our necks, calling them our “Eyes of God.”

Now my mother calls the pay phone outside my walk-up, raving

about what people think of a woman—thirty, unsettled,

Some nights I take my lanyards from their shoebox, practice baying

those old camp songs to the moon. And remember how they told us

that a smart girl could find her way out of anywhere, alive.

As she has shown us with this poem and will show readers of Time Will Clean the Carcass Bones, again and again throughout the book, the lyrically driven potency of Perillo’s narrative will make readers succumb to the stories within her poems, but more than that, her narratives establish a tone that opens a gateway to the world of reflection, the universe of introspection and the comparative views sprinkled along the way.

Brick laid down, scritch of the trowel’s

then the flat side of the trowel moving

across the top of the course of bricks.

Perillo builds the poem, using the matrix of the bricklayer’s wall, one course at a time, each line a reinforcement of its structure, each line offering the opportunity for turns in the poem, as in the next lines:

My father stepped from the car in his brown loafers,

the rest of him is fading but not his loafers,

the round spot distended by his big toe.

The poem’s progression continues to build in the same even fashion as the wall, the sounds of brick masonry elicited by the poet’s word choices utilizing assonance as well as rhyme: “scritch,” “stroke,” “set,” “flat,” “side,” “across,” and “course.” The language of the poem is very much in the service of the images the poet has offered. But it is the impact created through Perillo’s handling of her poems that pays such substantial praise to her abilities as a poet.

Time Will Clean the Carcass Bones presents a generous selection of Perillo’s poems from six of her books, as well as new poems. The good fortune for any lover of her work is the inclusion of twenty-two of the author’s newest poems within this volume, in addition to selected poems from Dangerous Life, The Body Mutinies, The Oldest Map with the Name America, Luck is Luck, Inseminating the Elephant, and On the Spectrum of Possible Deaths.

The sad truth that this book reveals is that the Macarthur Fellow and Pulitzer finalist died in 2016. But the cosmos revealed within her words? For that, these two lines from her poem, “Yellow Claw,” may provide the best summary: “How strange a translation is the world / of the mind behind the world!” Time Will Clean the Carcass Bones is a book worth reading, and reading again.