This Time Tomorrow: A Novel 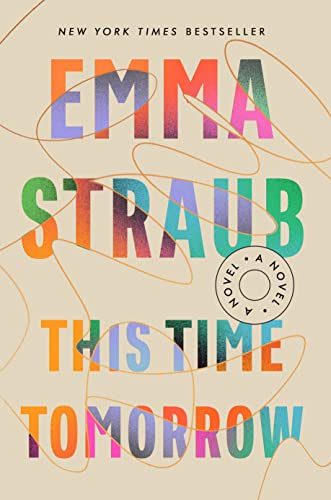 “leaves the reader with a profound sense of satisfaction.”

Nostalgia is a powerful feeling. So much of that power lies in the fact that what is being remembered is something that can’t be captured again; but what if it could? Emma Straub explores this hypothetical in her latest novel, This Time Tomorrow.

Meet Alice. She is stuck. She’s lived in the same tiny apartment for years, works at the same school that she attended throughout her childhood years, plus it’s hard for her to find time to spend with her closest friend.

And her father Leonard, who raised her after her mother left their family to find herself, is dying.

All of this is leaving her feeling a little bit lost on her 40th birthday, so she ends up revisiting some of her old haunts—she gets drunk at a bar in the subway where she used to go as a teen and ends up back at the house where she grew up. Her father still lives there, but he’s in the hospital, and she can’t find her key, so she passes out in the garden shed just outside.

When she wakes up the next morning, she slowly realizes that she’s in her past. Decades in her past, at that. She is turning 16, her father is young and healthy, and she has an SAT class to attend.

Straub readers who are fans of her past literary works might be wary of her first foray into writing a book with elements of science fiction, but they can rest assured: The time travel isn’t the main focus here. Though the simply laid out rules wouldn’t hold up under close examination (they never really do in any circumstance, do they?), it really doesn’t matter. The device is just a vehicle to study the characters, and New York itself, now versus then.

Because the city itself is undoubtedly one of the characters in this book. Straub writes the layers of New York with the loveliest ache that tells the reader she lives there—she seems to have experienced so many of these versions of the city herself and looks back on them with wistful fondness through Alice’s eyes.

Once the newly teenaged Alice gets past her initial panic and bafflement and settles into acceptance of her situation, she slowly starts to realize that the possibilities laid out before her are kind of endless. She is able to appreciate her youth without the stress and anxiety that comes along with being 16.

This freedom gives her a chance to test out some of those “what if” theories that everyone has, to both good and bad results. What if she seduces her high school boyfriend before a rival gets to him? What if she blows off that prep course to spend the day with her best friend and her father?

Throughout all of her journeys back, and there are many, Alice always comes back to her father. He’s dying, and surely there has to be a way to fix it in her past.

As the novel progresses, Alice’s trips back become more frequent, and the descriptions get choppier as a feeling of desperation grows. It gives the feeling of turning a device off and on over and over again to see if that fixes what seems to be an unfixable problem—a last resort.

Yet throughout all of these journeys, Alice’s love for her father and the deep care of their relationship shines though. There’s just never enough time, even when you can travel through it.

She is trying to find the right happy ending but gradually realizes that the experiences along the way are what matter in the long run, not where everything ends up. Straub illustrates this point without seeming trite or clichéd and leaves the reader with a profound sense of satisfaction.