Time Among the Dead 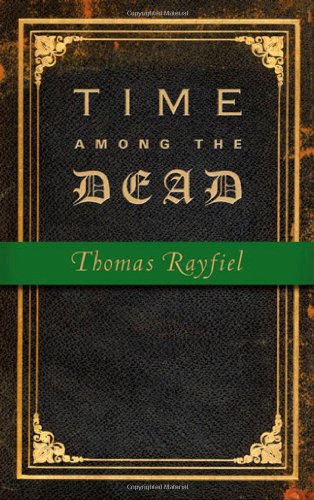 Sometime in the early 1800s, somewhere in not-so-merry old England, doddering old Lord Upton lost his mind. As he slipped into hallucinations and toward death, he harangued his grandson, Seabold, his last close relative. Thomas Rayfiel’s

Time Among the Dead is the story of Lord Upton’s last year of life as he struggles to maintain control of his manor, his grandson, the disorienting world around him, and his own mind.

Novels built around memories intruding into reality can be traced from Shakespeare to Dickens up through Toni Morrison and other living authors. The “deranged narrator” voice is well-explored at this point, and this reviewer has previously opined that the world does not need another sad book about a main character’s repressed memories plaguing his/her last days. With Time Among the Dead, Rayfiel successfully challenges this thesis.

Rayfiel’s Lord Upton is reminiscent of the old codgers who inhabit Charles Dickens’ novels. Upton is acerbic, funny, and Don Quixote-ish in his attempts to maintain filial piety in a world that no longer cares about such things. Rayfiel’s Upton is a man of pure principles, even while rendered ineffective by slipping cognition, a failing body, and a weighty past.

The book is configured as a series of journal entries in the Lord’s hand, allowing Rayfiel to provide a stilted narrative. We know only Lord Upton’s take on the world around him, which gives Upton room to opine on everything from fussy food preferences, to the hollowness of religion, to the corrupting democratic influences of modernism. This is a provocative narrative construct, challenging the reader to disbelieve the narrator and infer what the narrator is unwilling to reveal. Rayfiel forces the reader to sift truth from the inaccuracies of a bitter and sometimes delusional narrator.

As with true literary fiction, Time Among the Dead is more about character than plot, and it is the book’s supporting characters who are, in some ways, most interesting. Three are particularly noteworthy: the adolescent Jenny, speaker of unspeakable truths; the free-loading and manipulative Dalrymple; and the yeoman neighbor, Thomas, whose friendly overtures the Lord sees as crass grasps at a higher rung on the social ladder. But for all of Lord Upton’s interest in breeding and propriety, the Upton family tree contains enough dysfunction to fill a season of Jerry Springer: incest, child abuse, repressed homosexuality, unacknowledged out-of-wedlock children, assisted suicide, and more.

Time Among the Dead contains some lovely writing. For example, Jenny is introduced as possessing “the pre-moral nature of a wild cat, with none of that creature’s God-given grace.” Lord Upton’s imperious father is described from childhood memory as “a fearsome distant object.” Upton describes one of his hallucinations this way: “I delve unwillingly into this cave of remembrance, that the shadows cast by my torch are distended exaggerations.” However, some readers may take issue with the archaic and academic vocabulary that Rayfiel employs (a little too) frequently across the book.