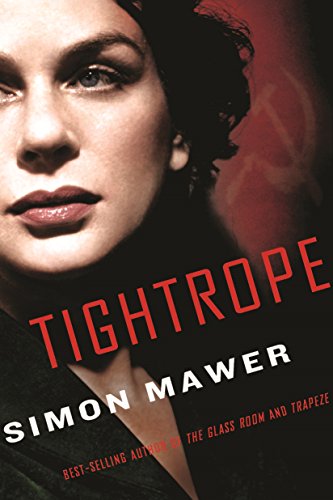 Tightrope by Simon Mawer tells the story of Marian Sutro, a World War II heroine who fought behind the lines to assist the Allies. The story takes the reader to the decade after the war where Marian searches to find herself.

It is a tale written in three parts. The first two parts are character-driven, with Marian as the heroine. Identifying Marian as his protagonist, Mawer turns and designs her own internal devils as the antagonist. He does a superb job of getting into Marian’s head.

Tightrope starts with Marian just getting out of a harrowing experience in a concentration camp, her psyche all but destroyed. During these first two parts of the story, Mawer builds her character from insecure and weak to secure and strong.

Mawer takes the reader deep into Marian Sutro’s mind as she begins her long journey back to some semblance of normalcy. He is skilled at developing her changes through dreams, old memories, and current experiences as he designs a fully three-dimensional character who experiences hope and despair at the same time.

At times Mawer’s style is distracting because his narrator is authorial, expanding the distance between the reader and the story. Most jarring, however, is his point of view changes. At times, his point of view is third person, at other times he slides into first person; he also makes subtle changes of tense from past to present. These changes occur at irregular intervals, mid-chapter and are awkward. This causes the reader to stop and retrace steps to determine who is telling the story and how. While this is not a story that could be carried fully in the first person because of the intrigues that the reader must know, surely third person throughout would work better than unexpected changes flip-flopping back and forth.

Another major character, Sam, is a first person narrator who opens the story in a prologue, then stumbles into the story, again in first person, when least expected. Mawer does a good job of putting the reader in touch with Sam’s emotional attachment to Marian, but considering Mawer’s strong writing skills, that relationship could have been better developed in the third person, saving some confusion on the part of the reader.

It should be noted that Mawer’s writing style, viewpoint and point of view notwithstanding, is riveting. His ability to describe settings—some physical, some mental—puts the reader directly on Marian’s shoulder, experiencing her deep pain and curious memories as she experiences them. There are times where Marian wanders through a maze of mental awareness and at other times, a fog of vague memories and relived tortures. Mawer’s command of the language, his strong vocabulary, pull us into Marian’s life as though it was ours. In spite of the viewpoint and point of view issues with the subtle changes in tense, Mawer uses his skills to invite the reader to continue to turn pages, demanding to know more about Marian’s experience; always curious to know where the story is going.

The timeline of the story is, at places, difficult to follow. As the third part opens up, the story is no longer character-driven, instead becoming a story-driven piece. Mawer spends the first 306 pages defining Marian to the nth degree; taking the reader into the depths of her mind, sharing her experiences, before he gets to the crux of the story. It is in part three where Marian is brought back into the spy business, the information gatherer. This is where the story begins to move more quickly.

Initially Marian seems more to be a puppet than a protagonist; a person who does not seem to have any control over her own life—she just moves forward in a bit of a fog, following directions. In the end, of course, she does take control and uses the very techniques she learned as a spy during the war, to elude her followers and disappear into another life.

Mawer ends with an epilogue to tie up with the prologue, bringing the reader back into the current day. Mawer could have dropped both the prologue and the epilogue without adversely affecting the story. These techniques give the story to Sam and take it away from Marian. It’s very confusing.

Considering the negative technical issues of viewpoint and point of view on the one hand, and Mawer’s strong writing skills in description and character development on the other hand, the question when confronted with choice of reading the book or not, becomes: Which is the stronger pull—the negatives or the positives? Fans of Mawer will not be put off by this style of storytelling while new readers may.