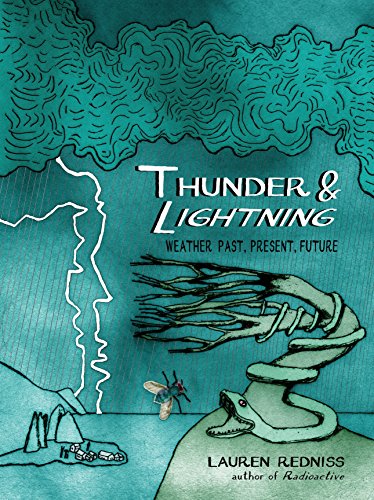 Science writer Lauren Redniss takes us on a most meditative, enchanting, and perilous journey via her prose and with her stunning artwork in Thunder & Lightning: Weather Past, Present, Future. For as much as we think we know about the weather, there is so much more that we cannot fathom about the cold immutable facts that are ever-changing. Redness’ previous book Radioactive was a National Book Award finalist, and her unique gifts as a reporter, storyteller, adventurer, and artist put this book in a category by itself.

Without having to lecture on the science of the subject, Redniss instead goes to hot spots around the globe to literally illustrate her points. She reports on the wildfires raging in Siberia and the disturbing changes in the Arctic eco-system that will have probably global impact in one form or another. During the long polar night she traveled to the Svalbard Islands off of Greenland, where seeds from around the world are stored in silos just in case of . . . well, doom.

At the other end of the earth, Redniss tracks the rains that eventually fall in the Atacama Desert after years of drought, and her paintings of the ephemeral flora and reptilian life are captivating. Redniss’ artwork delivers the message of the earth’s delicate ecological health in memorable ways.

We are with the millions of mourners who are propagandized to interpret the crystal blue skies and red clouds over North Korea the day Kim Jong II was buried as not a meteorological event, but a light show from God to usher Kim into heaven.

Redniss reports wryly about the exploitive nature of religious hysteria about weather as a political tool.  She transports us to medieval Europe as volcanic ash prompted a Little Ice Age but was used as an excuse to burn widows and gypsies as witches for causing bad weather. Flash forward to evangelical preachers blaming LGBTQ Americans seeking civil rights for causing weather catastrophes.

Weather is more political than ever with the global warming deniers not wanting to cut into their profits with bothersome regulations that would protect the environment. She quotes geo-atmospheric scientists, natural science historians, and people who are living with the effects of extreme weather trends around the world. Redniss writes “Many researchers, governments, and military strategists see climate change as a potential ‘threat multiplier.’”

She cites the Pentagon’s 2010 Quadrennial Defense Review statement that climate change has resulted in “significant geopolitical impacts around the world, contributing to poverty, environmental degradation and the further weakening of fragile governments. . . . contribute to food and water scarcity, will increase the spread of disease, and may spur or exacerbate mass migration.” The 2014 update from QDR adds to that list weather “conditions that can enable terrorist activity.”

But with all of these gathering storms to contemplate, Redniss’ illustrations of weather around the world are provocative and poetic calls to environmental action. Her artistry and unique analysis reach past academic discussion and neutralize political hot-buttons. She brings a completely authoritative, humanistic, scientific point of view to such a vast subject. I predict Thunder & Lightning will be considered a classic illustrated volume—if the planet survives us.