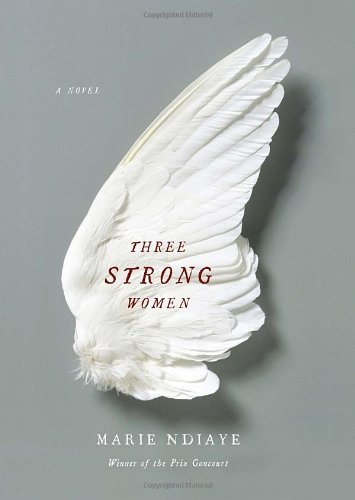 “These stories torment readers with the possibilities and unfulfilled potential . . .”

Three Strong Women is tormenting. Its characters are tormented, their lives are tormented, and some of the writing linguistically torments readers with its languid, insightful, and idiosyncratic nuances of internal dialogue and character description.

Three Strong Women is good, bad, and indifferent, as are Norah, Fanta, and Khady, its three antagonists. The story takes place in three parts or acts. Each story lands us inside the head of one of these Senegalese women.

The title is somewhat misleading for these women are not strong, in a traditional sense—in body, mind, or spirit—but are strong in self-doubt, remorse, and hopelessness.

Long wandering sentences and stories within and of themselves are not necessarily a trait of all African writers, but tend to dominate much of the language, as it does with Ms. NDiaye’s, even though she was raised in France and now lives in Germany.

Here is a brief and—believe it or not—a brief example. When Norah is visiting her father’s home in Senegal:

“She found herself adopting the tone of peremptory volubility that she never used with anyone but her father, the tone intended to forestall his attempt to have Masseck, and before Masseck Mansour, do what she insisted on doing herself, insisted out of an awareness that he so hated seeing his guests perform the slightest labor in his house, thereby casting doubt on the competence of his servants, that he was quite capable of saying to her, ‘Masseck will wash your hands for you,’ without for a moment imaging that she would fail to obey him as those around him, young and old, had always done.”

This first section about Norah sounds the most autobiographical in its tone, though there is no indication that it has any resemblance to the author’s personal life.

Norah is urgently asked by her father in Senegal to leave her home in France and come immediately, without any explanation. She does so reluctantly and is caught up in a family drama involving her brother that plays out and comes to an abrupt end, as if everyone is at peace with the situation, though nothing could be further from the truth.

It is the truth of Norah’s loathing for her father that shines most brightly from this story.

The second story is about Fanta and her boyfriend, Rudy, whom she follows to France. The emotional and intellectual complexities that are portrayed in this chapter are quite astonishing, but often feel as if they are being told instead of shown. The internal thoughts and messages we indulge in in response to our environment or previous experiences and memories, are superbly revealed through the minds of Fanta and Rudy, but soon override any external sense of action, reaction, or movement. Thus the internal dialogue grows tedious and self-absorbed.

In this section of the story, Rudy feels inadequate, out of touch, and incompetent, taking out his self-loathing on Fanta. His remorse for his words and actions then adds to his low self-esteem. His selfishness and immersion in his internal world make it difficult to connect with his character or have any empathy for his sense of isolation, even though his feelings of emptiness and loneliness are palpable.

In the final story, Khady must deal with the loss of her husband and family and endure nightmarish predicaments and experiences. She tells herself that she is “still Khady” in spite of all that takes place, but what remains of who she is has literally been stripped bare. What little sense of self that existed at the beginning of her story, has been ripped away by the end.

There is a rare moment of hope and happiness when, “She was herself, she was calm, she was alive, she was still young, and she was in excellent health; every fiber of her being was savoring the kindly warmth of the early-morning sun, and her twitching nostrils gratefully sniffed the salty air blowing in off the sea . . .”

What all the women (and men) in Three Strong Women have in common is a lack of faith or belief in who they are. They each see themselves as inadequate, inconsequential and/or emotionally injured and are unable to be truly loved or thus love another.

No one really comes into his or her own power or feels complete and whole. The stories tell tales and let us know what people are thinking and feeling, but there is little progression, change, or insight with the characters.

There is no salvation. Everyone is doomed to live life as it is. In some respects, this is refreshing and realistic, but readers usually read in order to be taken out of our quotidian monotony, not for immersion in the minds of characters who have accepted the hopelessness of life as it is.

These stories torment readers with the possibilities and unfulfilled potential to which they could have aspired.