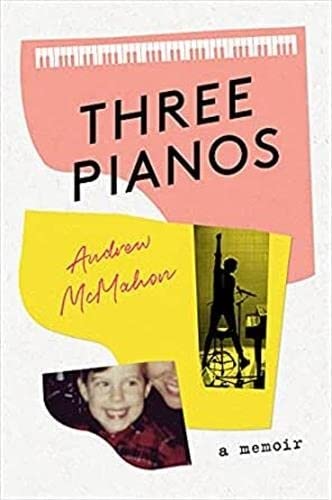 Music memoirs come in many different forms, but Three Pianos by Andrew McMahon is in a small sub-genre: the self-loathing confessional. As such it has one immediate predecessor, Moby’s Then I Fell Apart. In that book, the author’s list of self-regarding actions and cruelty to women is seemingly endless, and not particularly well redeemed at the end.

The same can be said of this well-written autobiography by Andrew McMahon, who is perhaps best known as the piano-playing leader of Jack’s Mannequin and Something Corporate. It’s not really a music book, though the bands are in the background, and it’s not really a portrait of anyone other than himself. Jami is his obsession, then his girlfriend, then the woman he cheats on. Wife Kelly also endures an endless round of bad behavior that includes drugs and both physical and emotional absence. Neither one really comes alive on the page, because McMahon himself is always in the foreground.

“I would be lying not to acknowledge that, at my worst, I’ve employed a carelessness disguised as naivete in pursuit of selfish ends,” McMahon writes. You tell it, brother—that behavior takes up most of the book.

McMahon had a California and Midwest boyhood that was fairly idyllic, in a family headed by a dad who was like a god in his department store domain. But then things get darker. A beloved wealthy uncle dies. His sister shows signs of mental illness. And Dad gets addicted to opioid pain medication, the family fallout from which takes up a lot of space here.

The book is structured around the three pianos of the title, and it includes a lot of italicized passages that directly address said pianos. McMahon was a fickle friend of said instruments, alternately obsessing over them and ignoring their existence.

You’d expect the book to turn into a more conventional music autobiography once McMahon leaves the darkening family fold and joins Something Corporate—a band that had a fair amount of success, was signed to major labels, and sold more than a million records in a 10-year span. But the group doesn’t really come into focus—it’s unclear from the text even what kind of music it makes, though YouTube videos reveal a band bearing some resemblance to Green Day.

By this point Kelly is on the scene, and getting neglected as McMahon’s head is turned by the star-making machinery behind the popular song, as Joni Mitchell put it. There is a cameo from bad boy drummer Tommy Lee, but not much about the band’s three albums. Something Corporate flames out, McMahon forms Jack’s Mannequin, and that one starts to take off, too. But then McMahon has a leukemia diagnosis and almost dies. That part of the book is very well handled.

Kelly, somewhat idealized on the page, is faithfully by his side during what turns into a harrowing ordeal. Against the odds, the author recovers. A rock biopic would probably end there, with McMahon and Kelly (no last names) reunited and facing a hopeful future. But this is real life, and after they get married, McMahon plunges right back into bad rock-star behavior, takes a lot of drugs, and neglects Kelly again.

“I had become a walking ‘fuck you’ to the thing I had survived, daring it to come back and kill me,” McMahon writes. “But for all my running and denial, Kelly held on to her faith in me.” But that faith gets severely tested when the post-cancer pianist/composer goes through writer’s block. “No one suffered more than Kelly. The harder it was for me to write, the more impossible I was to be around. I made a criminal of her, blamed her when the music didn’t come to me, and waxed nostalgic for the days I lived alone.”

Readers who were with McMahon, who explains himself well, might lose patience at this point. Why should we care about this incredibly selfish rock star? Why does Kelly have to seriously threaten to leave him before he finally cleans up? The happy ending doesn’t entirely ring true—can Andrew McMahon actually be trusted?

But McMahon is a gifted writer, one who takes full responsibility for his often-appalling actions (as Moby did). So maybe his next book can be a novel about a rock star who makes better choices—or, if that’s not dramatic enough, even worse ones. At least then it will be fiction and no real people will get hurt.