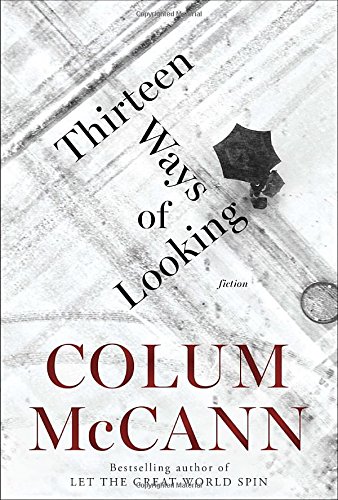 “the best book this year . . . when it comes to literature.”

In an author’s note to his intense and amazing new collection of short fiction, Colum McCann writes:

“Sometimes it seems to me that we are writing our lives in advance, but at other times we can only ever look back. In the end, though, every word we write is autobiographical, perhaps most especially when we attempt to avoid the autobiographical.”

Yet in Thirteen Ways of Looking, McCann instead embraces the autobiographical, consciously or unconsciously.

Earlier in his note, he comments:

“These stories were primarily completed in 2014 on either side of an incident that occurred in New Haven, Connecticut, on June 27, when I was punched from behind and knocked unconscious, then hospitalized, after trying to help a woman who had also been assaulted in the street.”

While, according to Mr. McCann, some of the fiction assembled here was written before his much-reported assault, and others after, the power of these stories is in that single concept assault and how it lurks in the mind, just as the word itself is bitten off by sharp teeth when spoken. Each of McCann’s characters experiences an attack of sorts—some physically, others psychically, but all lives explored here are changed by the joint experience of feeling shocked and besieged.

Surely, McCann’s own experience of being knocked flat to the concrete sidewalk informed his telling of the story “Thirteen Ways of Looking,” in which an elder judge experiences a physical assault on the street in Manhattan’s Upper East Side.

The moment of the assault in the titular story is found embedded in a day without incident, notable only for the onset of a snowstorm and the desire, on the part of the elderly judge, to have lunch out in a restaurant with his son, Elliot:

“Surprise, surprise. Kill the fatted calf. Elliot parks his large carcass in the seat opposite, his face engine-red. Just short of steam coming out of his ears. Tie a blood-pressure cuff around his arm and the needle might break the glass.”

The day is revealed on two tracks in a broken narrative: reconstructed by the police from surveillance video, lived by the judge, and by his son who has better places to be with snow threatening, his nurse, the doorman, the waitress, and the other bit players, whose viewpoints flit past, help or don’t help in reconstructing the crime scene.

But the judge, the man with a beautiful mind much mired in constructing his memoir and with a jurist’s eye for the telling detail (“Yet there is something lovely about her cadence. She speaks with bright coins in her voice. A tambourine in her throat.”), the old man is the only one whose point of view matters when it comes to this particular violent crime, as well as the snow and the aches of age (“He used to think that the great grace of old age would be the giving up of vanity, but it is apparent even more these days: the sag of skin, the wrinkles, the eyes surprised by the sight of himself.”) and loss and loneliness, all caught up in a shuffled gait on an icy sidewalk.

The moment before the moment, through the judge’s eyes:

“No more than three steps away and something indeed as got the man’s goose or his gander or his goat or whatever they call it. Hat pulled down just a little bit farther and I can’t even see the shape of his eyes anymore. Mouth in a snarl, but something gentle, too, about that face . . .”

And the moment as well:

“Someone help me now, what’s he saying, the snow blowing hard around us, a cyclorama, and it’s impossible to hear what the man is shouting, spittle coming from his mouth, his own little snowstorm, rapidfire, how many words do they have for it, leaning forward, oh the hat on my head shifting, but what is that you’re saying, man, I can’t hear a word in the thunderous roar, calm yourself down, hold on one second.”

As a man who knows what it feels like to be knocked down hard, McCann hides the moment on the outer end of a dash: “Oh all over the street that white coming down not even the snow can stand up straight and oh—” and leaves it to the reader to render the moment in his own mind. What hits first, the head, the ribs, the ass? Does it all happen quickly, or is the fall ever so slow?

In all four of the stories in Thirteen Ways of Looking, characters are created and left to their own devices in circumstances that the rest of us would happily avoid.

In one, a mother grieves over the loss of a child who she may or may not ever see again, in the beautifully named “Sh’khol.”

In another: a writer on deadline creates a character named Sandi, makes her be a soldier stationed in a lonely outpost on New Year’s Eve and leaves her to calculate the time so that she phones home precisely at midnight:

“There have been problems with the phone signal in the past—dropped calls, endless ringing, failed satellites.

“It is too early yet to call but she keys the phone alive anyway and touches the ridges of the numbers, a rehearsal.

“Out beyond the outpost, nothing but the dark and white frost on the land. The stars themselves like bullet holes above her.”

And the last—because there are only four pieces in the slim volume, the titular novella and three short stories—begins this way:

“She is falling, every so faintly, into age. It is not the slowness of rising in the morning, or the weariness of eyesight, or the chest pains that appear with more and more regularity, but the brittleness of memory that disturbs her now—how the past can glide away so easily, how the present can drift, how they sometimes collide—so that when she sees her torturer on television, she is not sure if her imagination is playing tricks, or if he has simply sifted through the sandbox of memory, slid headlong down the channel of thirty-seven years to tease her into a terrible mistake, or if it is truly him, appearing now on the late Spanish-language news, casual, handsome, controlled.”

Titled “Treaty,” this story—the last of the four in the collection—not only is the finest that McCann has to share, but one of the finest short stories in recent years. To tell more than what the author has already told in that fabulous first paragraph is to tell too much—that memories of fear, pain and imprisonment come back to haunt an elderly woman in the moment that she sees the face of the man who once raped, threatened and tortured her nearly four decades ago.

This is a story to be read. Savored. And, along with the others in the volume (especially the novella that gives the book its name), studied.

Because there is perhaps no other author alive today who better understanding of the moment of the quick pulse, the rasp of the exploded, impacted-upon breath, or the potency of disbelief when it is all that one has to cling to than McCann does.

And there is also the language in which these tales are told. Language that is honey-dipped, chocolate-coated, covered and iced and filled with every good and tasty and beautiful thing.

Is Thirteen Ways of Looking possibly the best book this year if we are to worry ourselves of categories like “best of” when it comes to literature?