The Third Reconstruction: America's Struggle for Racial Justice in the Twenty-First Century 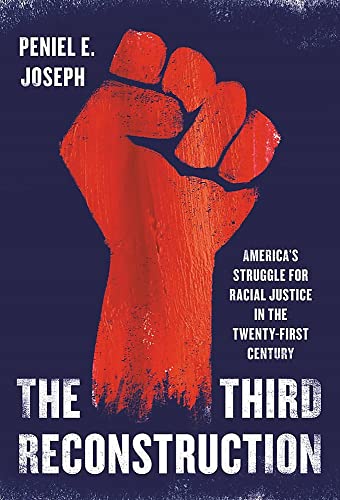 “In his timely and necessary The Third Reconstruction, Peniel Joseph has written a book with the power to engender the same consuming and transforming passion that the author’s own early exposure to Black history awakened in him.”

In an essay titled “The Propaganda of History,” W. E. B. Du Bois, 20th century America’s foremost social scientist and public intellectual, wrote, “[If] we are going to use history for our pleasure and amusement, for inflating our national ego, and giving us a false but pleasurable sense of accomplishment, then we must give up the idea of history either as a science or as an art using the results of science, and admit frankly that we are using a version of historic fact in order to influence and educate the new generation along the way we wish.”

Du Bois’ essay appeared both in The Crisis, the official magazine of the NAACP, and in the author’s definitive history Black Reconstruction in America, in 1935. But Du Bois could have easily written it about the current controversies over The 1619 Project, Critical Race Theory, the persistent celebration of Lost Cause mythology, ongoing state-level campaigns in America’s public education system to erase the uglier and more inconvenient aspects of our country’s history, and widespread efforts to cast doubt on the occurrence or significance of past events about whose veracity there is no serious historical debate.

In Black Reconstruction in America, Du Bois recognized and established two essential facts: that Reconstruction represented nothing less than a second founding for a nation ostensibly built on ideals of democracy and equality, and that widely accepted and perpetuated white lies about that era formed the foundation of white supremacy’s social and political predominance fifty years later.

“More than any other Black thinker of his generation, Du Bois identified Reconstruction, the years of hope and pain following the formal end of slavery, as America’s most important origin story,” writes historian Peniel E. Joseph in The Third Reconstruction: America’s Struggle for Racial Justice in the Twenty-First Century, a magnificent new book that absorbs Du Bois’s critical analysis and carries it forward to our present historical moment. “Du Bois wrote from a sense of tragic responsibility in order to set the record straight about a nation whose pastoral beauty could exist alongside public spectacles of lynching and of white Americans picnicking over the charred remains of burnt Black flesh.”

Joseph writes with a comparable sense of tragic responsibility and urgency in equally perilous times. His singular contributions to recent American historical scholarship have included the essential biography of Freedom Movement icon Stokely Carmichael, the landmark study of the Black Power and Black Arts movements Waiting ’Til the Midnight Hour, and The Sword and the Shield, a revelatory analysis of how the radical visions of Martin Luther King and Malcolm X—two leading movement figures typically perceived as operating at ideological antipodes—converged at the end of their respective lives.

The central thesis of The Sword and the Shield is that Martin Luther King stood at the forefront Black America’s centuries-long quest for full citizenship, while Malcom X fought without compromise for Black dignity, so long and so violently and summarily denied.

The Third Reconstruction advances the theme of the parallel struggle for Black citizenship and dignity to the end of the Obama era and beyond. Joseph astutely characterizes a period in which a Black man with a deep commitment to Black citizenship and an abiding faith in American exceptionalism secured the nation’s highest office, and a white failed businessman goaded that Black president into publicly debasing himself by showing proof of his citizenship, then rode a rising wave of white backlash all the way to the White House. Joseph also distills the historical forces that impel a nation to embody such dramatic and consequential contradictions to two essential impulses: reconstruction and redemption.

Historian C. Vann Woodward coined the phrase “Second Reconstruction” to describe the post-World War II civil rights era. Many historians and pundits have characterized Obama’s presidency as ushering in a Third Reconstruction, with journalist and essayist Ta-Nehisi Coates going so far as to allude to (first) Reconstruction-era Black congressman Thomas Miller’s lament “We were eight years in power” in the title of his 2017 collection of essays on the Obama years.

The Third Reconstruction extends the analogy to encompass a third Redemption, drawing additional parallels to the era of white terror, Black disenfranchisement, Black re-enslavement, Lost Cause mythology, and North-South white reunion that followed and reversed Reconstruction’s eight-year exception, from the Colfax massacre of 1873 to the Wilmington Coup of 1898.

In Joseph’s analysis, this cycle repeats itself not just because we ignore, distort, and deny history (a symptom, rather than a root cause), but because the conflicting impulses that drive reconstruction and redemption coexist, and comprise who we are. “America itself has a dual identity, reflecting warring ideas about citizenship, freedom, and democracy,” Joseph writes. “There is the America that we might call reconstructionist, home to champions of racial democracy, and there is the America that we might call redemptionist, a country that papers over racial, class, and gender hierarchies through an allegiance to white supremacy. Since the nation’s birth, its racial politics have been shaped by an ongoing battle between reconstructionist America and redemptionist America.”

The Third Reconstruction digs deep into America's racial past, drawing in essential reconstructionist figures like Frederick Douglass, Thaddeus Stevens, Ida B. Wells, and W. E. B. Du Bois, as well as the disparate redemptionist likes of Andrew Johnson, Ben Tillman, and William Dunning. But it is primarily a book about recent history and current and ongoing struggles.

Joseph’s third-reconstruction frame of reference spans the racially acute tragedy of Hurricane Katrina, the frustrations and disappointments of an Obama presidency (including the Voting Rights Act-gutting Shelby v. Holder decision of 2013) that at first made Blacks “passionately hopeful,” mounting organized white resistance to Obama as his two-term presidency progressed, the rise and reign of “America’s most hyperbolically racist president” in Donald Trump, and the insurrectionist assault of January 6, 2021.

Joseph also characterizes current U.S. president Joe Biden as a former redemptionist now articulating reconstructionist ideas. Most poignantly, he chronicles the ceaseless, era-defining killings of unarmed Black people at the hands of white police, up to and including the 2020 murder of George Floyd, which Joseph argues proved the “tipping point” of the Third Reconstruction and drove the modern abolitionist struggle to unprecedented levels. Joseph writes, “There would, forever it seems, be an America before Floyd’s public execution and another one after.”

Barbara Ransby’s Making All Black Lives Matter: Reimagining Freedom in the Twenty-First Century (2018) provided the first indispensable real-time analysis of Black Lives Matter and the Movement for Black Lives, a sort of 21st century analog to Howard Zinn’s SNCC: The New Abolitionists (1964). That Ransby’s own inspiration, through her masterful biography of Ella Baker, one of the Second Reconstruction’s transcendent figures, helped shape the BLM movement, says much about how Black Lives Matter differs from its antecedents. Baker’s exalted status underscores BLM’s conscious and practical centering of Black women forbears and feminist, Queer, Latinx, Indigenous, immigrant, and Asian American leadership.

Ransby and Joseph both discuss how Black Lives Matter would prove to be a movement that largely dispensed with the patriarchal structure of most civil rights organizations in the 1950s and 1960s. It has emerged as an unabashedly intersectional struggle strengthened, not divided by the “multi-issuism” that, in Peace and Freedom: The Civil Rights and Antiwar Movement, historian Simon Hall contends made it difficult for civil rights and antiwar activists to find common cause in the 1960s. The women at the forefront of Black Lives Matter, as Joseph writes, “did not simply resurrect your grandmother’s civil rights movement.”

Joseph’s analysis of the current struggle draws largely on Ransby’s work and projects it into the post-Floyd era, with a definition of “abolition democracy” that confronts racist policing, the “New Jim Crow” of the carceral state, and the yawning wealth gap that racial capitalism ensures.

Joseph recognizes BLM’s heightened ascendancy following the murder of George Floyd as the single “largest social justice mobilization” in American history. “Black Lives Matter offered the Third Reconstruction a new vision of American democracy as deeply rooted in radical Black dignity,” he writes. “In this sense it emerged from the gap between the racial optimism of the Obama era and the melancholy reality of Black life at the lower frequencies during Obama’s presidency. BLM stood on the shoulders of previous generations of Black radical activists, but has also advanced the concept of radical Black dignity by expanding the range of individuals and groups within the Black community worthy of such recognition. In so doing, BLM activists continued the tradition of reconstructionists whose fervent pursuit of dignity placed them at the leading edge of those advocating for radical abolition democracy.”

Joseph also expands on the critical work of Michael Eric Dyson and Claude A. Clegg on the Obama presidency, and the costs of a gloriously triumphant 2008 presidential campaign that also set unsettling precedents. The ever-pragmatic Obama proved frustratingly reliant on respectability politics—often becoming scolder-in-chief when addressing Black audiences—and championing an American exceptionalism largely at odds with lived Black experience. Arguably, even early on in his least obstructed moments, Obama forged a presidency in which redistributive justice took a backseat to the advancement of “colorblind” universalist public policy.

Joseph recounts with particular poignancy a December 2014 White House meeting between Obama and BLM activists that proved nearly as dissonant as a defensive Robert Kennedy's humiliating showdown with young activist Jerome Smith at a meeting organized by James Baldwin at a posh Kennedy family Manhattan apartment in 1963. Like the attorney general a half-century earlier, President Obama—usually a virtuoso code-switcher—and his young guests seemed to voice irreconcilable worldviews. "Obama’s meeting with the activists put the differences between two versions of citizenship into stark relief: one version, which Obama believed in, framed by American exceptionalism, and another, represented by the members of a new social movement, dedicated to a vision of abolition democracy."

Joseph also writes convincingly of how Trump’s MAGA movement capitalized on the type of white racial grievance and redemptionist backlash that has followed every historical surge toward still-denied full Black citizenship. Joseph asserts that Trump recognized—to a degree that Obama didn’t, or at least felt he couldn’t publicly acknowledge—how widely white Americans continue to perceive any Black advance as posing an existential threat to their proper position of socio-economic pre-eminence. Trumpism, Joseph writes, “expertly trafficked in the same white nationalism, resentment, and racism that helped to destabilize the promise of Black citizenship during the First Reconstruction.”

The Third Reconstruction skillfully harnesses the past to illuminate the present, refuting fatuous claims that the latest wave of white supremacist reaction is some “not who we are” anomaly, and foregrounding an intersectional new abolitionist movement fighting to bring forth an anti-racist third founding.

The book is also a memoir of sorts, tracing Joseph’s Black American and Haitian origins and the lived and observed experience of American racism that drew him to the historical roots of Black Power and a career as a scholar-activist. “Studying Black history provided a balm, one that eased the pain, trauma, and anger brought to the fore by anti-Black violence and premature death,” Joseph writes. “The passion to study broadly, to empathize deeply, and to organize politically still burns within me.”

In his timely and necessary The Third Reconstruction, Peniel Joseph has written a book with the power to engender the same consuming and transforming passion that the author’s own early exposure to Black history awakened in him.