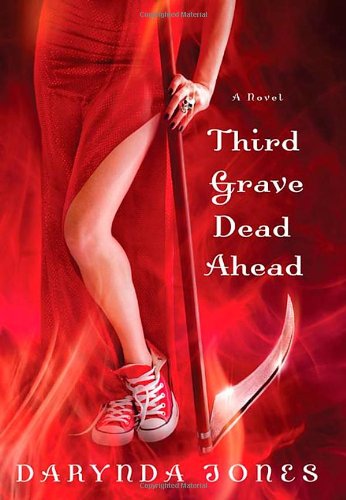 “. . . despite a few slight disappointments, Third Grave Dead Ahead is still incredibly enjoyable and as entertaining as always. Charley is still on top of her game. Reyes is still as sexy and smoking hot as ever, and Darynda Jones still keeps you coming back and begging for more.”

“There was a dead clown sitting in my living room.” From anybody else, this statement would be slightly horrifying, but when you’re Charley Davidson, Private Investigator and conduit to the Pearly Gates, it’s just another day.

In this third installment, Darynda Jones continues her sizzling Graveyard series by picking up where Second Grave on the Left leaves off: Charley has bound Reyes Farrow to his corporeal body to prevent him from committing suicide. As a result, she is living on as much caffeine as she can get her hands on because every time she falls asleep Reyes is there, incredibly angry and passionately aggressive—and not necessarily in a bad way.

While Reyes alternates between threatening Charley’s life and lobbying her to release him from his body, Charley’s mind is on other issues: Dr. Nathan Yost wants to hire her to find his missing wife, but Charley is getting very unsettling vibes from the good doctor.

Then there’s the angry biker gang that now lives in the abandoned asylum, home to the very helpful Rocket—a ghost who can tell whether a person is dead or alive by just hearing their name. With the bikers in residence, Charley has to jump fences and avoid three Rottweilers in order to get the scoop.

During one such visit, Charley finds herself surrounded by bikers, including their leader Donovan, who ends up hiring her to find the person responsible for poisoning his dogs. To top things off, Charley’s father wants her to quit the P.I. business, something that she refuses to even consider, and is unaware of just how far he’s willing to go to make it happen.

And just when she thinks she has seen it all—including being followed by the ghost of a little girl holding a really big knife—Reyes escapes from prison and drops a bomb: Earl Walker, the man Reyes is in prison for killing, is actually still alive and tying up a few loose ends—and not in a good way.

Readers have complained that Ms. Jones’ witty writing style is a tad annoying. Although I totally appreciate her sense of humor, I can see their point. Sometimes, you can get too much of a good thing. In this go-round the zingers just keep on coming and, it did, at times, get a bit grating.

In an effort to get maximum one-liners in, Ms. Jones slightly compromises the integrity of her characters. Whereas Cookie is usually the voice of reason, her persona begins to blend with Charley’s during their verbal sparring, making it difficult to tell them apart. With nobody playing the straight man, their interactions take on the tone of a vaudeville act. Even surly Uncle Bob gets in on the action, which totally goes against his role as the charming curmudgeon.

The handsome silver-eyed cynic, known as Garrett Swopes, played mostly in the periphery of the storyline, which is a bit of a waste. While there’s hope for the potential meeting of the minds or at least the lips between Garrett and Charley, Ms. Jones apparently has other plans for him—how those plans play out remains to be seen.

Further in the character realm, Mistress Marigold, who was introduced at the end of the previous book, doesn’t show up until the middle of this one. Though there is an interesting twist to her, her arrival is more of a tease than an informative introduction. Despite the interesting tidbits she revealed, Marigold creates more questions than answers.

As is done with most series where each book is written to both play off of the previous books, as well as be able to stand on its own, so goes the same for this series; however, the problem with this approach is the excessive amount of backstory that is repeated in order to catch newcomers up, an issue that is quite prevalent in Third Grave.

But despite a few slight disappointments, Third Grave Dead Ahead is still incredibly enjoyable and as entertaining as always. Charley is still on top of her game. Reyes is still as sexy and smoking hot as ever, and Darynda Jones still keeps you coming back and begging for more.