Think of a Number: A Novel (A Dave Gurney Novel) 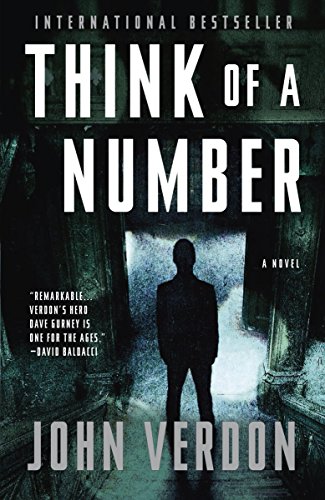 “On the one hand, there was the logic of the law, the science of criminology, the processes of adjudication. On the other, there was pain, murderous rage, death.”

John Verdon, a former advertising firm executive in Manhattan, has produced a brilliant debut novel that offers a cynical and skeptical look at the modern criminal justice system. In Verdon’s words, “. . . the justice system is a cage that can no more keep the devil contained than a weather vane can stop the wind.” If one read this novel with no knowledge of the writer’s background, one would guess that he is a retired policeman or prosecutor. It is quite hard to believe that Verdon has no personal knowledge of the bleak and challenging world that he writes about so expertly in this work.

In Think of a Number, Retired Detective David Gurney and his wife Madeleine live in the hills of Delaware County. She is the smarter of the two, although he is considered to be the most brilliant crime solver who ever worked for the New York Police Department. Gurney is so legendary that his adult son says to him, “Mass murderers don’t have a chance against you. You’re like Batman.”

But Gurney may have met his match when he’s asked by the county district attorney to serve as a special investigator on a serial killer case. The killer seems to do the impossible. First, he sends his intended victim a message asking him to think of a number, any number at all. Once this person thinks of a number, he’s instructed to open a sealed envelope; this envelope contains the very number he just thought of written in ink. As if this is not amazing and frightening enough, the killer subsequently calls the victim and directs him to whisper another number into the phone. After he does so, he is instructed to go to his mailbox. There he retrieves a sealed envelope with the very number he just whispered typed on a page inside the envelope.

Gurney is fortunate in that he’s ably assisted by Madeleine who often sees things he’s missed. But no one can figure out how the serial murderer performs his numbers tricks, or how to capture him. In order to solve the puzzles, Gurney is going to have to consider making himself a target of the killer. Gurney’s logic and research tells him that the serial killer is a control freak, one who kills victims in different states (like Ted Bundy) but operates according to a strict plan.

Gurney must come up with a theory as to what connects these male victims—who seem to have no apparent connection—in order to figure out why they were killed. Once he does so, he begins to formulate a plan that will put him face to face with a madman genius. (The reader, quite fortunately, will not come even close to predicting what’s ahead.)

Think of a Number is a fast-moving, cinematic-style thriller. It is easy to see this novel being made into a film. At heart, it’s an old-fashioned morality play in which a retired white-hat-wearing man must come out of retirement to battle with an all too clever mean-hearted outlaw. Detective Gurney engages the enemy—a modern devil—while understanding that in the gritty field of criminal justice there are no final victories.

This is an impressively written and engaging story. One is advised to refrain from starting it without having cleared a number of hours on one’s schedule; otherwise, hours of sleep will be lost. Once finished, you will no doubt begin—as this reader has—to count the months until Mr. Verdon delivers his next very satisfying thriller.