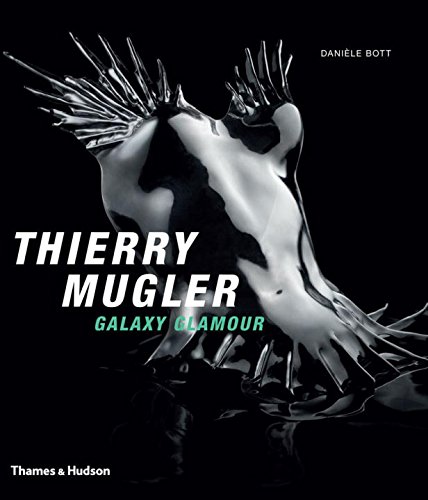 “You are only as good as your last season” is an adage most often applied within the boundaries of the fashion world, but no one has ever addressed what happens when the influence of one designer continues for decades.  Thierry Mugler is a designer’s designer, a visionary, a craftsman, an artist, and some might say genius.  The author has given us more than a sufficient taste of what Thierry Mugler stands for with photos, sketches, and text.

Before there was the rejuvenation of old sleepy brands, before we ever heard the names of Ghesquiere, Galliano, Dundas, Pugh, Tisci, or even McQueen, there was Thierry Mugler.  He laid the groundwork for the latest crop of designers by exhibiting his extreme skills for tailoring, for the exploration of using “new” materials, and for his collaborations which bore nothing less than spectacular results.  Mr. Mugler could conceive of it all in excruciating detail, and Ms. Bott offers us only one segment of his illustrious career.  From theme to sketch to execution to presentation, including make-up, setting, music, and staging, there was no detail too small to escape his vision for the final result. This is partially evidenced with the stills taken from the shows, which are part of the author’s library used for this book.

We have Mugler to thank for the sculptural aspects of his tailoring and seaming; we have him to thank for turning the humdrum fashion show into spectacle; we have him to thank for so many aspects of today’s fashion vocabulary that stem from his original collections.  All one needs to do is scan the visual references provided by Ms. Bott, but it is not enough to just look at the pretty pictures, one must read the text as well.  You will find that Mr. Mugler simply followed his own singular path, and yet every season brought new innovation and new ways to define his particular vision of women.  He showed his adoration of women by accentuating the female body and the aspects which made them hyper feminine—to the point of an almost exaggerated view of femininity.

As with most fashion today, one must be able to imagine beyond that immediate runway creation, and see the “real clothes” that are hiding in plain sight.  With all the theatrics and showmanship that Mugler utilized, it must be made clear that he always produced wearable clothes, at least for his clientele.  Once a woman would pass the “let me try that on” stage, once she knew that she loved the suit or dress, then the Mugler loyal fan was born.  His women swore by the clothes that glorified their shapes.  A wearer of Mugler was the super-sexy woman in a power suit that emboldened her while preserving her feminine side.  There were and are few designers who inspire such allegiance and loyalty among the buying public.

As testament to those who ascribe to the initial adage, why is it that a designer who stopped presenting collections over 15 years ago can still garner such praise and attention, most recently when Beyoncé came under his thrall.  Mugler merely went into his bag of tricks and gave the 21st century a taste of what he had built during the last decades of the 20th century.  Being ahead of your time is just never an easy path.  At some point, someone will take on the ambitious task of exhibiting the entire Mugler vocabulary and not just one segment; but for the uninitiated, this is a great start.