They Are Trying to Break Your Heart 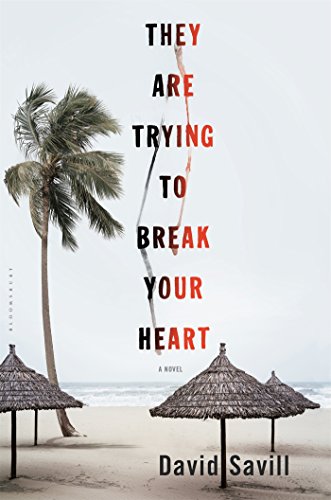 In April 2005 two men on opposite sides of the world are grieving for loved ones who died when the tsunami of December 2004 destroyed a Thai seaside resort. William, a British teacher in Bangkok, lost his ex-girlfriend Anya; Marko, a Bosnian refugee living in the UK, lost his friend Kemal, an older brother figure he had worshiped.

With a story that moves back and forth between London, Bosnia, Thailand, and Cambodia, between the present of 2005 and the events of ten years earlier, told from the points of view of multiple narrators, David Savill uses the natural disaster of the tsunami and the manmade disaster of the Balkans conflict of the 1990s to explore themes of romantic and brotherly love, loss, and redemption.

The choppy narrative, moving from past to present, from place to place, between characters that initially seem unconnected to each other, is at first demanding but ultimately rewarding as the complex story comes together.

Anya, a human rights researcher, has been estranged from her ex-partner William for three years, when he contacts her out of the blue. In need of a holiday, she decides to visit him in Thailand, where he now lives and works. But she has an ulterior motive: in the course of her research work she has heard a rumor that a suspected Bosnian war criminal, accused of raping a woman she has interviewed, is now working at the Thai seaside resort of Kao Lak after having apparently staged his own death ten years earlier:

"Finding facts. It was in her job description. The presentation and analysis of facts. Fact: Kemal Lekić was alive. Fact: Kemal Lekić had been accused of rape, implicated in the disappearance of two women, the abuse of his military role and at least one breach of the Geneva Convention."

Compelled to confront Kemal Lekić herself, she arranges to spend Christmas with William at Kao Lak; William hopes this might be the prelude to them getting back together.

Running alongside this narrative strand is Marko's story: He is shocked to find out that his friend Kemal, whose coffin he had carried to his grave after his apparent death in a bomb blast in Bosnia in 1995, had been living in Thailand and died in the tsunami.

He returns to Bosnia, from the U.K. where he now lives, to attend Kemal's second funeral, filled with conflicting feelings. He is guilty about his love for Kemal's girlfriend, Vesna. He has believed for the last ten years that Kemal's death was his fault; he had sent him on a false rendezvous with Vesna to the square where the bomb that supposedly killed him went off, so that he could meet Vesna himself. He has also heard that this man he once idolized is suspected of war crimes.

Meanwhile, in Bangkok, William is still coming to terms with Anya's death. It seems he may find redemption in his relationship with Missy, an American coworker he has to accompany to Cambodia on a visa run. Missy's down-to-earth presence in his life helps him come to terms with Anya's death, and gives him the courage to finally sort through her possessions. In a work-related file on her computer he finds a photo of Kemal Lekić, a man he remembers vividly from the day of the tsunami.

Back in Bosnia, Marko's cousin Samir tells him the truth about the alleged war crimes Kemal committed.

While the narrative is driven by the two compelling questions of whether Kemal Lekić was innocent or guilty, and whether William will be able to move on after Anya's death, the book is most memorable for its depiction of war-torn Bosnia and its message that the love and friendship between Marko, Kemal, Vesna and their friends and families, can transcend the senselessness of civil war.

In his author's note, Savill says that the novel grew from a desire to capture the "humanity, solidarity and kindness" of his Bosnian friends, and in this he certainly succeeds.