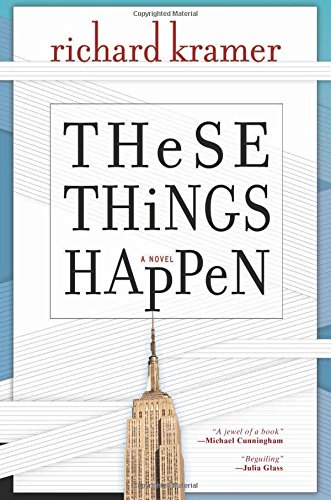 “. . . an introspective and contemporary character study. . . . a well-measured and mature debut.”

Two intelligent high school boys, Theo and Wesley, are best friends. Theo is just elected student class president. Days later, he comes out of the closet. Then something terrible happens. Richard Kramer’s These Things Happen is the story of Theo and Wesley and their families assessing tolerance and homosexuality after the ugly incident.

These Things Happen is set in affluent, liberal Manhattan, a place where homophobia is supposed to be a thing of the past. The boys attend a good private school that preaches tolerance. Wesley’s father, now divorced and openly gay, is a nationally recognized activist for same-sex marriage and other pro-gay causes. The intrusion of violent homophobia into their lives is especially jarring.

Characters take turns narrating each chapter of These Things Happen. Through this wonderful device, Mr. Kramer not only advances the plot but also cleverly reveals motivations and the inner workings of each. As such, These Things Happen becomes much more than a book about “coming out” and homophobia; it is concurrently an introspective and contemporary character study.

Mr. Kramer is at his best, not when focused on the “big” issue of homophobia, but when exploring the subtle disaffection that exists between teens and parents. Passages devoted to parents grumbling about teen vocabulary, fondness for texting, practiced sullenness, and persistent smells are among the book’s most authentic.

Nearly as good are the voices of the boys in the chapters narrated by Wesley and Theo. Mr. Kramer writes convincing boys’ banter as they hopscotch from their major school project, (re-litigating the guilty verdict of Julius and Ethel Rosenberg’s trial) to discussions about other students, family, and sexual preference.

Throughout These Things Happen, Mr. Kramer applies his cleverness to the mundane. In a quintessential teen voice, Wesley observes this about his father’s boyfriend: “My guess is that George, like all older people, is more scared of texting than he is of terrorists.” Wesley’s mother, with a similar mix of perception and snark, observes her son’s moodiness this way: “The sour smell of grievance, like the inside of sneakers, diffuses across the room.”

Earlier in his career, Mr. Kramer worked on the acclaimed television dramas, “My So-Called Life” and “Thirtysomething.” From the former, he has borrowed the focus on teen angst as narrated by perceptive teens. From the latter, he has borrowed the insecurities of highly competent parents caught in the act of flogging themselves for their non-omniscience.

These Things Happen is Richard Kramer’s first novel, but he is no novice. This is a well-measured and mature debut.