There Is Nothing for You Here: Finding Opportunity in the Twenty-First Century 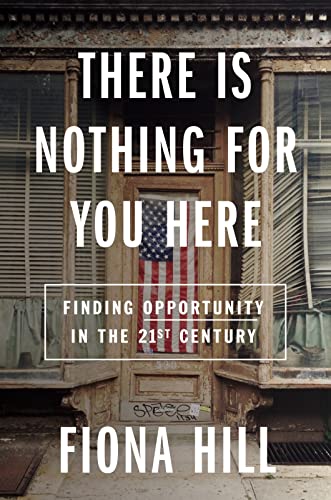 You should read this book if you want to know more about the politics and personal style of Russian president Vladimir Putin and US politics in the Trump era. But author Fiona Hill will also deepen your understanding of social justice issues and economic opportunity as she emerges, a coal miner’s daughter, from the township of Bishop Auckland in North East England (with the highest murder rate in its surrounding Durham County today) and goes on to make a life in the wonkish circles of Scotland, Massachusetts, and Washington DC. Having gradually climbed career ladders in those places and made a home in Maryland, she compares life in the impoverished towns in England, those near the US Capital, and those in Russia, where she studied and worked for extended periods. Everywhere, she found, women struggled with sexism and wage disparities.

Having been admitted to graduate study at Harvard, Hill attended faculty seminars where she had only one set of drab clothes to wear. An older woman, a mere “Associate” at Harvard despite her academic accomplishments, took pity and drove Hill to a TJ Maxx and bought her a set of clothes that would help her make a stronger impression on Harvard’s mostly male faculty. Hill’s English North East accent was also a handicap (as she found when interviewed at Oxford). Some Americans had troubling understanding her.

Gender as well as relative poverty posed problems for Hill. Having graduated from St. Andrews (Scotland’s oldest university) and then from Harvard with an M.A. and a Ph.D., Hill got a position at the Brookings think-tank in Washington. There Hill found that she and other young female researchers were excluded from high level meetings, open to equally young men for their “career advancement.” One senior policy consultant ignored Hill’s name tag and assumed she was part of the coffee catering team.

Some bright male researchers articulated ideas that Hill had recently published without recognizing that their author was in the room and had just spoken. Later, when she attended a “Valdai Discussion Club” where Russian’s Vladimir Putin gave a speech. Hill sat so close she could see that Putin’s eyesight required a very large font on his note cards. But Putin paid no attention to her or another woman seated on his other side. The other woman, a reporter for the press agency RIA Novosti, explained that they were chosen to sit next to the president because they appeared nondescript, like potted plants, and would not attract attention.

Hill worked under presidents Obama and Bush as an intelligence specialist on Russia. She joined the Trump administration as Senior Director for European and Russian Affairs at the National Security Council. But Trump showed no interest in her except to have her type up notes on a phone conversation with Putin.

Hill’s comments on Trump’s White House are similar to those by John Bolton and Bob Woodward, except that she emphasizes the role of populist pressures. “It was an easy slide from Donald Trump’s sometimes perverse machismo and personalization of the presidency into something more malign than benign. His time in office would come to mark not only the contours of the rise of populism in the United States but also the emergence of a definite authoritarian streak in American executive power.”

Trump, for Hill, was a man of the 1980s, when he was strongly impressed by British PM Margaret Thatcher and US President Ronald Reagan. Like them, Trump believed in strong executive power. But Trump had a much weaker character than Reagan or Thatcher. Reagan had a sunny, can-do disposition; Thatcher had an iron will. But Trump thought only of himself and his family. He was selfish to his core and had the “most fragile ego” of anyone Hill had ever encountered.

Whereas Putin tried to keep Russians united by picking on small groups like the LGBTQ+ community or opponents he labeled “pro-Western,” Trump emphasized broad divides to pit political parties, social movements, and religious groups against each other. Putin wanted one Russia; Trump, many Americas—not one.

Hill’s job at the National Security Council reminded her of stories her elders told about putting out fires caused by German bombers in World War II. She had to put out political fires before somebody in the White House blew up everyone. These experiences “would have been dispiriting and pointless if not for the camaraderie and inspiring professionalism of other public servants.” As in an English coal mine, “we were stuck together in a confined space just trying to get the job done without losing anyone in a political accident.”

Hill gave herself two years to see whether she could help shape Trump’s policies for the better. Having witnessed his scandalous behavior at the Helsinki summit with Putin, his ignorant handling of the INF (Intermediate-range Nuclear Forces) treaty, and his refusal to seek or absorb expert advice from her or other specialists, Hill resigned in August 2019. In October she gave closed-door and open depositions regarding Trump and Ukraine. Even there, in Congressional hearings, some Republicans tried to devalue her testimony by suggesting she was another “emotional” female.

Hill’s policy recommendations such as “life-long learning” parallel those of progressives in Washington and elsewhere, except that they are buttressed by comparisons with conditions in the United Kingdom and Russia. Also, based on her own encounters over half a century, she stresses the importance of creating opportunities for young and old lest they be forever forgotten.

Walter Clemens is Associate, Harvard University Davis Center for Russian and Eurasian Studies. He wrote Can Russia Change? The USSR Confronts Global Interdependence, and The Republican Virus in the Body Politic: How to Reboot America.