Then Comes Marriage: United States v. Windsor and the Defeat of Doma 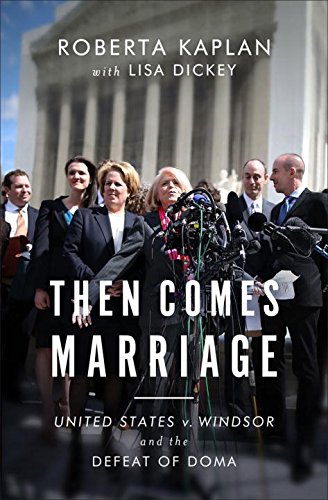 Few people expect a book about the law or a specific case to be a scintillating read. Yet in Then Comes Marriage Roberta Kaplan and Lisa Dickey have done just that and given readers a story worthy of their time.

Then Comes Marriage tells the story of Edie Windsor’s determined effort to challenge the United States because the government required her to pay $360,000 in estate taxes when her spouse died.

This is a compelling story that starts with two women falling in love, getting engaged, and finally, after a 44 year engagement, getting married in Canada. It is a powerful story of love, discrimination, fear, ignorance, and taxes. It is a true story—and that means death is involved.

When Thea Snyder died in 2009, at age 77, she left an extensive estate, a surviving spouse, and a federal estate tax bill of over $360,000. Edie Windsor often says if her spouse had been named “Theo” rather than “Thea” she would not have had to pay a nickel in taxes.

The culprit in all of this was the Defense of Marriage Act (DOMA) passed by Congress and signed into law by Bill Clinton as a knee-jerk reaction to the fear that gay men and women might be able to marry.

DOMA prohibited the federal government from recognizing any same-sex marriages. DOMA carved out an exception to marriage recognition that only applied to same-sex couples. And 84-year old Edie Windsor brought it down.

Kaplan and Dickey take these facts and weave a fascinating narrative that gives the reader an insight into one of the Supreme Court’s most provocative cases. This is not an easy task when the topic involves lawsuits, court documents, oral arguments, and the United States Supreme Court, the latter one of the last great secretive bodies in the country.

Juxtaposing her own story with that of Edie Windsor, Kaplan leads the reader on a nail-biting journey even though the outcome is known.

Kaplan and Dickey are not reluctant to share the credit for the Windsor decision. In particular, they acknowledge the work of Mary Bonauto, an attorney with the Gay and Lesbian Advocates and Defenders in Boston. Bonauto is often hailed as the “godmother of marriage equality,” and that is not a far-fetched accolade. Including Bonauto in the narrative is a good move by the authors.

Kaplan must be commended for recognizing that she could not have accomplished what she did alone. From her partners, associates and support staff at Paul, Weiss, Rifkind, Wharton & Garrison, to Lambda Legal and the ACLU, the list of involved advocates reads like a who’s who in the LGBT legal community. Kaplan benefitted from the work of many people in preparing and presenting this case. That is an important aspect for the reader to understand. None of this occurred in a vacuum.

Then Comes Marriage clearly lays out the complexity of this case, the angst Kaplan felt as the case dragged on, the fear that Edie Windsor would not survive until it was over. The personal dynamics add to the book’s excitement.

Much has been written about the Supreme Court’s decision in Windsor and the full ramifications of that decision continue to be parsed by legal pundits. Kaplan and Dickey give the reader an insightful view into the backstory.

With the 2015 Supreme Court decision in Obergefell v. Hodges, the issue of marriage equality has been decided, and Edie Windsor had a major role in achieving that goal. Her late spouse, Thea, would be proud of her.

Kaplan and Dickey have accomplished what many legal writers strive for and fall short of achieving: a book that lawyers and non-lawyers alike can enjoy. This book deserves a place on everyone’s shelf.