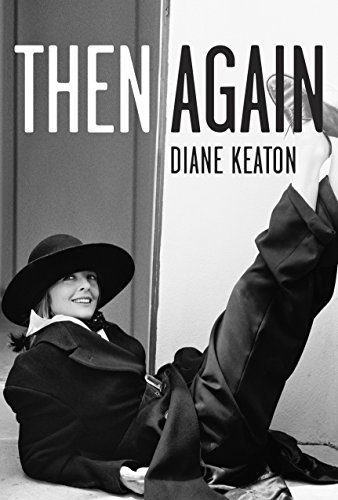 “Safe to say that of all the loves of her life, men’s hats tend to rise to the top of Ms. Keaton’s list, somewhere behind her mother and her adopted children, but somewhat ahead of the men themselves. To witness concrete proof of the woman’s love of hats, one needs only to look at the image of Ms. Keaton that adorns the cover of her book. Not since Yosemite Sam has there been such a hat.”

In the early pages of Then Again, a meditation on life that would best but rather inadequately be categorized as a memoir, Diane Keaton writes:

“So why did I write a memoir? Because Mom lingers; because she tried to save our family’s history through her words; because it took decades before I recognized that her most alluring trait was her complexity; because I don’t want her to disappear even though she has. So many reasons, but the best answer comes from a passage she wrote using those fine abstract-reasoning capabilities she passed on to me. The year was 1980. She was fifty-nine.

“‘Every living person should be forced to write an autobiography. They should have to go back and unravel and disclose all the stuff that was packed into their lives.’”

First, that she has, with the help of her mother, come upon the best and most rational reason for turning her attention to writing her own life’s history. Not self aggrandizement, the source of many a celebrity memoir. Not “setting the record straight,” which fuels many political self-assessments.

Instead a challenge to know and understand one’s self better by submitting a written record of actions taken, thoughts thought, loves loved, highs and lows, successes and failures—all to the printed page. Thus our author approaches the task as something to be wrestled with, giving her work a dynamic richness and depth seldom seen in books of this genre.

Second, that the most important person in her life, living or dead, is her mother. And indeed it is her mother, Dorothy Deanne Keaton Hall, who lives most vividly in these pages, especially when the author herself occasionally falls back on the blurry “la de da” charm that made her best-known character—written for her and based on her: Annie Hall—at once unknowable and completely loveable.

About her mother, she writes:

“Mom continues to be the most important, influential person in my life. From the outside looking in, we lived completely different lives. She was a housewife and mother who dreamed of success; I am an actress whose life has been—in some respects—beyond my wildest dreams. Comparing two women with big dreams who shared many of the same conflicts and also happened to be mother and daughter is partially the story of what’s lost in success contrasted with what’s gained in accepting an ordinary life. I was an ordinary girl who became an ordinary woman, with one exception: Mother gave me extraordinary will. It didn’t come free. But, then, life wasn’t a free ride for Mother either.”

That Dorothy Hall should so strongly believe that each of us should take the time to write the story of our lives is not surprising, given that Hall was such a talented writer herself, one who filled journal after journal with her thoughts, her aspirations and her artwork. At the time of her death, Ms. Keaton records, her mother had filled over 80 journals in 31 years’ time.

Movingly, Diane Keaton records an entry that, she notes, her mother wrote “in a shaky hand,”

“June 1993. This is the day I heard I have the beginning of Alzheimer’s disease. Scary.”

Keaton continues from there, taking over the narration:

Ah, THINK. The word appears again and again in these pages. It opens the book:

“Mom loved adages, quotes, slogans. There were always little reminders pasted on the kitchen wall. For example, the word THINK. I found THINK thumbtacked on a bulletin board in her darkroom. I saw it Scotch-taped on a pencil box she’d collaged. I even found a pamphlet title THINK on her bedside table. Mom liked to THINK.”

Is it any surprise then, that from the daughter of a woman who was herself so driven to THINK, that we should get such a very thoughtful memoir?

And yet, I do it a disservice if I should leave the impression that in these pages Diane Keaton writes only about her relationship with her mother. This could not be further from the truth. While Dorothy Hall remains the central character, there is a world of others. Second to her mother in terms of loving endearment, for example, is comic filmmaker Woody Allen, about whom Diane Keaton writes at length.

Of him and of the most famous of the films they made together, she writes:

“Most people assumed Annie Hall was the story of our relationship. My last name is Hall. Woody and I did share a significant romance, according to me, anyway. I did want to be a singer. I was insecure, and I did grope for words. After thirty-five years, does anybody care? What matters is Woody’s body of work. Annie Hall was his first love story. Love was the glue that held those witty vignettes together. However bittersweet, the message was clear. Love fades. Woody took a risk; he let the audience feel the sadness of goodbye in a funny movie.”

The Woody Allen who emerges in these pages is far different from the character of Alvie Singer, the man who loved Annie Hall. He is presented as a natural athlete, a moody perfectionist—a not altogether kind or supportive sort whose quick wit comes accompanied by a laser-sharp tongue.

Ms. Keaton’s second great love, film star and “Prince of Hollywood” Warren Beatty—about whose direction of her in the epic film Reds, in the best, sharpest line in the book, Ms. Keaton likens to being shot repeatedly with a stun gun—turns out to be “a far more complex character than I could have imagined when I saw him kiss Natalie Wood in Splendor in the Grass at the Broadway Theater in Santa Ana. I was in tenth grade. I’d never seen anything like Warren Beatty. By thing, I mean he wasn’t real. He was to die for.”

In many ways, as Then Again attests, it took the years invested in their relationship for her to finally conclude that her early assessment of the man was quite correct. He was, in fact, many things, but real was not among them.

Other characters jump off the page as well: Actor Al Pacino, with whom Ms. Keaton had a long and checkered relationship. Grammy Hall—the original and actual, the one upon whom Woody Allen based the character in Annie Hall and who, discussing the man who made her famous, said, “That Woody Allen must be awfully broadminded to think of all the crap he thinks of.”—and Grammy Keaton stand as a study in contrasts.

And Jane Fonda, who was, to Ms. Keaton’s thinking, the ultimate Hollywood star, an actress with whom our author shared a secret—one shared by as diverse a group of notable women including Princess Diana, poet Anne Sexton, comic Joan Rivers, and actresses Sally Field and Audrey Hepburn—the eating disorder bulimia, about which Ms. Keaton writes about for the first time here.

By the end of Then Again—a serviceable enough title, and one that well suggests the somewhat slipshod and disorganized manner in which the tale of Ms. Keaton’s life is told—the reader has shared many a secret and many a laugh with Diane Keaton. Her stories of working on the Godfather films with director Francis Ford Coppola (especially the multiple endings that he wrote for Godfather III) and with Jack Nicholson on Something’s Got to Give will amuse all readers.

But the best bits all have to do with our girl Keaton herself. Such as the portions of the book when she discusses her personal sense of style, a sense that she passed on to Annie Hall, and through her, to all the women of America, who upon seeing the film quickly ran out to the thrift store and bought a collection of men’s chinos, neckties, vests, and hats.

Of her sense of style, she writes:

“My all-time favorite outfit was this little getup we put for my high school graduation ceremony in 1963. After I redesigned the Simplicity pattern of a minidress Mom bought at Newberry’s, where I worked in the ladies’ bra department, we hit Goodwill and found the perfect black-and-white polka-dot fabric from an old shirtwaist dress with a wide skirt. Then we splurged and bought an expensive pair of white straw high heels with pointed toes and black pom-poms. I found some black seamed stockings to go with it so I could look more mod. I even had a theory: If I hid my face, if I framed it to highlight my best feature, which I figured was my smile, I would get more attention. But then something happened that changed my life. I was browsing around our other favorite store, the Salvation Army thrift shop, when I found the answer: a hat, a man’s old bowler hat. I put it on my head—and that was it!”

Safe to say that of all the loves of her life, men’s hats tend to rise to the top of Ms. Keaton’s list, somewhere behind her mother and her adopted children, but somewhat ahead of the men themselves.

To witness concrete proof of the woman’s love of hats, one needs only to look at the image of Ms. Keaton that adorns the cover of her book.

Not since Yosemite Sam has there been such a hat.