Their Promised Land: My Grandparents in Love and War 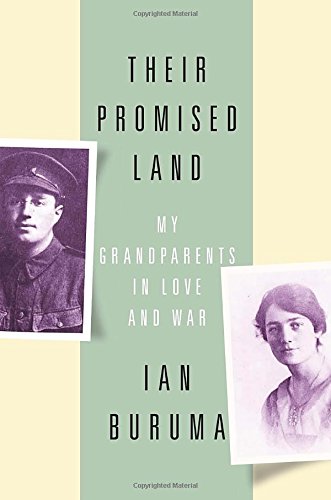 “a well-written, family memoir that tackles broad questions of identity . . .”

Their Promised Land is somewhat quirky: compelling and heartwarming in parts but also long-winded and unremarkable in others. Ian Buruma, the author, is well known in trans-Atlantic literary and intellectual circles as a journalist and socio-political commentator. He teaches politics and writing at Bard College outside of New York City. In this book he is at his best when he philosophizes about individual and familial issues within an often indifferent societal context.

Buruma’s grandparents of the title, Bernard (Bun) and Win had five children. Buruma’s mother was a Schlesinger daughter and his father a Dutchman. The young Buruma grew up in Holland but often visited his grandparents and the extended Schlesinger family in England. The book is developed around the extensive correspondence the author found, long after his grandparents’ deaths, in which with great loyalty and devotion they wrote to one another—whenever they were apart—through their long and frustrating courtship, the First World War, and then the Second World War. These letters are a remarkable record of an ordinary family living in extraordinary times.

Or maybe not quite such an ordinary family.

Both Bernard and Win were English born children of German Jewish immigrants who left Germany for England in the late 1800s. They lived within a few blocks of one another in Hampstead, now a polyglot and diverse suburb of London; then, a German Jewish enclave of wealth, privilege, intellectual fervor and passion for classical music. Aside from their love for one another, their children, and the English countryside, their love of classical music served as a formidable tie. Win was an accomplished violinist, Bernard a music aficionado. Music brought out his deepest emotions and often moved him to tears.

Bernard’s father amassed substantial wealth, and his generosity aided their large and growing family (five children including a son, the famed film director John Schlesinger, the author’s deceased uncle) to live in the manner to which Win and Bernard were accustomed—private schools, holidays abroad, large houses in the countryside—where Win became an adept gardener—stalwart in local village activities, and household help. As Buruma remembers, Christmas was a bravura performance for Win and Bernard, as if by outdoing the neighbors they could be persuaded that this assimilated Jewish family was of the essence of “county English.”

As Buruma tells us “everything about their lives seemed very, very English.” And, “Their loyalty to Britain and its institutions was perhaps extreme, but it came partly from gratitude. The society in which they were born and bred did not turn on them, as Germany had done on its most loyal citizens.” Still, many Britons regarded Jews in their midst as exotic and many resorted to ugly stereotypical responses. Win and Bernard’s pride allowed them to simply ignore these attitudes.

As a young man, Bernard, happy-go-lucky and a rugby player, scarcely completed high school before enlisting to serve in WW1. Win, a few years younger, studied at Oxford but interrupted her studies to train as a nurse at Beech House, a London hospital for injured British Jewish soldiers. Eventually she did graduate from university. After the war Bernard completed his medical studies but was refused a residency at a prestigious London hospital, and he later learned it was because of his Jewish ancestry. Nonetheless he enrolled again to serve in the Second World War and was posted to India as a medical officer who rose there to the highest ranks of medical service administration.

During his absences Win stoically kept the home fires burning in true British “stiff upper lip” fashion, raising the children, doing her duty as required for the war effort, and writing long letters of genteel country life to Bernard.

Undoubtedly their legacy rests on their efforts in the late 1930s to adopt 12 Jewish refugee children from Germany, arrange for their transfer, meet the trains carrying them, buy a house in London to house them, hire a young rabbi to look after them, and then to pay for all their studies. Among the most touching pages of the book are the descriptions of the constant reunions of these refugees with Win and Bernard as they became adults, married, and had families of their own.

Buruma explores with sensitivity questions of class, culture, and identity by looking at how his own grandparents lived as “outsiders who were insiders too.” As he writes, “Devotion to “the family” was perhaps the most Jewish thing about them. The family offered safety, protection, and a refuge. It is a recurring theme in Bernard’s letters and intimately linked to his idea of a “haven. . . . He cultivated a rather Victorian idea of domestic tranquility, a mixture of English coziness and German Gemütlichkeit, something Jews of a different class would have called heimisch.”

And Win, in her letter dated March 2, 1943 writes: “Today, while I was gardening, a time when many thoughts and philosophies run through my mind—I said to myself there are just two things in this world which make me proud and eternally thankful. One is that I am an English woman, privileged to live in the most wonderful country in the world, and the other is that I won the unique and faithful love of such a man as you.”

This book is the uplifting record of a good marriage through almost a century of great horror and darkness.